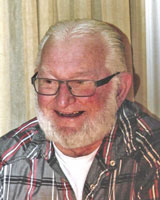 At the Prince Edward County Memorial Hospital on Monday September 21, 2020, Chuck Nutley passed away at the age of 71. Beloved husband of Gloria (nee Van Wart). Dear brother of Deanna Rosenblath (late William) and Darlene Nutley, both of Picton and uncle of Will (Amber) Rosenblath. Chuck worked as a mechanic for many years but was happiest on his Harley with Gloria. As he wished there will be no service and cremation has taken place. Arrangements entrusted to Arrangements entrusted to Hicks Funeral Home, 2 Centre Street, Picton. 613-476-5571 www.hicksfuneralhome.ca