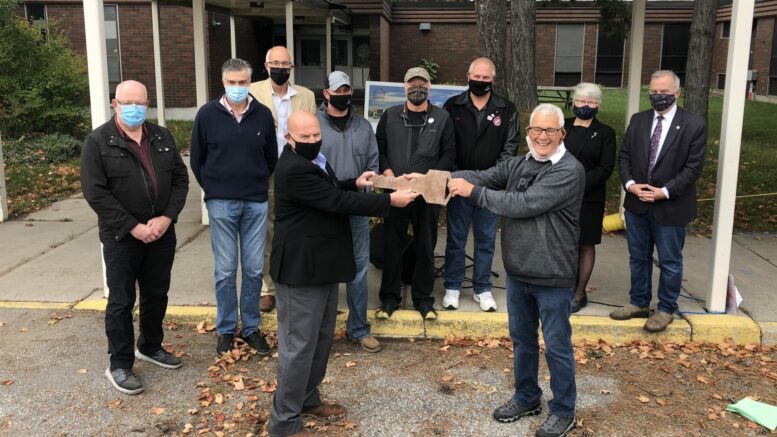 The final stanza of the opening hymn on an affordable housing concept for seniors in Prince Edward County has hit its high note.

Monday morning was a red letter day in Prince Edward County as the LoveSong Seniors Co-Housing and Community Hub Group took the keys to the former Pinecrest Memorial School from the County of Prince Edward. The group is aiming to have a multi-phase seniors co-housing project at the former school that was declared surplus to the needs of the Hastings Prince Edward District School Board three years ago and eventually sold through the Government of Ontario’s dispensation of property process to the municipality in trust while the group fundraised the $375,000 that covered 100 per cent of cost of the building and 20 acres of land.

On Monday, the key ceremony signified the monumental step of taking possession of the former elementary school and the start of planning, designing and creating 50 400 sq. ft self contained housing units. According to LoveSong, each unit would be equipped with a bed/sitting area, kitchenette, private bathroom/shower and doors to the inside hallways and outdoor space.  Under the not-for-profit’s plan, half of the units will be rented at fair market value and the other will be geared to income.

The existing gymnasium will serve both the residents of LoveSong as well as members of the surrounding community with access to recreational and cultural activities including fitness classes, theatre and hobby/meeting facilities – a cultural hub for Bloomfield. The large 20-acre site will provide space for a community garden, and lend itself to potential future partnerships as phase 2 -5 of the project are developed.

The concept of the seniors housing group was incubated at nearby Emanuel Baptist church and the the group stresses they are operating at arm’s length from any religious organization but board member Donna Rodgers told the assembled media and supporters Monday morning the LoveSong name was a tribute to King Solomon’s book in the Bible, Song of Songs where he shares his advice on how to build healthy partnerships.

“Both partners need to look for the strengths in each other and building the relationship together,” Rodgers said. “LoveSong Seniors Affordable Co-Housing and Community Hub is a partnership between many in the community supporting each other in a healthy, safe and fun environment.”

Fellow board member and the “Moses” of this concept from its genesis Ken How is a retired elementary school teacher and saw the needs of seniors in the community as well as the declining enrolment trends amongst the local public school board and was one of the first to put two and two together.

How said he was having trouble putting how excited he was to see this occasion come to pass after the better part of a decade trying to figure out a grass roots solution to the senior element of the local housing crisis.

“Affordable housing is one of the most difficult issues facing a community like ours. If we can get a partnership going with multiple levels of government and multiple partners, something good is going to happen and so far that’s been the case. And it needs to happen here,” How said.

Touching on the three R’s-Reduce, Reuse, Recycle- a large, institutional structure exists already so How figures 70 per cent of the battle has been fought and won and the quality of the Pinecrest Memorial build comes into play even half a century after the ribbon was cut opening Prince Edward County’s school of the future.

How added that any technical or architectural person that tours the facility can see it’s well structured.

“This school was built larger in 1967. It has the canopies out front and it has terrazzo flooring-you would never see a building like this with that type of flooring be built today, it’s too expensive…the basic building that exists here today is fabulous,” How said.

Looking ahead to the usage as a hub, how said the building has served in that in a prior capacity and would again. Plans call for office space to be offered to medical professionals and other types of professionals that would suit the needs of both residents inside the facility as well as residents of Bloomfield.

All told, LoveSong officials expect the cost of Phase One to be completed will be in the neighbourhood of $10 million.

Bay of Quinte MP Neil Ellis congratulated the board on a wonderful day that see their initial efforts bear fruit and added that grass roots projects such as these put “Unity in the Community.”

“Affordable housing is one of our main government planks so now we are going to have to find some money to help you along,” Ellis said. “When you talk about this concept of co-housing hand have doctors and nurses and medical professionals in the facility, this is an idea that is going to spread well beyond Prince Edward County to places across Ontario and across Canada. This is a great model to build on”

A former accountant that was just steps away from where teachers instructed students on arithmetic, Bay of Quinte MP Todd Smith’s assistant David Joyce crunched the numbers and the sum added up to

“If you have a senior-based population that is 13 years higher than the provincial median and widening and many of those on fixed incomes and, during the the last ten years, the housing price has increased seven times the median income-the sum is an uncomfortable situation for many people in this community,” Joyce figured aloud.

But this also allowed for creative solutions to germinate and grow and Joyce said MPP Smith was pleased to see such a solution come forth from the community that could have a positive impact on the municipality and its senior residents.

County of Prince Edward Mayor Steve Ferguson spoke last and admitted that affordable housing was a significant issue in the municipality but Monday’s ceremony is one of several critical first steps that are taken in the coming years to address such a problem.

“The board have just done an unbelievable job to get us to this point, and this is a terrific step forward for our community,” Mayor Ferguson stated.

The LoveSong group anticipates the $10 million project to commence Fall 2021 and opening the following year under the direction of the Springale Development Corporation and Andy and Phil Spry.

In preparation, LoveSong are applying for grants from the federal, provincial and municipal governments, fundraising and will be preparing the site for the remodelling by removing existing cupboards, lockers, blackboards and assorted furnishings. These items will be available on community yard sale web sites.