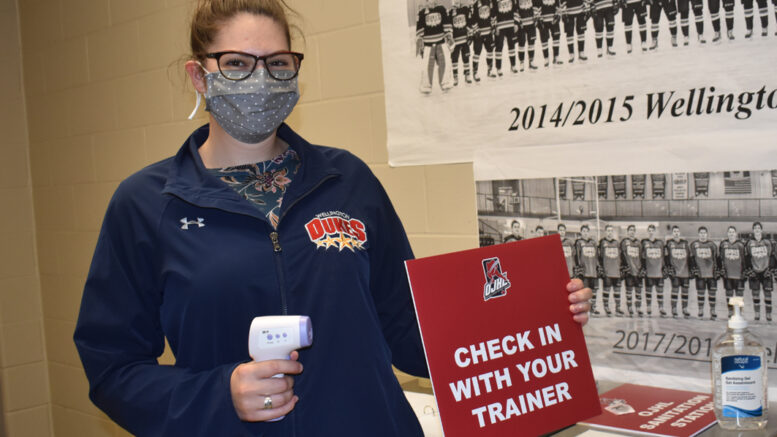 It wasn’t a sweltering day in August.

The who’s who of Junior A hockey prospects hadn’t descended upon the village.

No, in 2020, the Wellington Dukes, who had been working out at the Strathcona Paper Centre for the last six weeks or so, quietly and under the strict protocols of Hastings Prince Edward Public Health, the County of Prince Edward and the OJHL, moved into Lehigh Arena last weekend in the strangest start of junior hockey in Prince Edward County.

So many questions were left hanging in the air as the Dukes have done as the rules call for over the past few days. Focus on skills development and away from scrimmages. Limited numbers of players on the ice at one time. COVID-19 screening at every opportunity including daily temperature readings. 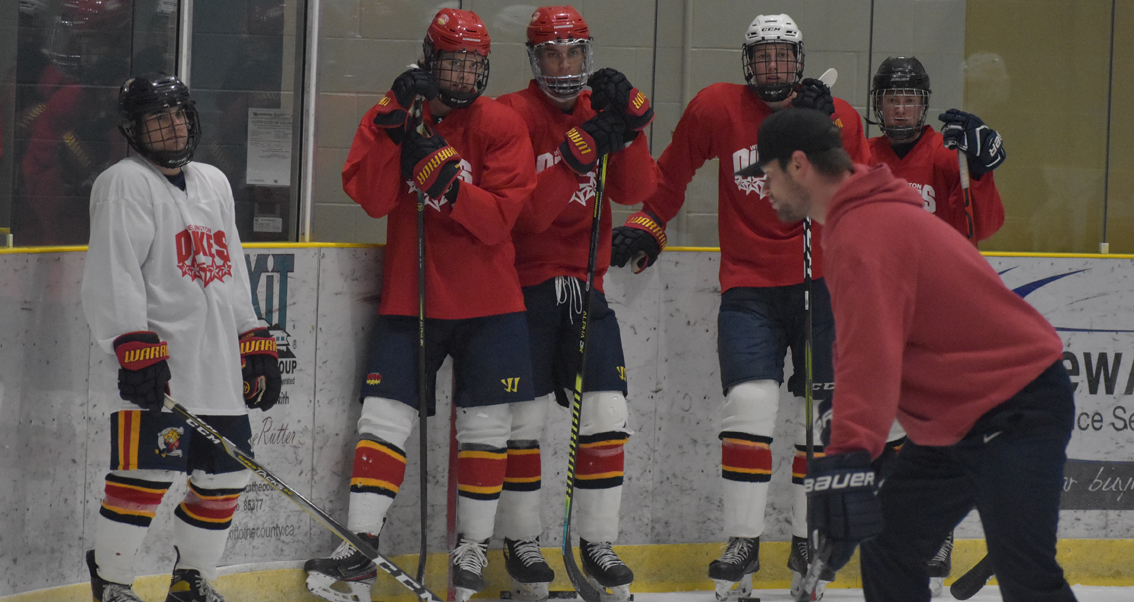 UNDER A WATCHFUL EYE Members of the Wellington Dukes keep an eye on Head Coach and former NHLer Derek Smith during practice Monday. As part of the OHF’s Return to Hockey frame work, the club is allowed to have a limited number of players on the ice for skills and development training. Scrimmage and battle drills are hoped to come sometime in the near future. (Jason Parks/Gazette Staff).

Such a training camp would be impossible to describe to a Dukes fan awakening for the first time since last October and wondering how the locals are faring in the OJHL’s East Division this year.

Dukes skipper Derek Smith spoke with the Gazette Tuesday and said his team was chomping at the bit for some game action and while there are some working theories on when and if that might take place, this time of transition and limited activity that stems from Hockey Canada and flows through the various levels of the game was not being wasted in Wellington.

“We are just trying to take advantage of the situation and spend more time than we usually would on skill development,” Smith said. “If the season was going on right now, we would be spending our practice time on systems, preparedness and getting ready for our next opponent.” Smith said

Skating, shooting and passing drills were the order of the day-as well as working out. Anybody that’s been by Lehigh during the early afternoons might have seen a gaggle of Dukes lifting weights and conducting strength training drills in the recent glorious October sunshine.

But like professional soldiers methodically honing their skills during extended peace time, the Dukes are preparing for a day that may or may not come.

The working theory about Ontario’s junior hockey leagues as late as August was that if there was a quelling of COVID-19 numbers that leagues might start in early December.

With recent escalation in numbers, that idea is out the window and for the OJHL as a whole the news is worse. 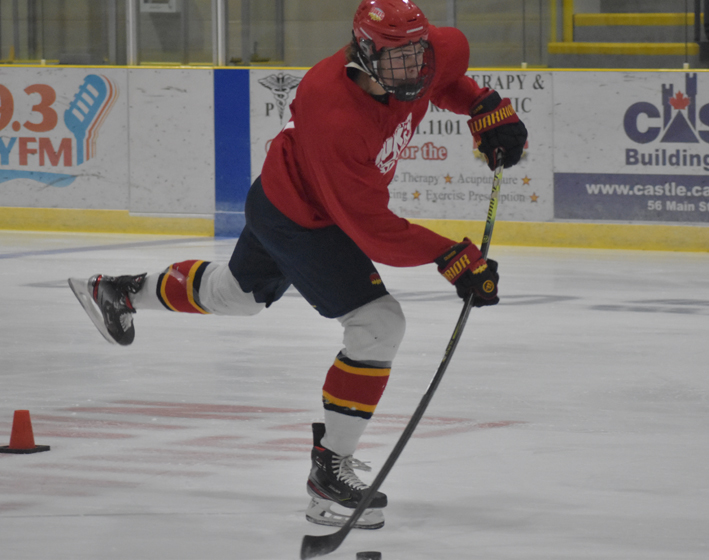 SNAPPING INTO ONE Wellington Dukes forward Brodie McDougall is one of seven veterans anxious to get the 2020-21 season underway. (Jason Parks/Gazette Staff).

Saturday saw two significant announcements dump a few gallons of cold water on any hopes of a regular start.

First, the Ontario Hockey Federation said it was pausing its return to play ladder where it currently was due to increased cases (limited on ice training, no games) and, secondly, the Greater Toronto Hockey League, the world’s largest minor hockey organization announced it was stopping all activities until Jan. 4. 2021.

Toronto is a COVID hotspot and also home to the majority of OJHL teams leaving the activities of clubs such as the Junior Canadiens, Patriots, St. Mike’s, North York, Markham, etc in doubt for the time being.

Down here in the hinterlands of the OJHL, it was hoped by both clubs that an exhibition game between Trenton and Wellington could take place sometime towards the end of month but those plans, like most everything else in this coronavirus reality, are very much in a state of flux.

Smith admitted his charges were eager to get into some kind of game action but the organization was doing its part by adhering to the letter of the law.

“Every day we are making sure we are keeping our kids and our billets and families safe so that if we do get the ok from the OHF, Public Health and Hockey Canada, we are ready to go,” Smith said.

Congregation away from the billet homes are more than frowned upon by the club and Smith believes the players are all on the same page. With a glut of veterans including seven overagers vying for a spot on the team, Smith said it isn’t hard to find leaders amongst the players taking the ice for practice everyday.

“There’s a group of guys here who have a lot of unfinished business in this league and the clock is ticking on what their plans are for next season whether it’s NCAA or CIS. Then we have a really good mix of young guys who are desperate to try and establish themselves in the OJHL and that makes for 25 players that have high levels of motivation and they are all treating every day like an opportunity to get better and build themselves,” Smith added.

Moving into the Dukedome and back into what Smith called one of the best facilities for Junior A hockey in the country was a welcome process and the coach said the players have enjoyed coming to the rink-their rink.

“We were happy to get on the ice in Napanee but now we can spend time in our dressing room, workout, get treatment and the guys can hang out in a safe and fun environment before and after practice. I can tell already it’s very benefical for this group,” said Smith.