As LoveSong Seniors Co-Housing and Community Hub Board member Ken How gave an account of all the steps that had been taken, the bridges that had been crossed, hurdles that had been over come to reach the point where the not-for-profit organization were able to take possession of the former Pinecrest Memorial School Monday morning at a key ceremony with the municipality, your humble scribe could think of only one thing.

Anyone who was taught by Mr. How or had children taught by Ken How at one of several local elementary schools in Prince Edward County he served at likely know where the Gazette is heading with this.

With deepest apologies to Colleen Kelly, Gayle Fox and Mac Cirtwell, Ken How just barely edges those aforementioned educators in the personal favourites column of teachers that offered elementary instruction at my beloved South Marysburgh and Athol Central Schools.

That’s probably because How was and remains an innovative, inspiring mind who has never stopped learning and draws on all the benefits experiential learning has to offer.

How organized lunch time and recess intermural sports like floor hockey and soccer. Field trips were taken by the score. Pop music would quietly play from his radio during lunch time. It was daily doses of Whitney Houston and Glenn Frey over peanut butter and jam.

During class, How was energetic and positive in his daily lessons to a degree this student seldom experienced during his school career. 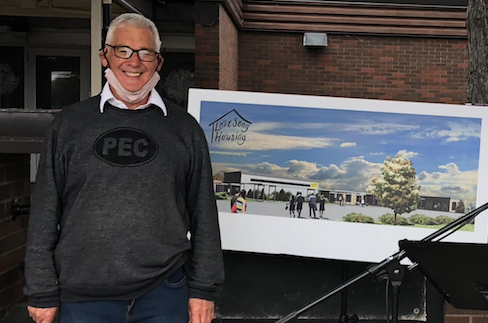 To say How was way outside the box in his teachings and probably gave more than one principal a stress headache or three is still completely underselling the teacher’s creative and inspiring methodology.

One early spring day, the students were introduced to a large stainless steel device that looked like a drum. Inside were something like two dozen eggs that were about to be incubated right inside the classroom at South Marysburgh Central. Broiler chickens would later hatch and then the chicks would be handed over to the students to keep and observe at home. I can only imagine some of the conversations between my classmates and their parents when they showed up with a six week old chick in a paper box as they got off the bus one day after school.

But this is who Ken How is. He doesn’t see problems, he sees opportunities.

While the 2018 Vital Signs put into numbers what kind of housing crisis Prince Edward County residents were facing, How and a number of others at Emanuel Baptist Church had already visualized the storm gathering on the horizon. Fixed income seniors were losing the ability to stay on top of their rising tax bills and those that were looking to down size in their golden years and transition to a rental property faced a tough, uphill task in finding suitable accommodations.

The last Vital Signs accounting of the local housing landscape shows prices have almost doubled in the last decade and more than seven times the increase in the median household income. And those figures are at least three years old so you can bet the disparity has grown even more severe due to short term accommodation proliferation and the Toronto housing bubble which directly influences what’s happening in Prince Edward County

The concept of a community hub and co-housing project at the former school that was a well built Canada Centennial project in the late 1960s was slowly incubated at the church. On Monday, the first signs of LoveSong’s eventual life peeked out of its shell. LoveSong and the 50 units that are called for in Phase One won’t come close to solving Prince Edward County’s housing crisis.

What it will do is offer a life boat to people who have made this community their home for decades and, on a more global scale, hopefully inspire all levels of government to think outside the box, look at vacant institutional buildings and get creative to local affordable housing issues.

Get creative. Just like Mr. How did every day when he educated thousands of Prince Edward County children. 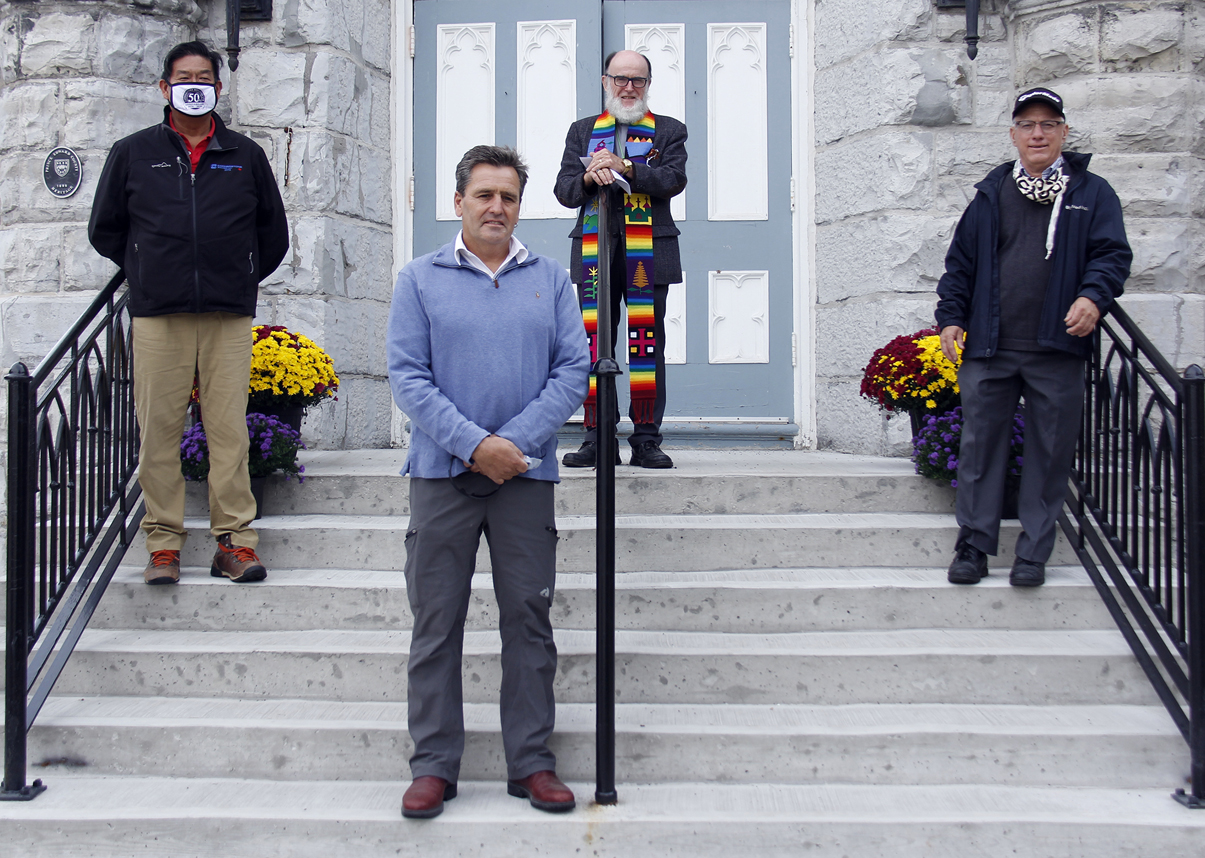 STEPPING UP – Sunday at Picton United Church saw the dedication of the rebuilt front entrance stairs. The step design was taken from the original steps of the church and were funded by the Geraldine Marie Elliot bequest, a Prince Edward County Heritage Project Grant and the Picton United Church Memorial Fund. Pictured are (from left) project engineer Peter Yee, Patrick Kavanaugh of Carraig Inc, Rev. Phil Hobbs and Don Hadley of the Picton United Church Property and Finance Committee (Desirée Decoste/Gazette Staff)