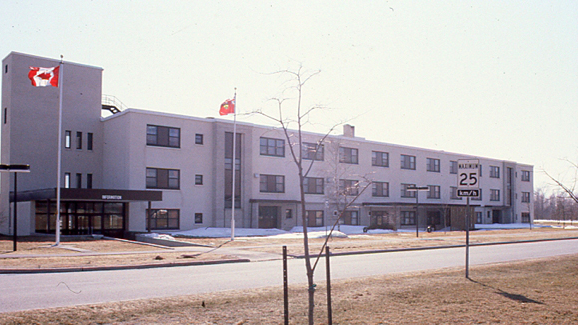 Prince Edward Heights during its time of operation in the 1980's. (Ontario government photo)

There’s more to Prince Edward County than wineries and restaurants some of which will be highlighted in renowned storyteller Suzanne Pasternak’s upcoming docu-series ‘Voices from the Past: A Retrospective from Prince Edward Heights’.

The series is set to premiere Thursday, October 15th on 99.3 County FM as part of the non-profit, volunteer driven community station’s 6th Anniversary.

The Heights, as it would come to be known, was a facility for those with intellectual disabilities built on the grounds of the abandoned WWII Bombing and Gunnery School known as CFB Picton.

The Heights, also known as the Craig Complex, was opened in 1971 and closed during a provincial restructuring in 1999, during which time people from across Ontario would come to call the facility home.

The project was funded by the federal government’s New Horizon’s for Seniors Program.

Speaking with the Gazette, Pasternak explained her reasons for wanting to draw attention to the Heights and the surprising truths she found in stories shared by ex-employees, families of residents etc.

“A lot of older people have a lot of knowledge and experience, so that was part of the rationale to reach out to people in the community,” said Pasternak.

After reaching out to Craig Mills at the local radio station, Pasternak applied for the federal grant to enable her to complete this series.

Like many who’ve lived or grown up here, Pasternak admits she knew little about the history of the facility before going into this project.

Pasternak recounted how the day her grant application was approved was the same day the government announced a lock down. Like other researchers and artists, the time of isolation allowed Pasternak to go deep into the history of the Heights.

“I focused on the history, how the residents were treated, how they were neglected, what rights they had, and I was able to talk on the phone to a few people who worked up there,” she explained.

Among those she conversed with was a former physician at the institution and a few former councillors.

Pasternak noted that, despite physical distancing restrictions, she endeavored to interview as many people as possible-whether in corn fields or other outdoor spaces.

“What I quickly realized was how incredibly special and almost revolutionary the concept of the Heights had been,” she said.

The facility had been a solution to large-scale institutions, such as those in Orillia and Smith’s Falls, which had garnered a murky reputation for their treatment of those with disabilities.

“Thousands of people were housed in ward-like settings in these big institutions when the idea came about to start moving clients out of that situation into the community through the Community Living Movement, which gained traction across North America in the ’70s,” said Pasternak.

Consequently, in 1971 those with disabilities who had been housed in larger institutions found themselves in what Pasternak described as the village-like setting of the Heights.

“The culture in the County…it was not an institutional town like Orillia or Smiths Fall’s that had this massive institution for years,” she explained. “The one in Orillia was built in 1876. Whereas, we were just a bunch of sweet, gentle farm people and commercial fishermen. It was a different culture altogether.”

There were houses close by for staff, baseball fields, schools and churches. As Pasternak noted, one of the remarkable initiatives on the part of the provincial government was to advertise jobs across Ontario and provide housing for staff, along with the aforementioned facilities.

“If they got hired, they could move there with their dogs, kids, cats-everybody. So, the staff worked on the Heights and the children were there with them and became very involved. Many of the teens worked summer placement jobs there too,” added Pasternak.

The Heights also differed from other institutions in that they facilitated outreach for families who had been encouraged, through other institutions, to leave their children or family members in the care of others.

Some families had not seen each other in decades.

“At the Heights, there was an outreach to these families who hadn’t seen their siblings or children in, sometimes, 20 years,” said Pasternak. “There was a tremendous reuniting of families with the clients and that was really unique. The more I heard, the more I understood how incredibly special that time at the Heights was.”

In 1999, the provincial government mandated that all institutions, such that in Picton, should close down and clients were moved to group homes within the community.

“Put all the different stories and perspectives together like a quilt and, certainly, the pattern of that quilt revealed a heartfelt institution. It was revolutionary. There were many aspects of it that should never have closed. I hear that over and over again,” said Pasternak.

Pasternak encourages those with stories of the Heights to contact her in an effort to preserve this important part of local history.

“I don’t have a cut-off (for receiving stories) because those oral histories are really important,” she said. “Maybe we’ll have to do another six episodes next year.”

To learn more, tune into ‘Voices from the Past: A Retrospective from Prince Edward Heights’ airing on 99.3 County FM as a six part series, beginning October 15th at 12:10 p.m, rebroadcast at 6:10 p.m.