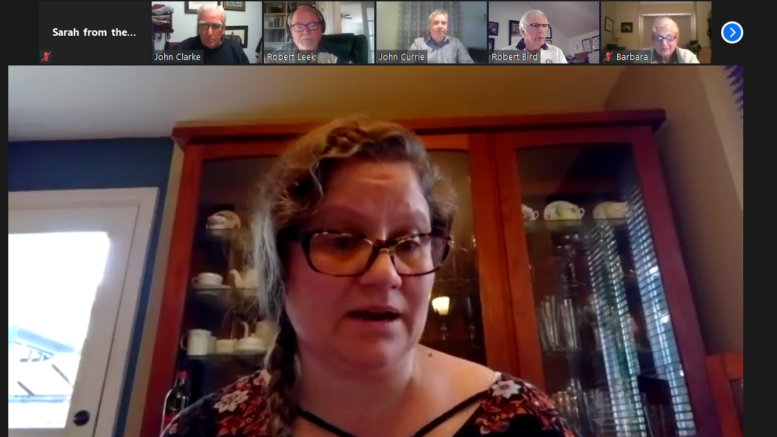 HIP began in Southern Ontario in 2014 with a small group of Rotarians who had a vision of creating a nationwide organization wherein Indigenous and Non-Indigenous Peoples could build relationships, thereby forging a path to the future.

HIP is comprised of board members from coast-to-coast, as Patterson explained. Those members consist of 50 per cent Indigenous and 50 per cent Non-Indigenous Rotarians, she explained.

“As mamy of you know, Rotary is more than 110 years old. As Rotarians, I’m sure you all understand what we’ve been doing and our areas of focus,” she said. “Most recently, that includes honouring Indigenous peoples.”

Patterson posited that in order to build relationships between Indigenous and Non-Indigenous peoples, there needs to be a greater understanding of the past.

“Indigenous people have been in Canada since time immemorial,” said Patterson. “Whether they crossed over to North America through the Bering Strait or earlier, it’s easy to say this land has been inhabited by rich cultures for thousands of years.”

She then pointed to the two row wampum belt, that represents a pact made between the Haudenosaunee people and the early Dutch settlers in 1613 New York. As Patterson described, the belt represents European boats following one path and the Indigenous canoe following another.

“They don’t meet, but follow a straight line, representing that they can live on this land simultaneously without having to interfere in each other’s lives,” she said.

In the case of settlers and Indigenous peoples, perhaps the path to hell has been paved with good intentions. Regardless, Patterson outlined several distinct acts of brutality inflicted against Indigenous peoples up until very recently.

“In 1830, residential schools opened, taking children with the explicit purpose of assimilation,” she said. “Continuing with that, we have the Indian Act, which is still in existence and the treaties. Also, it wasn’t until the 1960s that Indigenous people had the right to vote.”

Apart from this, the now infamous 60s scoop furthered the federal agenda of assimilation by taking Indigenous children from their homes and placing them in the homes of white people, she noted.

Patterson also pointed out that it wasn’t until 50 years after WWII that Indigenous people were finally allowed to lay wreaths at the National War Memorial.

“Indigenous peoples didn’t have the same rights as Non-Indigenous, and were often put into the most dangerous situations in battle,” she said. “Our country did not offer them respect in return.”

Despite these misdeeds, Patterson pointed out that it was nearly a decade before Canada adopted the United Nations Declaration on the Rights of Indigenous Peoples (UNDRIP). Even after signing UNDRIP in 2016, the government has yet to ratify it.

For these reasons, building relationships is paramount to successful reconciliation. And according to Patterson, even simple actions can help to do so.

“Visit a community or friendship centre, attend a cultural sensitivity course, take an online Indigenous History course, or attend a pow wow (when they’re being offered again),” she encouraged.

HIP is the first and only service group of its kind to be created nationwide, commented Patterson. With a mission statement that includes effecting societal change by inspiring Indigenous and Non-Indigenous relationship building, strengthening community building and advancing the next generation of leaders, the organization relies on education and awareness to further their cause.

“We can do more together than alone and right now joining is free,” added Patterson.

Rotary member Rob Leek inquired as to whether or not HIP offers any advocacy or intermediary help when there’s an issue, such that which transpired recently with lobster fishermen in Nova Scotia.

Currie responded that, though they’re not a group interested in “getting in the middle”, they have been contacting by Rotary Clubs out East who recognize HIP as peace builders.

“We are not an advocacy group,” offered Snyder. “We have a charitable number, so there’s a limit to what we can do in terms of advocating but we can make people aware through education.”

Furthermore, Currie noted that there are currently 1.2 million Rotarians around the world, which can make a huge impact with regards to building relationships.

“Reconciliation is not a check box, it’s a long term commitment,” he added.