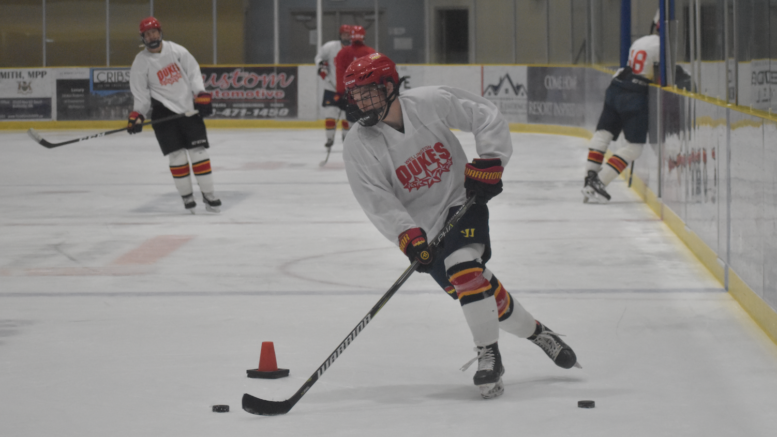 Since their rebirth from the former Belleville Bobcats to the Wellington Dukes, the junior hockey organization has been a family affair.

From the Lavender patriarchy to more recent times to brothers Panetta, Massie and Brown, bloodlines have seldom failed the Dukes. That successful trend appears to be set to show its face again as the hockey club will be breaking out a familiar name bar when it comes time for such matters.

Owen Carlile, brother of recent Wellington graduate Declan Carlile was twirling around the Lehigh Arena ice on Tuesday afternoon, settling into his new digs and, like every other one of his teammates, real eager to play a hockey game against somebody.

As a 17-year-old rookie, Owen will likely want to follow in his big brother’s footsteps in both the short and long term.

As he got more acclimated to the Ontario Junior Hockey League, Declan Carlile gradually blossomed from an unknown into one of the loop’s premier defenders in 2017-18 and his strong play with tandem rearguard Zach Uens provided the Dukes with sound defence and mobile, quick strike offence from the blueline. 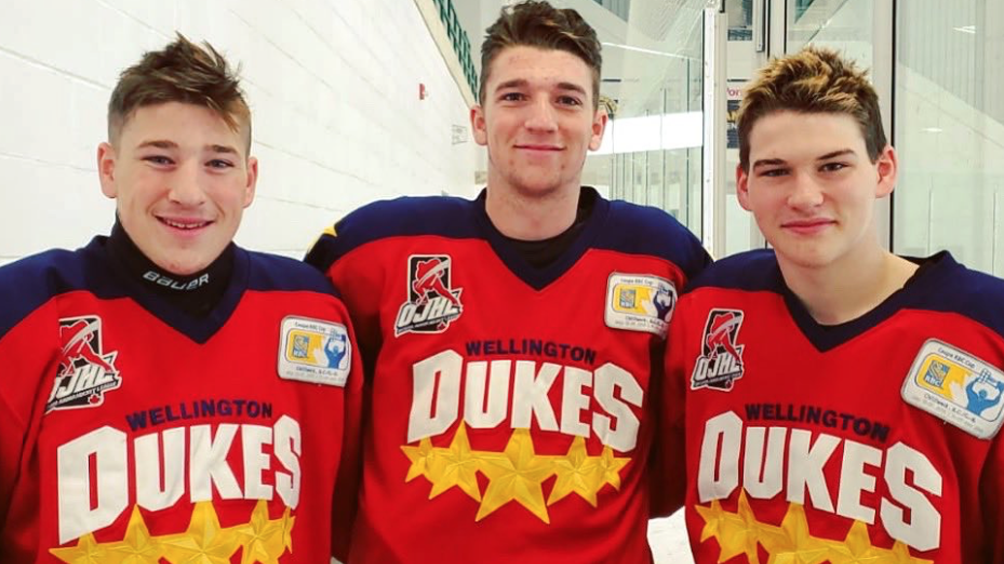 The senior Carlile would snipe a half dozen goals and add 33 helpers in the regular season for 39 points and his play was noteworthy on Wellington’s march to the Buckland Cup, Dudley Hewitt Cup and the Royal Bank Cup finals.

Declan Carlile will suit up with Merrimack of the NCAA this season and Owen is hopeful that an NCAA program is in his future also.

“I just know the coaching here is great and I know this program is really good at helping hockey players achieve that next step,” Carlile told the Gazette.

A dual citizen, Carlile will be staying with some family friends in Wellington as did his brother during the latter’s lone season.

“Declan really loved his time here in Wellington, in this community and he said this program would be perfect for me at this stage of my career and given where he is now and I can’t help but follow his advice,” Owen added.

Declan Carlile was on the 2020 NHL Draft Watch list and is hopeful that sometime down the road he will get an invite to an NHL training camp and while Owen might not get a chance to play in front of a trademark Dukedome crowd, he has experienced a high stakes game involving the beloved hometown squad.

“I attended Game 7 against Newmarket (in the 2018 Northeastern Conference Semi Finals) when Colin Doyle scored in overtime and it was an unreal atmosphere in here,” Owen recalled.

Prior to making the trek north and starting his Dukes career for good, Owen Carlile had a chance to impress Wellington brass in the summer of 2019, playing with a Dukes entry at a showcase tournament in Toronto.

To say the organization has been keeping tabs on him as he plied his trade with the Oakland Grizzlies AAA program in the vaunted Detroit minor hockey ranks would be apt. 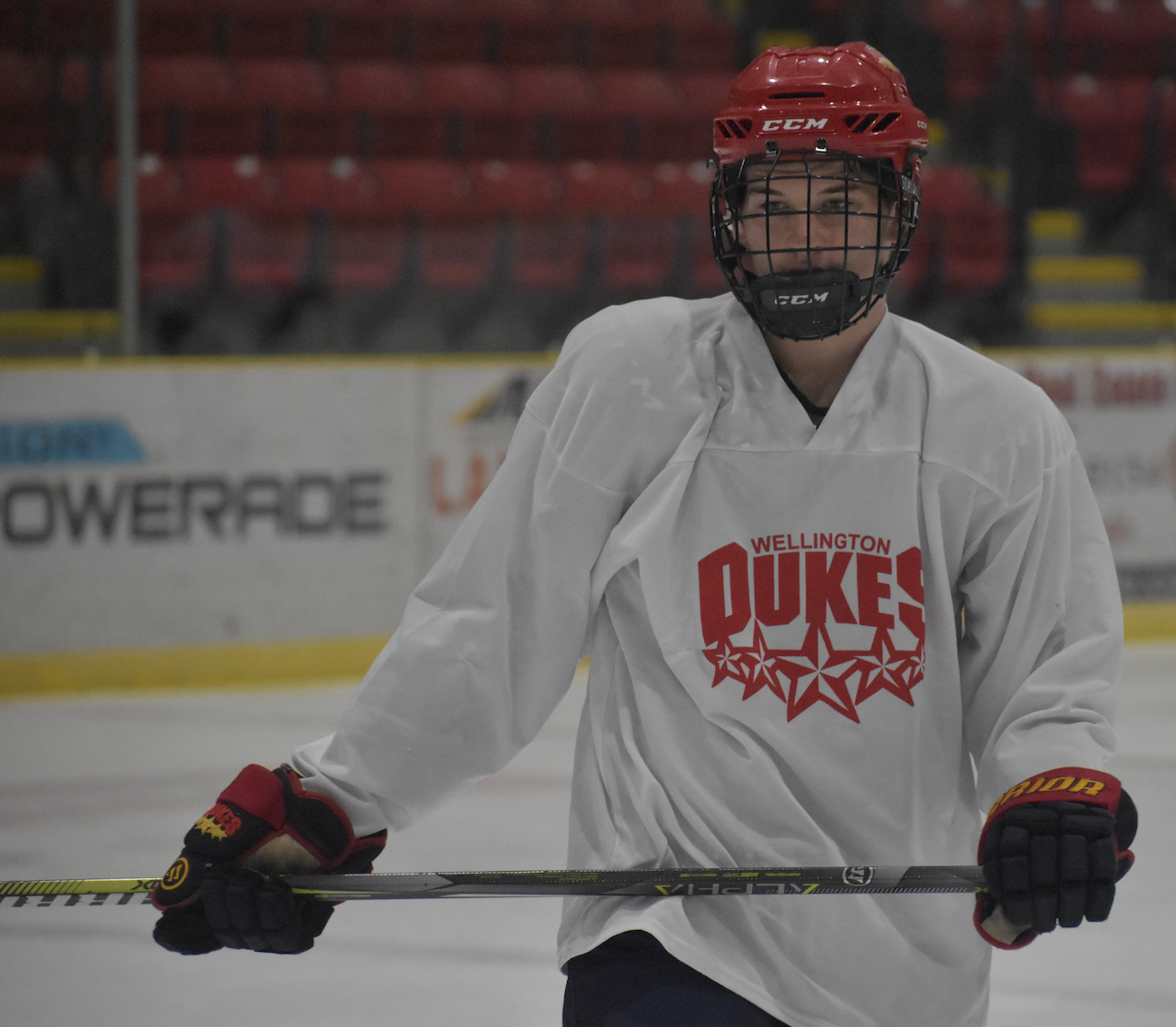 Dukes coach Derek Smith said the right handed pivot impresses with his speed, ability to make plays at high tempo and his game away from the puck.

But most of all, it appears Wellington has a good citizen in the dressing room and connected to the organization.

“We’re really excited to see what Owen can bring to the organization and after having his brother here for our RBC run, the one thing that really sticks out is what quality people the Carlile family are and how dedicated they are to the sport of hockey,” Smith said, “Owen comes to work every day with the goal of getting better. His hockey IQ is really impressive and he has a very good skill set. For him, it will be about adjusting to the size and pace of this level.”

As a first year Duke, Owen added the veterans have made him feel at home, especially as he acclimates to living in Canada.

As Carlile was about to take the ice on Tuesday, somebody yelled from the dressing room about the upcoming U.S. Presidential Election. When canvassed about his thoughts from this reporter, Owen was already laughing and not making his political leanings public. “I always try to steer clear of all that,” he said with a laugh.

LEDES AT LEHIGH: Smith is hopeful for some kind of exhibition game with Trenton in the next couple of weeks although it appears the COVID-19 protocols regarding hockey will mandate any tune up is non-contact played in an empty arena. The coach said he’s happy with the team as it stands currently but, like the other OJHL clubs currently on the ice, no one is too sure as to their grading until an opposing entity is lining up for a face-off…While Carlile went undrafted, Uens had his name called via the online version of the NHL Entry draft earlier this month, getting picked up by the Florida Panthers in the fourth round, 105th overall. Uens told Scuttlepuck.com former NHLer Bryan McCabe contacted Uens to let him know the Cats had called his name. Heading into his sophomore season, Uens said he was focussed on the upcoming NCAA season and developing further into a pro hockey prospect.