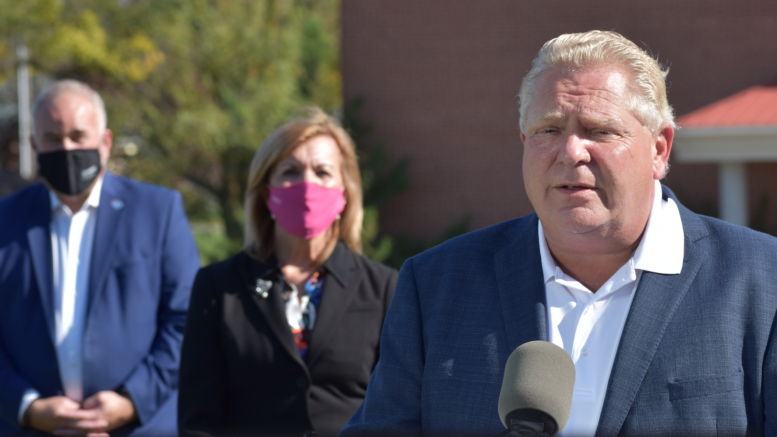 Premier Doug Ford, Minister of Health Christine Elliott and Bay of Quinte MPP and Minister of Children, Community and Social Services Todd Smith were at Prince Edward County Memorial Hospital on Friday afternoon to make firm their government’s commitment for a new hospital in Picton.

Ford announced his government is investing an additional $8.7 million to support the planning and design of the new Prince Edward County Memorial Hospital. Once complete, this new state-of-the-art hospital will replace the existing aged facility, expand capacity, improve access to quality care and help end hallway health care for patients and families in Prince Edward County. 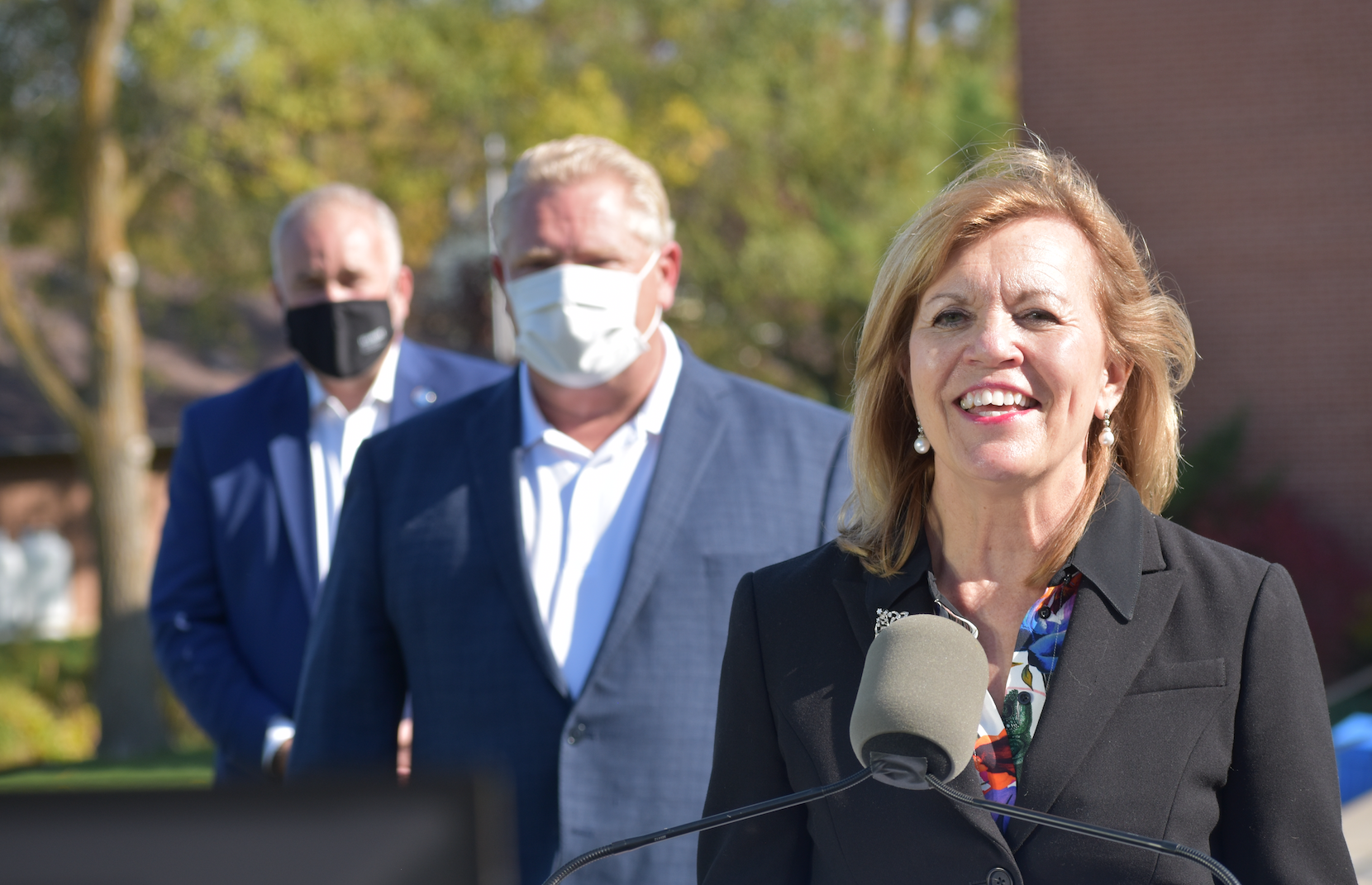 “Our government continues to make critical investments in our hospitals from one end of the province to the other,” said Premier Ford. “Today’s investment is the first step in delivering a new hospital for the people of Prince Edward County that will not only create jobs and support local suppliers during construction, but once built, deliver quality patient-centred care in the community for years to come.”

The new PEMCH will provide patients and families in the region with the following:

The helipad currently located at the hospital will be relocated to a nearby location, ensuring patients continue to receive emergency air transport and access to critical care services. Following design of the new hospital, project procurement is expected to begin in 2021. The procurement process will ensure a fair, open and transparent selection of a proponent to begin construction on the new hospital.

“Investing in major hospital infrastructure like the new Prince Edward County Memorial Hospital will help patients and families receive the connected, high-quality care they need, when they need it, close to home,” said Minister Elliott. “This investment is part of our government’s plan to end hallway health care and build a modern and connected health care system centred around the needs of patients.”

“Today’s significant investment for planning provides tangible evidence that a new state-of-the-art Prince Edward County Memorial Hospital will be built to meet the evolving and emergent needs of this community,” added Minister Smith. “Our government’s commitment to this project will strengthen the health care system in our region and bolster the local economy and residents’ quality of life.” 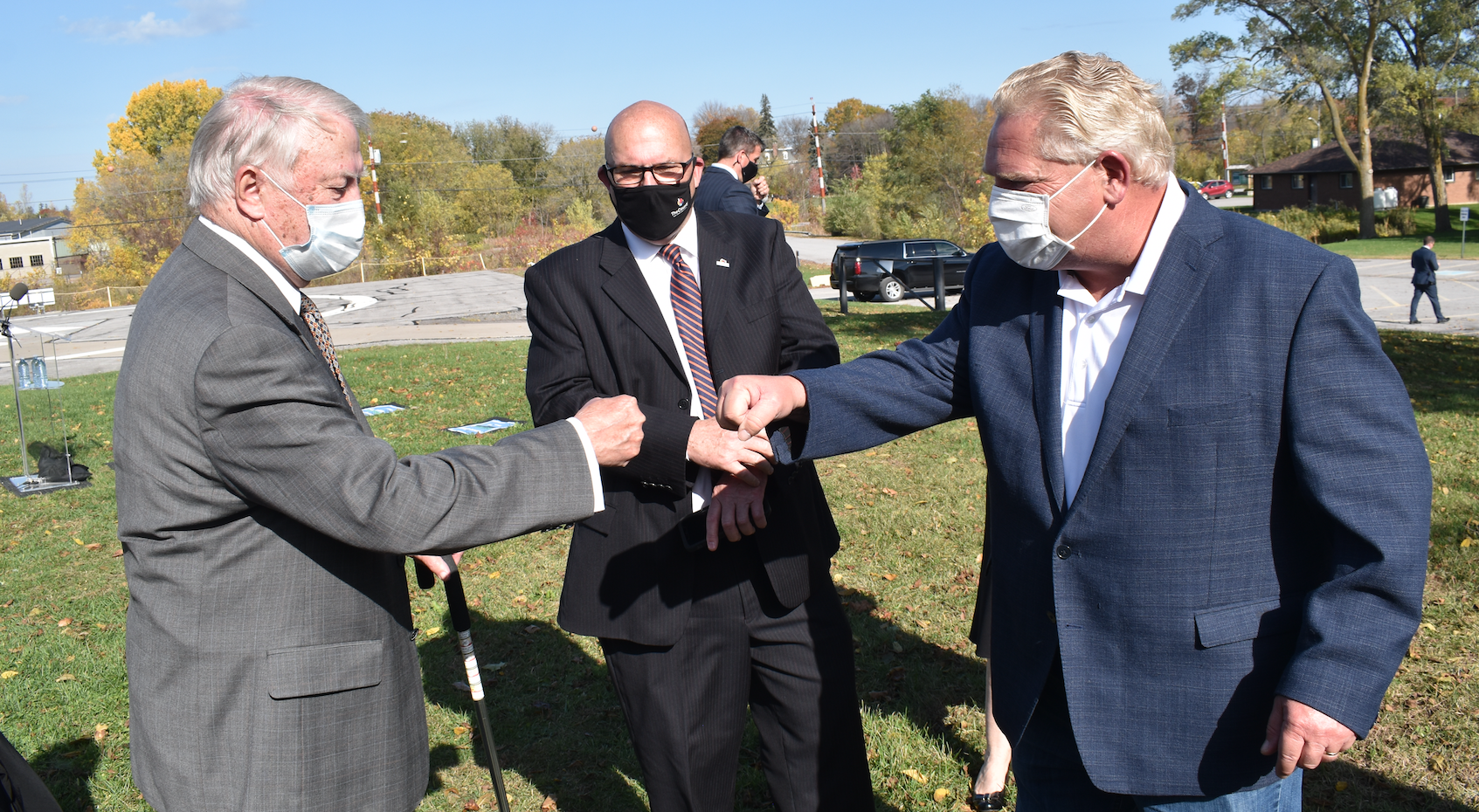 Rural hospitals like Prince Edward County Memorial Hospital play a critical role in ensuring equitable access to high quality care for patients and families across Ontario. This new hospital in Picton is part of Ontario’s investment of $27 billion over 10 years to build new and expanded hospital infrastructure.

Coull explained the Foundation has the lead responsibility to raise the community’s share of the funds required to build the new hospital.

“The cost is estimated to be about $87 million and  the provincial government will pay for 90 per cent of the building costs as well as the planning costs moving forward,” she said. “The funding grant announced on Friday will be used to complete the design, working drawings and contract documents for construction of the new hospital.”

She said the new hospital is a project that involves two significant funding partners- the Provincial Government and our community of donors.  The community’s share is estimated to be $16.5 million which is approximately 10 per cent of the building costs plus all of the new equipment for the new hospital.

All funding received or announced by the Ontario Government is related to their share of the costs of the project and does not have an impact on the community’s $16.5 million share and while that goal is firmly in sight for the Foundation, now would be an ideal time for those that haven’t to dip into their pockets and provide what they can for a state-of-the-art hospital for Prince Edward County.

“What is significant about Friday’s announcement is the fact that Ontario now has skin in the game. The fact that we are seeing the funds flowing so quickly, on the heels of the province’s budget announcement in September, is testament to the Province’s commitment to see this project move forward,” Coull added. “Our Back the Build campaign just got a lot more exciting and the Foundation looks forward to working with the entire community to reach our goal.”

In organizational terms, there was an individual with significant skin in the game pleased to see this project just over the horizon.

“Building a new Quinte Health Care Prince Edward County Memorial Hospital represents a collaborative effort reinforced by the unwavering support of our partners and the community we serve,” said Mary Clare Egberts, President and Chief Executive Officer, Quinte Health Care. “We have all spoken with one voice about the need for a new hospital in Picton and the government has heard this message and has taken action. We are grateful for today’s announcement, which provides the necessary funds to support the next stage in planning for our new hospital.”

Egberts, who is set to formally retire at the end of 2020 and was a champion of the new PECMH project mentioned to the Gazette is was vital the province approve this project so it was perhaps appropriate that the stars aligned to have her at Friday’s ceremony.

The President and CEO has had her hand on the tiller of the beloved facility and recalled that the very first interview she gave when she took the job overseeing the QHC organization was in regards to PECMH. She also added seeing a new PECMH built would be a fitting cap to her legacy at QHC.

“This community did a tremendous job in educating me and explaining the unique geography and why it was so essential to this community-the population as well as the influx of summer visitors to this area…It was mentioned about the average of folks in the County versus the rest of the province and those are the individuals that are going to need the hospital,” Egberts said.

The President and CEO mentioned the current PECMH and the new facility will remain key components in the QHC array and that’s evidence by the regional endoscopy service that thousands of Quinte-area patients utilize annually.

“The community can be incredibly proud of the services that are offered and will be continued to be offered in Prince Edward County and the physicians and staff that always go above and beyond to make this facility what it is,” she added.

After the formal announcement Smith  surveyed the grounds and noted many people who have remained steadfastly passionate about PECMH such as former County of Prince Edward Mayor and past Chair of the PECMH Board and later the Foundation Leo Finnegan in attendance to witness this momentous day.

From his time in opposition to Friday, Smith has remained a supporter and advocate of PECMH, bringing and highlighting the hospital’s cause to the halls of Queen’s Park time and time again no matter which side of the Ontario legislature he’s been sitting on.

“There’s a lot of people that are standing around us that have played just as important a role if not more so than I have. Their voices got to me that got to then Health critic Christine Elliott back in 2012, and then things went our way and we’ve been able to accomplish these things that this community has really wanted,” Smith said, pointing to vocal supporters of the PECMH Foundation, Auxiliary and the Prince Edward Family Health team who have played a key role at one point or another in seeing this day through.

Mayor Ferguson told the Gazette he was thankful for the visit from the Premier, Minister Elliot and MPP Smith and his worship took the opportunity to speak to the high profile delegation about other conerns including County Road 49 and Sandbanks Provincial Park.

But Friday was about this community’s next ‘House of Healing’.

“I hope the community recognizes the importance of them coming to formalize the funding and we are looking forward to getting this project underway,” the Mayor said.

Ferguson said a fully serviced hospital is crucial to any community however, in an area where the average age is 13 years older than the provincial median and, as residents tend to be more frequent users of health services as they grow older, a new PECMH is especially critical to this community.

Add the age demographics of Prince Edward County to its summer time popularity when the population seems to ebb and flow with the summer weather and the local hospital becomes exponentially important in everyone’s day-to-day life.

“This summer, I think everyone realizes Prince Edward County was jammed with people with few alternatives for summer travel. They couldn’t visit the U.S. and they couldn’t visit other provinces so they came to Prince Edward County and populated out amenities but when we have visitors, their health and safety should something happen is important as well and we need to ensure we have medical facilities when we have that increase in population,” Ferguson stated.

The Mayor also lauded the community that’s remained so passionate about a new or renovated PECMH whose long term viability and array of services, whether perceived or real, wasn’t always set in stone over the past 20 years.

“This is the character of Prince Edward County coming through today,” Ferguson added, referencing previous remarks from Premier Ford that compared MPP Smith to a ‘dog with a bone’ when it came to PECMH. “The residents of Prince Edward County can be compared the same way and you’ve seen it this week in regards to a number of issues council has addressed in our community. This project is a reality of what the local residents understand to be of vital importance in this community.”