While there was typical braying somehow Sir John A. Macdonald will now be blotted from history textbooks and Wikipedia pages the world over thanks to the recommendation from the Macdonald working group, let’s get something straight.

Removing Holding Court from public display on Picton’s Main Street doesn’t erase Canada’s first Prime Minister’s time here in 1834 or his complicated legacy thereafter. Thankfully for millions of young Canadians, Macdonald’s complete history from Charlottetown to the clearing of the plains, from the railway to residential schools is and will continue to be taught in classrooms which is a far more fulsome account than what your humble scribe was ever offered way back when.

But what the statue’s eventual removal off Main Street does is start to cement this community’s history as empathetic to our neighbours and indicate we are better informed to the horrors and atrocities directed at indigenous peoples of this land committed in the name of building this country. In today’s Gazette, lead Macdonald Project organizer David Warrick wonders openly how this statue removal will encourage reconcilation.

Our position is that the removal will show to our neighbours this community is honestly earnest in healing an open wound where one party greatly took advantage of the other, benefitted and continues to benefit from that arrangement. Removal is a positive step on a what needs to be a long and painful journey in order to be healing to both sides.

HOSPITALS IN A HURRY Perhaps the most salient point lost in the whirlwind that was Friday’s visit by Premier Doug Ford, Health Minister Christine Elliot and MPP Todd Smith to announce $8.7 million to support the planning and design of the new Prince Edward County Memorial Hospital was the quickness in which the provincial government has advanced the project through Ministry of Health infrastructure bureaucracy.

Typically, Ford’s announcement might have been in 2021 or even later but thanks in part to Smith’s doggedness, the new PECMH project has been bumped to the head of the line. While it was when Smith was sitting in opposition the Ontario government started the ball rolling on a new PECMH, Friendly City Smitty has plucked that ball off the ground and started rumbling towards the goal line as fast as bureaucratically possible.

Looking back 10 or 15 years ago when it seemed at any moment a QHC boogeyman was going to drive down Highway 62, slap a pad lock on the front door of PECMH, toss a box of bandaids into the middle of the parking lot and give a hearty laugh as he wished the residents of Prince Edward County “Good Luck!”, it still feels surreal this day has come.

Now, more than ever, this community needs to match the province’s pace and make sure the community’s share of 10 per cent or $16.5 million is available and ready for when the first shovels hit the ground. If you haven’t already, call the Hospital Foundation today to find out how you can support the Back the Build campaign.

WATER SAFETY IS KEY TO VICTORY My good friend and former editor Chris Malette used to say it sucks when the other guy gets it right first but we’d have to nod our head and agree with our friends at the Times that there is no other way forward when it comes to opposing the Picton Terminals case for rezoning and expanding its operation at the Local Planning Appeal Tribunal than to hitch the collective hopes to the case that such an increase in activity would be catastrophic to Picton’s source water intake near the Picton Golf and Country Club and in the vicinity of the port itself.

Realistically, there can be no other arguments against the zoning that will (pardon the pun) hold water. The ability to derive safe drinkable water that’s not contaminated by mercury, lead, zinc et al thanks to ship draught disrupted sediment near the intake is the entire case.

All levels of government and regional authorities (Quinte Conservation, Ministry of Environment, etc.) must be on the same page and pulling in the same direction as this community in order to stand any chance at the upcoming LPAT hearing. 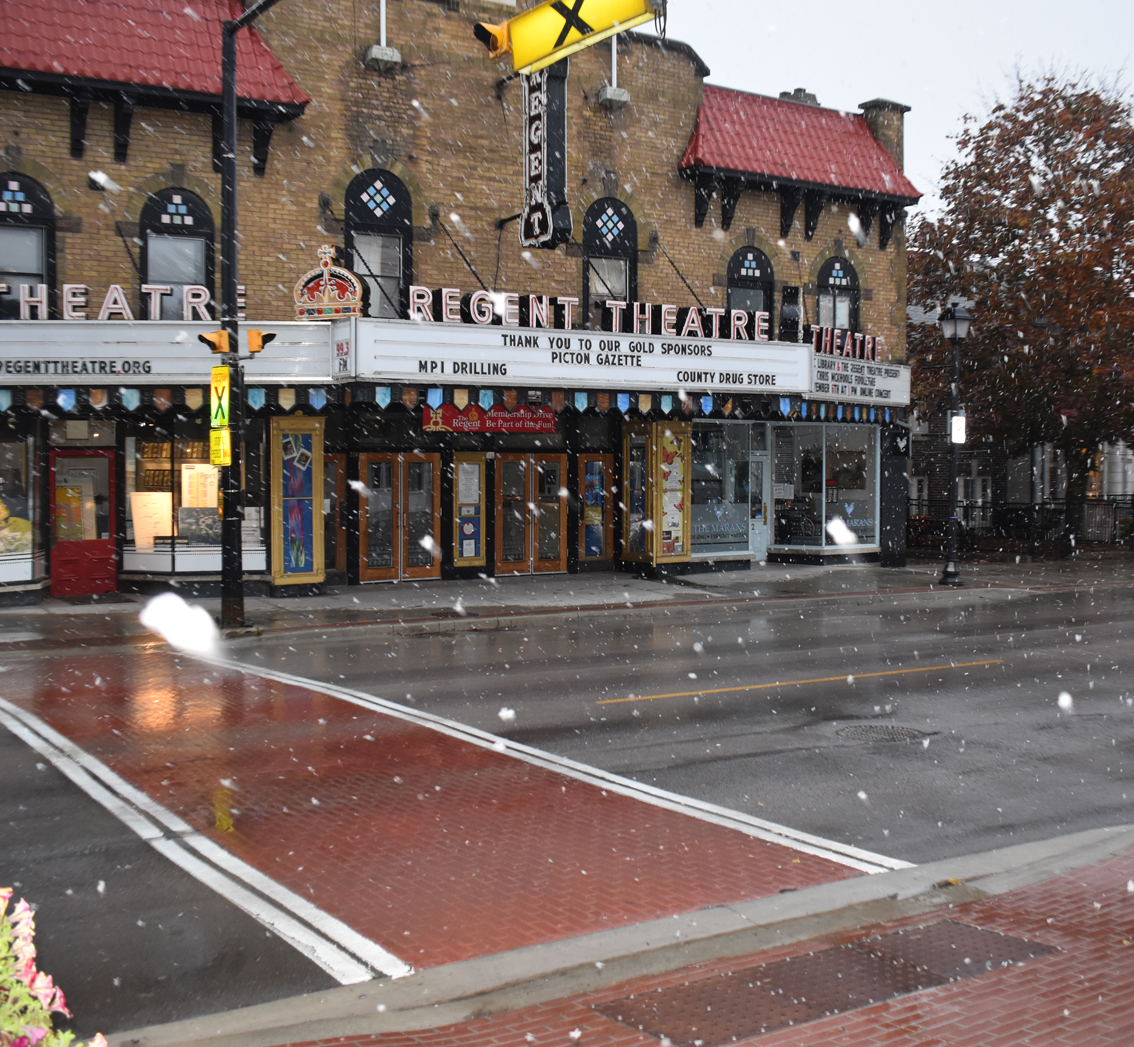 SINGING…IN THE SNOW? – Old man winter was barely tuning up his frosty lungs on a dark and dreary Tuesday afternoon when the skies opened up for the first snowfall of the 2020-21 season. While the wet snow was (mostly) melting just as fast as it was falling in town, the flurries were a reminder of what is sure to come as the days grow shorter. (Jason Parks/Gazette Staff)