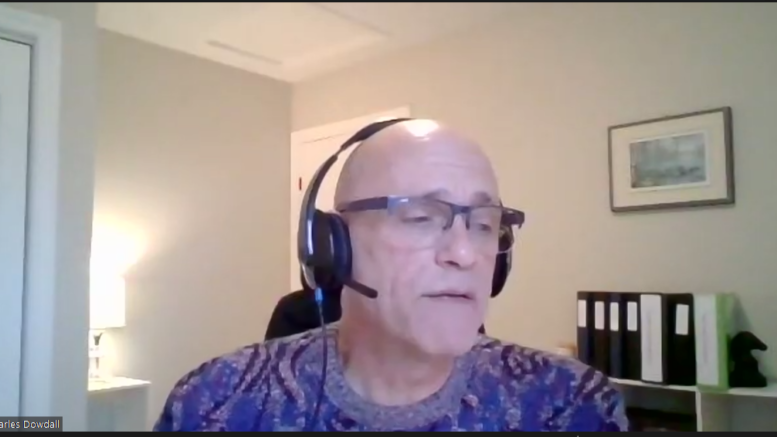 The guest speaker was introduced by Debbie MacDonald-Moynes, who sits on the Board of PEAHC.

“We spent the first many months as a board learning about the housing situation in Prince Edward County and about government programs and other approaches that could be taken to address this pressing issue,” she said. “It was earlier this year that we launched a search for the Executive Director.”

As MacDonald-Moynes pointed out, Dowdall was appointed to be Executive Director this past July. She also detailed Dowdall’s extensive experience in the non-profit sector that has armed him with expertise in the development and sustainability of affordable housing using a community-based approach.

She stated that, prior to entering the non-profit sector, Dowdall spent 20 years in the financial services industry as a commercial and corporate banker.

“He holds a Bachelor of Commerce (Hons) degree in finance and an MBA from Queen’s University,” she added. “Chuck is the past Treasurer of the Kingston Community Health Centre and is currently a Board Member of Willis College of Business & Technology and Teknowave Aboriginal Technology.”

Giving the Rotarians a bit of background on the PEAHC, Dowdall explained they are an independent, non-profit corporation that has operated since 2018 and whose sole shareholder is the municipality. Dowdall was careful to note that PEAHC operates independently from the County of Prince Edward.

“We do not represent or speak on behalf of the County,” he said.

He also stated that the 11 board members of PEAHC offer a wide range of expertise, from public relations, to public administration and affordable housing. The current president is Peter Landry, and the past president was Treat Hull.

Using the most recent statistics available-those collected in September 2020-Dowdall illustrated exactly why affordable housing is such an issue in the County.

“The real estate market has reached a whole new level as a result of the pandemic. Specifc to the County, house prices have increased 24 per cent over the last twelve months. Inventory of homes in the County is at an all time low and the average purchase price of a home now is $648,000,” explained Dowdall.

Accodring to the aforementioned statistics, approximately 90 per cent of those who purchase homes in the County are from the Metro Toronto Area.

“They’re relocating to the County because with the current pandemic and working virtually, as long as they have an internet connection, they can live and work anywhere they want,” said Dowdall. “This has been a double edged sword, because the lack of homes for purchase has put even further strain on the rental market, which was already at a critical level prior to the pandemic.

Using examples, Dowdall highlighted the average cost of homes for rent and just how unaffordable they are.

Unfortunately, as Dowdall made clear, the combination of high rent and the cost of utilities has pushed the local affordable housing crisis to a critical level. He noted that with an additional 15 per cent accounting for hydro, heat, water and tenant insurance, the average cost of a one bedroom apartment quickly balloons from $1,288 to $1,410.

Offering further clarity on the subject, Dowdall noted the term “affordable housing” is often used incorrectly. In fact, he stated, for a rental unit to be considered affordable, the rent charged must be at least 20 per cent below the average market rent for a comparable unit in the community. For example, for the $717 bachelor apartment to be affordable, the rent cannot exceed $564.

“Whether a rental or home ownership, there’s a second component to affordability, which is the total occupancy cost,” he added. “Your mortgage, rent, heat, hydro, taxes, insurance and water can’t exceed 30 per cent of the total gross, or pre-tax annual household income to be classified as affordable housing.”

Providing an example, Dowdall noted that should a family wish to relocate to a two bedroom, market value unit within the County, that family’s gross annual income must be at least $68, 530 for the unit to even be considered affordable.

After having isolated the issues at hand, Dowdall explained what the PEAHC is doing to help solve the affordable housing issue.

Currently, the corporation has three projects of note. After having sat dormant for the past decade, they are in the process of acquiring the property that is the former Wellington Arena. PEAHC is also involved in a P3 partnership looking to boost affordable housing and in the possibility of a tiny village community here in the County.

“The last 90 days we have been moving forward at lightning speed,” said Dowdall.

With regards to the arena property, PEAHC intends to do their due diligence on the property and have that completed by January 31, 2020. Dowdall noted they have already completed a feasibility study and

a civil engineering study and are currently in the process of completing an environmental assessment phase one and two.

“The objective and decision yet to be made is whether we use the existing structure or demolish it based on initial indications,” he said. “Regardless, the objective is we would proceed with developing 30-35 affordable rental housing units with a rent of at least 20 per cent below the market rate.

Dowdall was adamant that the combination of one and two bedroom apartments would remain 100 per cent affordable.

The construction is intended to take place in 2021 with occupancy in 2022.

“The second project is we are in middle of is what is known as a P3 partnership. A national private sector corporation approached our organization and expressed an interest in the development of affordable housing in here,” explained Dowdall. “They are very committed to the development of affordable housing in the communities they serve, especially in rural Ontario.”

Currently, they are in negotiations for an additional 20 affordable rental housing units, also with a mixture of one and two bedroom apartments.

“Our objective is true affordability- that every unit meets that litmus test of 20 per cent and not exceeding 30 per cent of your gross annual income,” he expressed.

With the federal announcement of the Rapid Housing Initiative (RHI)-a stimulus package that will invest one billion dollars into affordable housing- Dowdall noted the timeline for construction of these projects could be full speed ahead.

“The objective is the development must be completed within 12 months of the approval being given by Canada Mortgage and Housing Corporation (CMHC),” he stated. “Applications are due by December 31 and we’re pulling out all stops to have applications on file for that date. Approvals will be made by February 2021.”

Should their applications be approved, PEAHC’s two projects could be completed and have occupancy available by February 2022, if not sooner.

“They are making sweeping revisions to the Ontario Building Code to be in place for early 2021 that removes current barriers preventing the development of tiny home communities at the local level,” he stated.

Between these projects, excluding tiny home communities, PEAHC is hoping to add upwards of 100 affordable housing units to the County within the next 15-18 months.