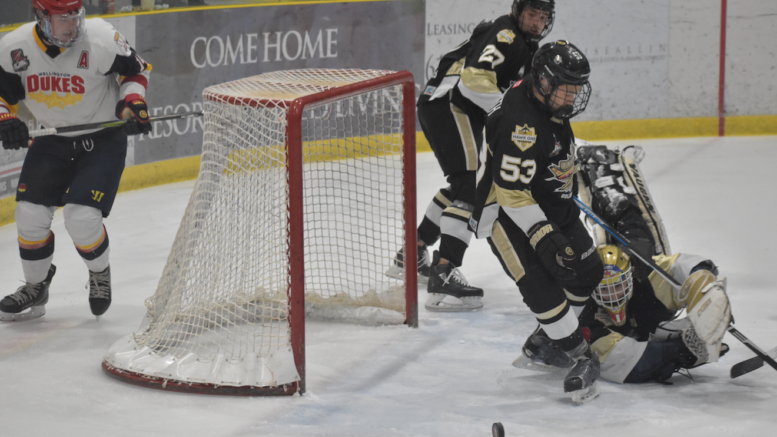 Junior A hockey has come back to the Quinte area.

While the Wellington Dukes and the Trenton Golden Hawks can’t thrill their fans in person, the local organizations are facing off over the coming days in a ‘Summit Series’ for a newly created price, the Hasty P’s Cup.

Although the doors of the arenas will be closed, every minute of the series can be seen on YourTV Belleville (Channel 4/700) and HockeyTV.

“With the support of the County of Prince Edward, the City of Quinte West and the Hasting Prince Edward Health Unit, the OJHL is excited to have two great franchises getting our players back on the ice”, said OJHL Commissioner, Marty Savoy.  “It is an exciting day for fans across the OJHL and the great fans in Prince Edward County and the City of Quinte West.  The staff of the Golden Hawks and Dukes have been leaders and very instrumental in the development of the OJHL Return to the Rink plan and the implementation of protocols to ensure the safety of all of our participants and support staff.” 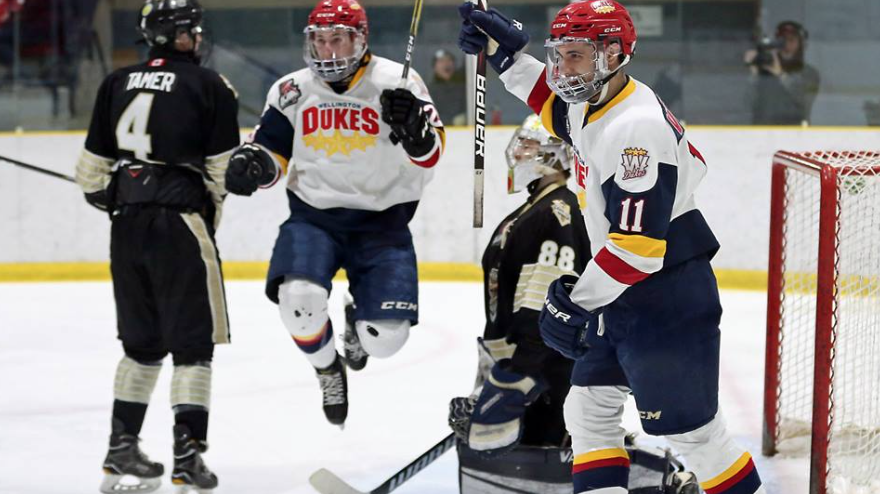 JUMP FOR JOY- Wellington Dukes Ben Woodhouse and Frank Vitucci celebrate the former’s goal which stood up as a game winning tally in a 4-2 win over the visiting Trenton Golden Hawks in 2020. (Photo by Ed McPherson / OJHL Images)

Since March, OJHL team and league staff have worked together to develop a detailed Return to the Rink plan with the safety of the over 400 Jr. A players and staff at the forefront of the process.

“This is a great rivalry between two OJHL franchises and it is exciting to see our athletes back on the ice doing what they love to do, under strict and safe COVID-19 protocols, added OJHL Chair Mark Mercier.

The starry sniper parlayed his time in Wellington into a 2006 draft selection by the Chicago Blackhawks and recently retired after a nine season pro career.

“The last few months have been tough,” said the new business owner. “The process for a return to hockey, and normal life has been difficult.  As a former Wellington Duke, I know all too well the great rivalry with Trenton, and Trent Valley Distributors is proud to be the presenting sponsor. To celebrate the legacy of the Hasty P’s is also a wonderful addition.”

YourTv Belleville has been a regular fixture in the Dukedome for the past four season, bringing hockey fans in Quinte Wellington Dukes action and programmers are thrilled to be back and broadcasting OJHL action.

“We are thrilled to be able to give hockey fans great hockey from the comfort of their own home.  It is the responsible way to keep the community safe, while showcasing the Battle of Quinte.  YourTV will have wall-to-wall coverage of every game, and we cannot wait to get started,” added Dave Feeley,  Manager of Programming and Community Relations for YourTV Belleville.

Hockey fans in Wellington and Trenton were denied what might have been one of the most thrilling and high stakes Battle of Loyalist Parkway in history when the COVID-19 pandemic washed out the 2020 Buckland Cup playoffs just as the ‘Forever Rivals’ were set to face off.

While there can only be dreams of what could have been, the organizations are excited to partner in this endeavour to provide a fix of the fanbases and get the players on the ice.

“At the end of the day, we have a great partnership with Trenton, our division and our league.  Great people are working together to promote our players, while trying to keep them safe,” Dukes General Manager Todd Reid said. “ We must thank both ownership’s and everybody involved.  The players are getting better every day, but the game situations are crucial for their development and mental health.  YourTV Belleville is vital to broadcast these games and foster the promotion for NCAA Division I and II as well as the CIS.  It is important to these players and there is a lot on the line.  We cannot thank the HPE Health Unit, both municipalities, the OJHL and OHA for their leadership in making this a reality.”

Trenton Golden Hawks Coach/GM Peter Goulet added “This means everything to these guys. They are looking to move on to play CIS, NCAA, pro hockey and even the NHL.  Without competitive games, it is not possible.  It is an honour to play Wellington in this Summit Series, and it will be good for our players to have something to play for.  We thank the OJHL, the OHA, the City of Quinte West, the County of Prince Edward, health officials and the Dukes for helping to create this bubble.”

Team staff and players are being guided by both municipalities, HPE Public Health, provincial, and federal health guidelines.  All players, staff and officials will have double COVID-19 screening before entering the arena for every single game, first two hours prior to entering and the second upon arrival.

In addition, both teams have been provided a PPE package that includes items such as signage for areas in the rink such as team warm up areas, hand washing and wearing of face mask reminders. The OJHL and OHF’s Return to Play policies will be strictly adhered to in order to keep players and staff safe.

For more information on this celebrated regiment, visit  https://www.youtube.com/watch?v=jxhedqEAacM

The schedule for the series is below.