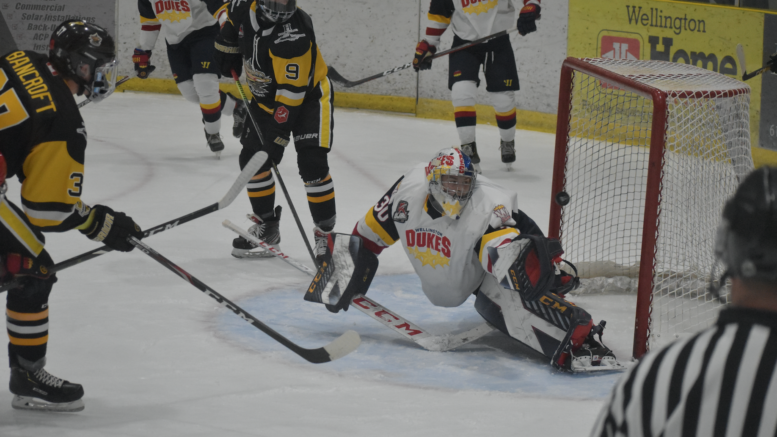 After two games, there’s not much to pick between the Wellington Dukes and the Trenton Golden Hawks after successive ties to open the 2020 Hasty P’s Cup Summit Series presented by Trent Valley Distributing.

The formula for both contests were patterned as the host Dukes would go up early in the game only to watch the Golden Hawks chip away and square the affair late.

The series is being played under COVID-19 protocols approved by the Ontario Hockey Federation, the Ontario Hockey Association and Hastings Prince Edward Public Health and those rules include no contact and five minute major penalties for some close contact infractions.

As was the case in Game 1, Wellington was quick to the draw on Friday afternoon in Game 2 and drew first blood. Some nice forechecking by James White would cause a turnover in the Trenton zone.

White would find Evan Miller and the half wall who wound up passing to Ben Woodhouse in the slot and the Wellington vet would best Golden Hawks net minder Oliver Troop with a backhand at 5:10.

It wound up being a short debut forDaniel Bothelo in the Wellington net at the Nottawa, ON native caught a puck in the shoulder while making a diving save and was lifted for 16-year-old Kingstonian Ethan Morrow just over five minutes into the game. 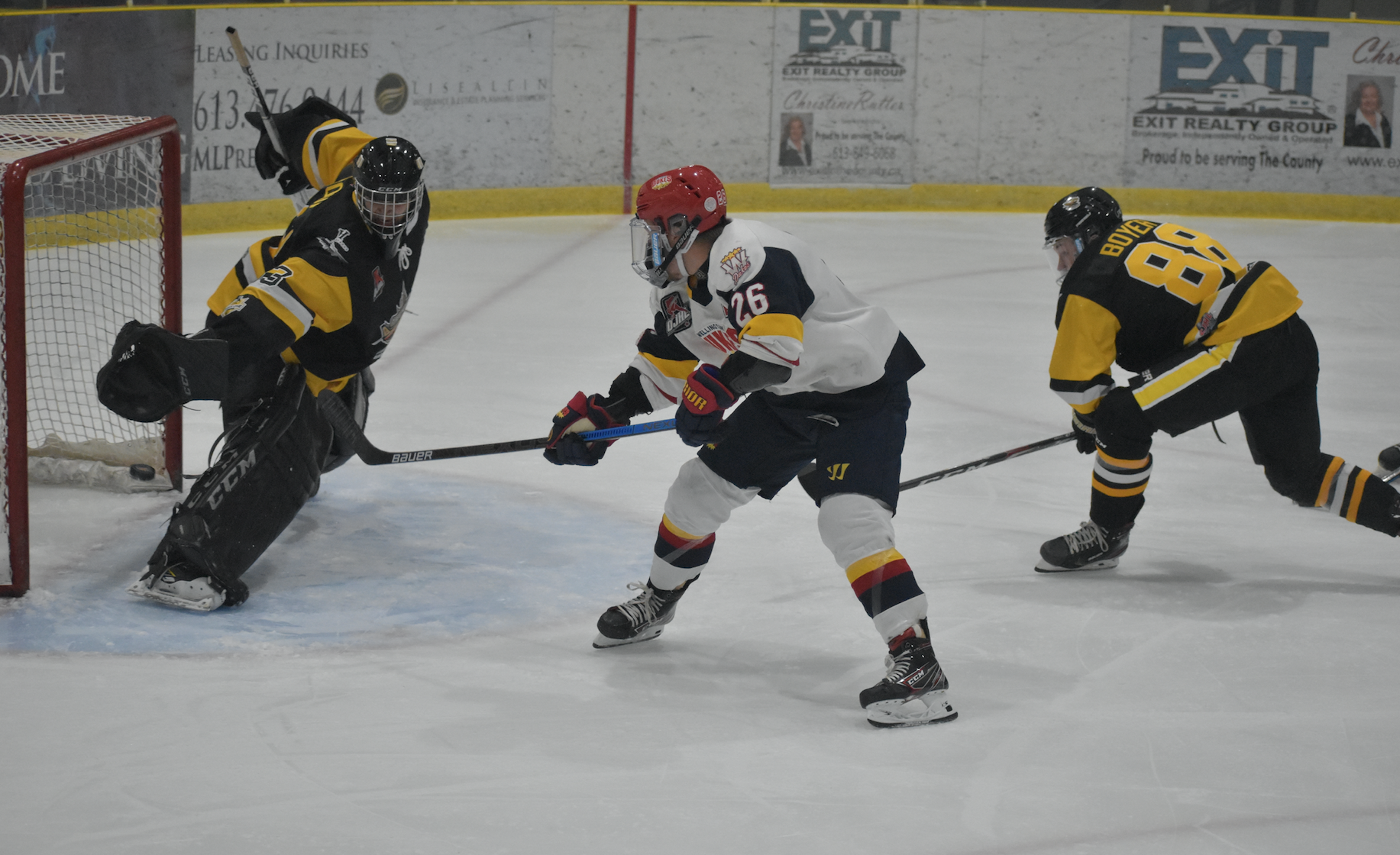 The Dukes extended that lead just under five minutes later when Tyler McBay’s point shot was kicked out by Troop and went right to White who had been spilled beside the Trenton goal but recovered in time to knife a backhand home at 9:23.

After Trenton had appeared to cut the Wellington lead in half on a shot that caught some portion of iron at the Dukes goal but was washed out but the officiating crew, Wellington would march up the ice and go up three goals off a pretty pass at the Trenton net.

Once again White would start the play off a forecheck and spot Woodhouse who shuffled the puck to Miller.

Miller’s feed to the crease would find White and the one timer from five feet out beat Troop at 13:35.

Up 3-0 despite being outshot, the Dukes were unable to escape the opening period clean as Sam D’Amico’s shot from the blue line went through a see of legs and past Morrow with 59 seconds left in the stanza to make it a two goal hockey game.

The Golden Hawks would get to within a goal at 8:16 of the second off an odd man rush as former Duke Dalton Bancroft made a nice feed to Griffen Fox who went top bunk behind Morrow.

With just one dwfeceman back for Wellington, Morrow was mostly left to his own devices and made a couple of nice saves of odd man situations but Golden Hawk Jacob Campbell finally deposited the puck past a prone Wellington goalie at 16:36 to make it 3-3.

Morrow would come up big for Wellington in the third making ten saves including a clutch stop in the waning moments of the period as a Trenton power play-the only one of the game- came to a close. 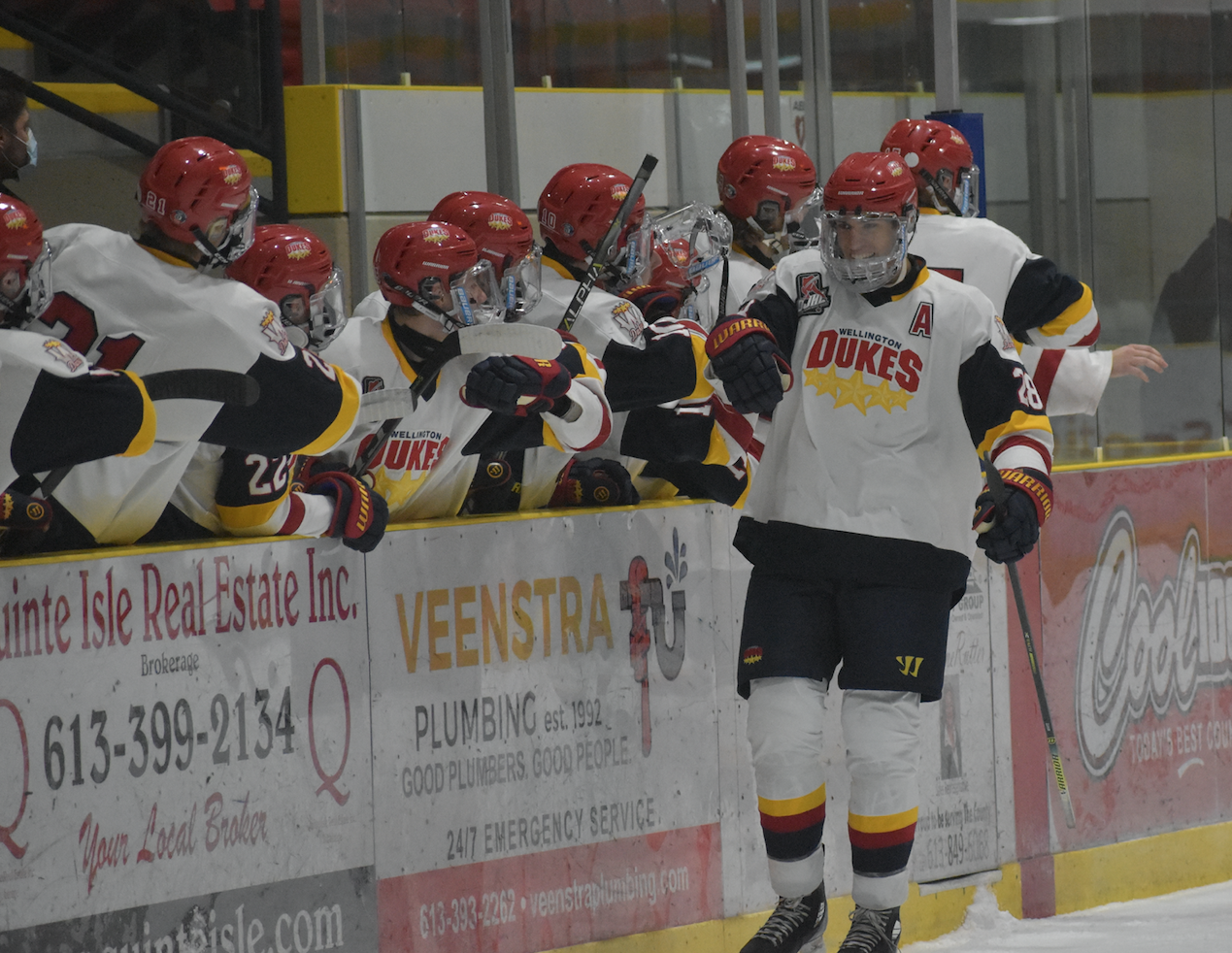 Morrow wound making 40 saves after coming on for Botelho early in the contest.

“Ethan Morrow played well coming in cold like that and kept us in the game down the stretch,” Dukes Head Coach Derek Smith said. “He gave us confidence and that is all you can ask in a situation like that.”
Morrow, who is one of three 16-year-old rookies with Wellington said coming off the bench into the fire is mentally tasking.

“When you come in off the bench, you have to put aside anything, and focus on shutting the door,” he added.

On Wednesday, Wellington again would shoot out to a multi goal lead only to watch the visitors come back and tie the game.

Jacob Vreugdenhil kicked off the series with perhaps one of the prettiest non-OJHL Regular season goals ever scored in the Dukedome.

Killing a penalty, the Belleville, ON native streaked full stride to a loose puck at centre ice, split the Trenton defence including a toe drag betwixt the wickets of Kyle Robinson unmolested and tucked a puck past Trenton Golden Hawks starter Nic McGowan with just over six minutes left in the first.

With under a minute left in the first, White would drive along the Trenton goal line, picking up his own rebound and putting a tap in past McGowan with 43 seconds left to make it a 2-0 Dukes lead at intermission.

Wellington starter Eli Shiller was spotless in his debut on Lehigh arena ice until late in the second when Campbell picked up a loose puck behind the Dukes net on converted on a wrap around at 17:46.

Midway through the third, Trenton would crawl back to even as Jake LaVille was able to grab the puck off the Dukes half wall on a chip and chase play and then spot a streaking Aaron Jamieson at the Wellington crease at 9:13.

Tied at 2-2, Woodhouse had the game on his stick later in the stanza and only had a fallen McGowan to beat but couldn’t convert on a gaping Trenton cage.

One Duke that’s enjoyed the modified rules is the hulking James White. The Peterborough native has shown off soft hands both at the net and in transition, scoring three goals.

“With no hitting it gives you a chance to gallop,” White said after Game 2. “It feels at times that someone should be checking you, however with the rules we are playing under, it gives you extra space.”

The setting for the Bay of Quinte Summit Series presented by Trent Valley Distributors will shift to the Duncan MacDonald Memorial Gardens this week for Games 3 and 4 starting on Tuesday at 1:30 p.m.

The games are available to watch on YourTv Belleville, online at HockeyTV and on radio via County FM 99.3 with Craig Foster.