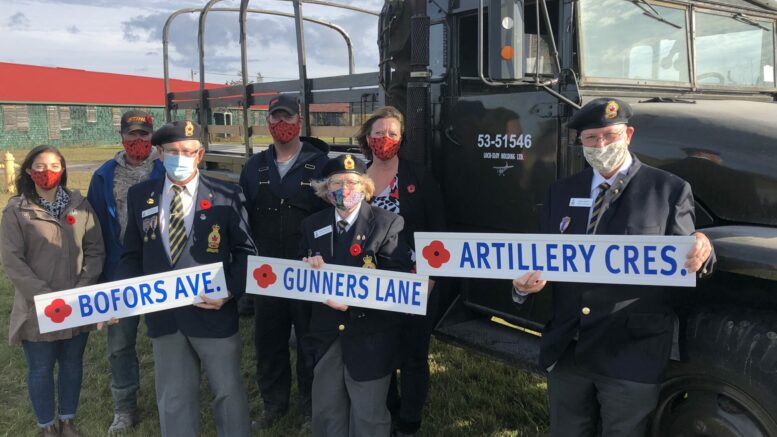 A return to the names that once graced the roadways at Camp Picton in the 1950’s are in order thanks to a recently discovered blueprint and the leadership of Loch Sloy Business Park.

Members of the Royal Canadian Legion Branch 78 Picton joined with the Loch Sloy team on Wednesday afternoon after shortened yet still poignant Remembrance Day ceremonies had been held at the Picton Cenotaph earlier in the day.

Blueprints from 1954 when the Royal Canadian School of Artillery (Anti-Aircraft) set up at the former British Commonwealth Air Training Plan base that was vacated by their Royal Canadian Air Force post WWII were recently discovered to include roadway names.

The monikers include important names, units and devices in Canadian Military history including Bofors Ave. (named after the Bofors 40 mm Anti-Aircraft gun),  Gunners Lane (named after the Royal Regiment of Canadian Artillery branch of the Canadian Army) and Dieppe road.

To enhance the connection between the historical use of Camp Picton and its usage today, Loch Sloy contracted with local signage expert Dan Ferguson to create road signs with a poppy adorned on them.

“We actually weren’t aware of these historical names but we were able map them out with help from the blue print and each one has a historical military significance mainly from World War II and battles the artillery fought there,” Loch Sloy’s Jacqui Burley told the Gazette. “We thought this was a great way to tie in the past, the present and the future by having these historic names returned and by having a poppy on the signs as part of remembrance and supporting the Royal Canadian Legion.”

While the base was erected at a short term project in 1941 to train members of the Commonwealth’s Air Force recruits, Camp Picton has stood the ravages of time and is one of the last operational BCATP bases in the world.

Burley noted some Canadian Army special forces training takes place at Loch Sloy and that Picton Airport is home to the Central Region Gliding School for Ontario’s Air Cadets so military history is still being made there.

“It’s just a way for the Loch Sloy team to show our appreciation for everything veterans have done and will continue to do to protect our freedoms,” she added.

Branch 78 President Diane Kennedy said the group values Loch Sloy’s commitment to honour veterans who trained at No. 31 Bombing and Gunnery school and later Camp Picton and noted Burley maintains a museum of military artifacts for those that may pay a visit.

“When we closed the former Legion building, Jacqui took on anything that had to do with the activities that took place here, uniforms and important artifacts, etc to display and Loch Sloy also provides us with free storage here so it’s a wonderful partnership the Branch has with them,” Kennedy told the Gazette.

On average, as many as 20 families and veterans pay a visit to Camp Picton annually to see what’s become of the town and base where they or their loved one was stationed during World War II, Korea or the Cold War.

Burley recalled being contacted by a gentleman from England who was cleaning up his late father’s house and came across numerous photos from the time when his dad was training in Picton. Service during the second world war was something that was never discussed between father and son.

“He was really intrigued with the base and the history and he and his wife came over with their photo album and the man had his picture taken in each of the spots where his dad stood,” Burley recalled. “We also got him up in a plane and flew the same flight path his dad would have flown while training here.”

“It’s always important to us to reinforce and remember that history that so many veterans share of this place,” she added.