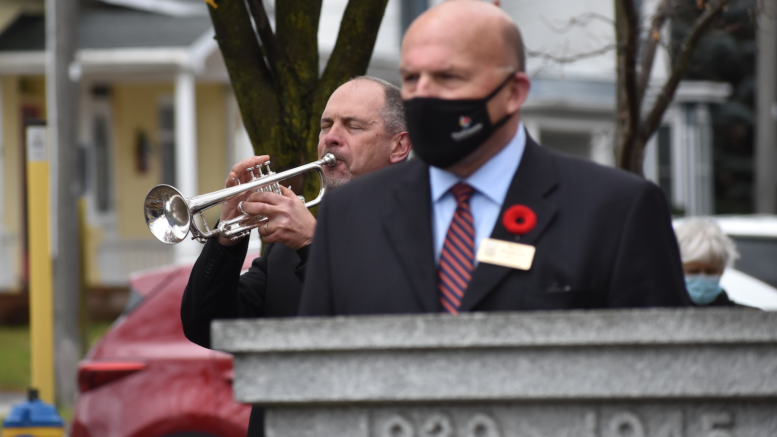 Despite the globe dealing with the greatest public health pandemic since it was first marked as Armistice Day in 1918, the chain of remembrance in Prince Edward County remains unbroken.

Masked members of the Royal Canadian Legion colour party gathered at Picton’s Cenotaph on Wednesday along with no less than 100 members of the public to honour those who fought and made sacrifices -and for some, the ultimate sacrifice- for freedom.

The impromptu gathering which wasn’t so informal included the playing of Taps and the Last Post by trumpeter Kevin Gannon, Amazing Grace bagpiper and short addresses by County of Prince Edward Mayor Steve Ferguson and Padre Phil Hobbs who also recited the Legion poem. 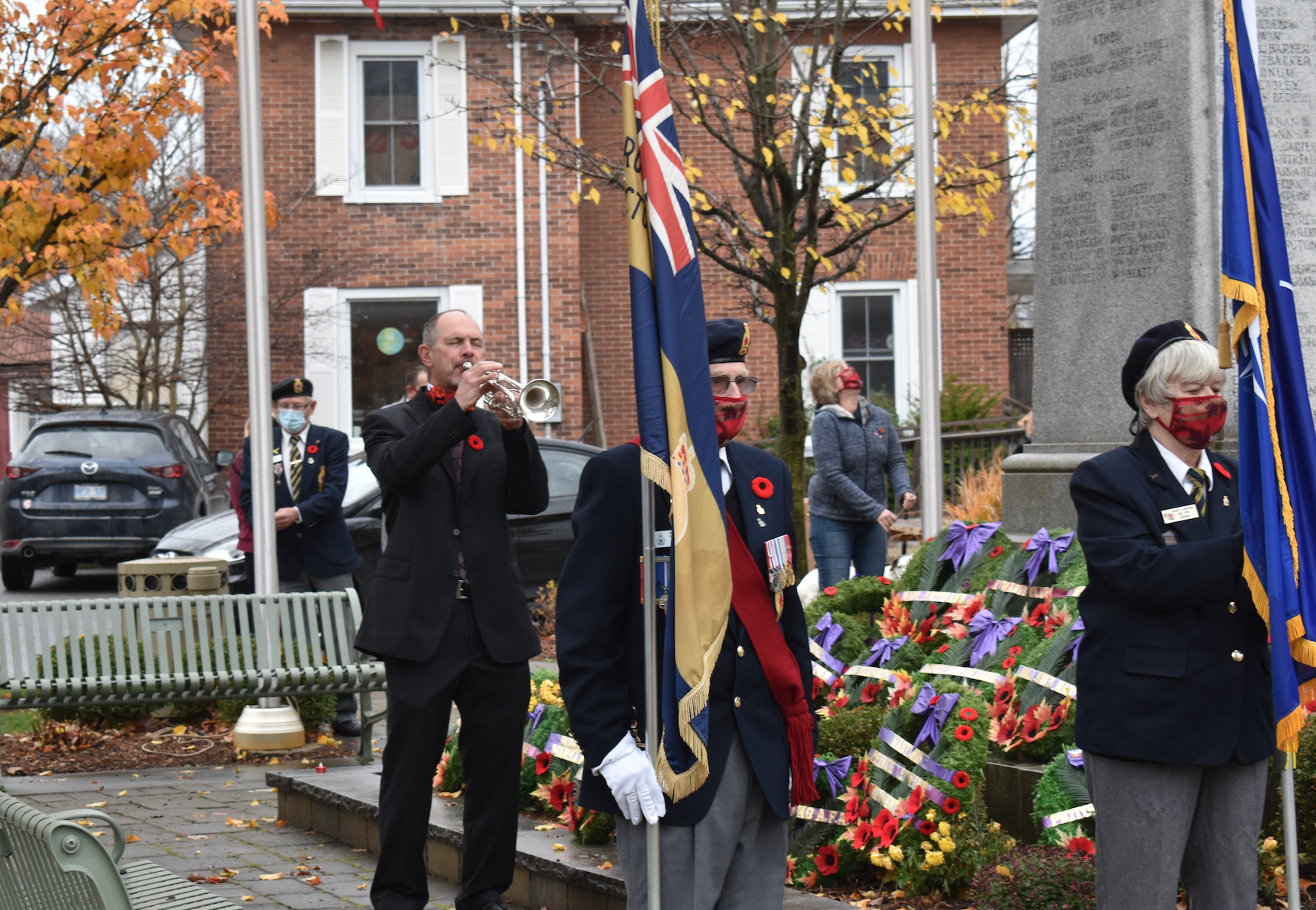 (Background) Members of the Legion lower flags to half mast during the playing of Reveille. (Jason Parks/Gazette Staff)

While the poignant service at Picton United, the solemn laying of wreaths, the pomp and circumstance of the traditional march past and the fellowship and camradriere of gathering post service were only memories of Remembrance Days prior, members of the community still felt the need to gather on Main Street at 11 a.m. in a socially distanced and safe manor and honour the service of all County men and women who have answered the call of our country in war time and peace time.

Royal Canadian Legion Branch 78 had encouraged members of the public to lay wreaths in their own time on Remembrance Day and asked for staggered visits.

Branch 78 President Diane Kennedy stressed that it was of great importance that both COVID-19 protocols be met but also that there was some kind of short but solemn ceremony that involved the familiar sounds of the bugle and lowering of the flags as well as a prayer for those that served and died in conflict.

“The main thing was that we wanted to keep the community safe and we I think we did that with our ceremony and the tradition of Remembrance continued and that’s so important,” Kennedy said. “It wasn’t like normal times but as far as the Poppy drive has gone, the community has really supported that part of campaign. People have shown up at the Legion and given us money, knowing that we couldn’t have tag days and Air Cadets stationed with poppies out side of stores. In terms of the small number of boxes we had inside stores, we’ve raised more money this year than ever before and we are so grateful to this community for all its support.”

Since moving to the Elks Hall from its original home on Main St., Kennedy mentioned Branch 78 has been in better shape with withstand the COVID-19 Pandemic but mentioned the closures and gathering regulations have severely hobbled other branches across Canada and the President wanted to remind readers that other branches including those in Wellington and Consecon will need extra support moving forward out of the shadows of the pandemic.

“The fact people remembered on Nov. 11 is so important and we don’t want the public to forget what we do for Veterans and the public through the Poppy Campaign funds,” Kennedy added.

While Branch 78 helps retired Canadian Forces members and their families with all sorts of needs, the group also sponsors and donates collected funds to projects that will improve the lives of all County residents including the Hospital, Hospice, Air Cadets and other youth organizations, healthy lunch programs, etc.

“Without your service clubs, a lot of things would fall through the cracks so its vitally important that the Legion supports our community as well as they support us on Remembrance Day,” Kennedy added.