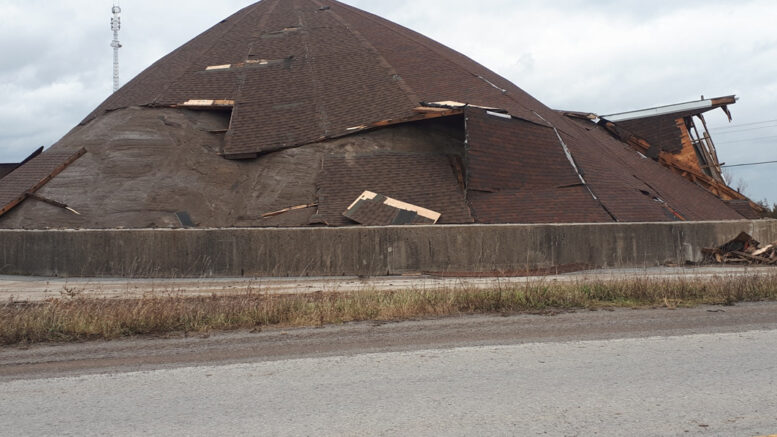 A MIGHTY WIND A devastated salt dome sits on County Rd. 2 near Salem Rd. on Monday. The structure fell victim to heavy winds on Sunday evening that battered the Quinte area, causing property and roof damage and power outages but little by way of personal injuries. (Gazette photo by John Ferguson)

Local weather monitors showed gusts near Picton that were upwards of 95 km/h hour and much more sustained and heavier near the shore.

ANY PORT IN A STORMY’S A picture from Picton’s Ryan Cole shows a pair of Prince Edward OPP officers trying to remove a soft sided car port at the Stormy’s car lot. (Photo by Ryan Cole)

One wind measuring device at Presqu’ile Point registered a gust of 125 km/h around 4:30 p.m. on Sunday afternoon.

The heavy and sustained windspeeds lead to lengthy power outages in Consecon and South Marysburgh and electricity in some remote areas wasn’t reestablished until Monday afternoon.

In Picton, resident Ryan Cole was at the west end of town when an unsecured, soft sided car port came ripping from the west and nearly damaged a number of cars at Stormy’s on Highway 33. Cole managed to corral the runway shelter and tie it down until Prince Edward OPP and Prince Edward County Fire Rescue were able to attend the scene and secure the temporary shelter.

“It was seconds away from blowing across the lot,” Cole told the Gazette.

While automobiles in Picton were spared in Sunday’s big blow, the same cannot be said for the municipality’s salt and sand dome situated along County Rd. 2 near the village of Ameliasburgh.

The dome, a longstanding man made land mark for providing directions to lost motorists as well as a staging area for winter driving maintenence, was in the process of being dismantled as of Tuesday. County of Prince Edward Communications and Media Coordinator Mark Kerr confirmed the County is in the process of taking away the structure, which is damaged beyond repair and that tarps will be installed over the pile of salt/sand mixture in order to protect the material from the elements in the short term.

“The municipality is exploring ways to replace the structure as quickly as possible,” Kerr said. “We don’t have an estimate at this time what the cost will be to install a new structure. We are also putting contingency plans in place to ensure we will continue to provide the same level of winter control for that area of the County.”

Kerr also confirmed the wind damage to the structure is covered under the Municipality’s insurance policy.