Keith Shannon’s submission (Newcomers offended by statue should move, Picton Gazette Letters to the Editor Page 9, Nov. 12/20) last week certainly provided a measure of ongoing fodder in the whole ‘us vs them’ debate that, despite prodding from this corner and others, sadly prevails in Prince Edward County.

This scrivener is not about to dive deep into the reasoning behind running Mr. Shannon’s missive but we will say that on a binary level, the letter, while divisive and myopic, needed the light of day.

That’s because this widely held notion the number of generations you have in the graveyard somehow provides greater status on matters and that opinions of folks who don’t have the same settler’s lineage should be dismissed by order of arrival is childish and keeping this community for growing and evolving together, forward as one.

In more generals terms, dear reader, this also serves as a reminder being published in the Letters to the Editor section is not a wholesale endorsement of your opinion from the person editing this newspaper. That page serves as an open forum for ideas, positions and commentary from all sides and angles. It’s not a homogenous think alike run under the thumb of the person managing Canada’s oldest community newspaper that particular week.

EMBRACING THE SHAME More in depth coverage will have bound to reach your eyes online at www.pictongazette.ca by the time this space is held in your hands but the flash in the newsroom late Tuesday night was official-Prince Edward County council chose to leave Holding Court stationed on Picton’s Main Street.

There will be plenty of verbiage directed towards this decision in the coming weeks as to how Council betrayed the Macdonald working group in the process and even questioning as to why anyone in this community would ever want to get involved in citizen groups, committees etc. during what’s left of this term of council.

But in terms of an opening salvo, this corner has argued Holding Court and Macdonald has no place on Main Street in a number of ways-trying to touch on the empathy vein of neighbouring Indigenous and other visiting BIPOC people having to view the creation of Macdonald in a prominent place in Picton.

Your humble scribe has also wondred openly about the significance of Macdonald’s brief time in Prince Edward County and if that was statue worthy when compared to other community builders either directly identifiable or as a group.

We’ve written about the need to protect Ruth Abernathy’s bronze creation from further vandalism that will almost surely come.

But maybe Kingston-area author Rick Revelle has it right on Page 9 (https://www.pictongazette.ca/2020/11/19/keep-macdonald-on-main-st-as-a-reminder/).

Perhaps the more difficult answer is keep Macdonald right where he is. The easiest thing in the world would be to hide him from the eyes of people pulling through Prince Edward County and hope everyone forgets how we as a community fell face first and headlong into the trap of glorifying Canada’s First Prime Minister/Preeminent Colonizer in 2015.

The more narrow and difficult path for this community is to wear this stain right on our face. Somehow try to defend the indefensible decision to hold him up in the middle of Picton as future generations of Canadians consume more accurate and fulsome history of what Macdonald said and, more importantly did, to Indigenous peoples and other minorities during the building of Canada.

Knowing everything Macdonald did- the good and now the evil- and having a constant reminder cast in bronze around which we must live and work in the shadows of that shame. 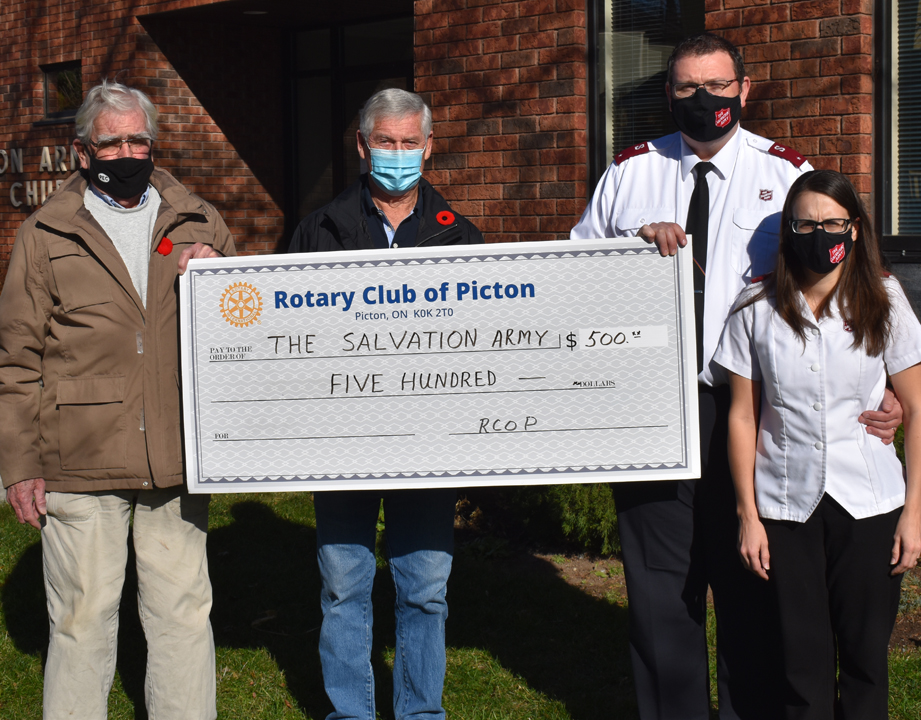 SALVATION SUPPORT – The Rotary Club of Picton typically sponsors the Picton Salvation Army Community Church’s Fishes and Loaves meal during the Christmas season however due to the COVID-19 pandemic, no gathering is possible in 2020. On Wednesday, the club donated $500 (the amount the meal costs) to the Salvation Army’s Christmas campaign. (Jason Parks/Gazette Staff)