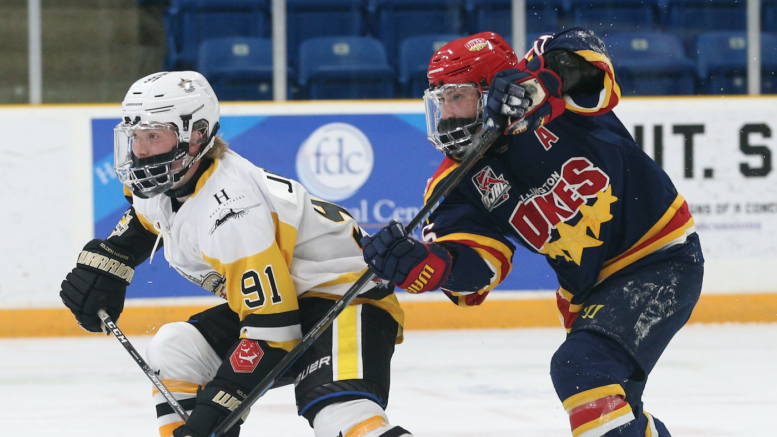 But the locals really seem to enjoy the cozy confines of the Duncan MacDonald Memorial Gardens in Trenton.

After tying Games 1 and 2 of the eight game Summit Series that pits the Bay of Quinte arch rival Jr. A hockey clubs against one another, the Dukes made their way into the Trenton last week and scored decisive, three goal victories over their opponents in Games 3 and 4.

On Tuesday, Wellington power forward James White continued his hot play, scoring a pair including the eventual game winner in a 4-1 win, the first of the series.

The following day, White and Wellington were at it again in a wild one. White would score once and added two helpers in a 6-3 Dukes win where starter Eli Shiller gave up three goals in a little over four minutes part way through the first to give the Golden Hawks a rare lead in the series but shut the door the rest of the way, making 41 saves over the final 40 minutes of the contest.

To close out the week’s action on Friday back and Lehigh Arena, what else but a tied game would the teams battle to? 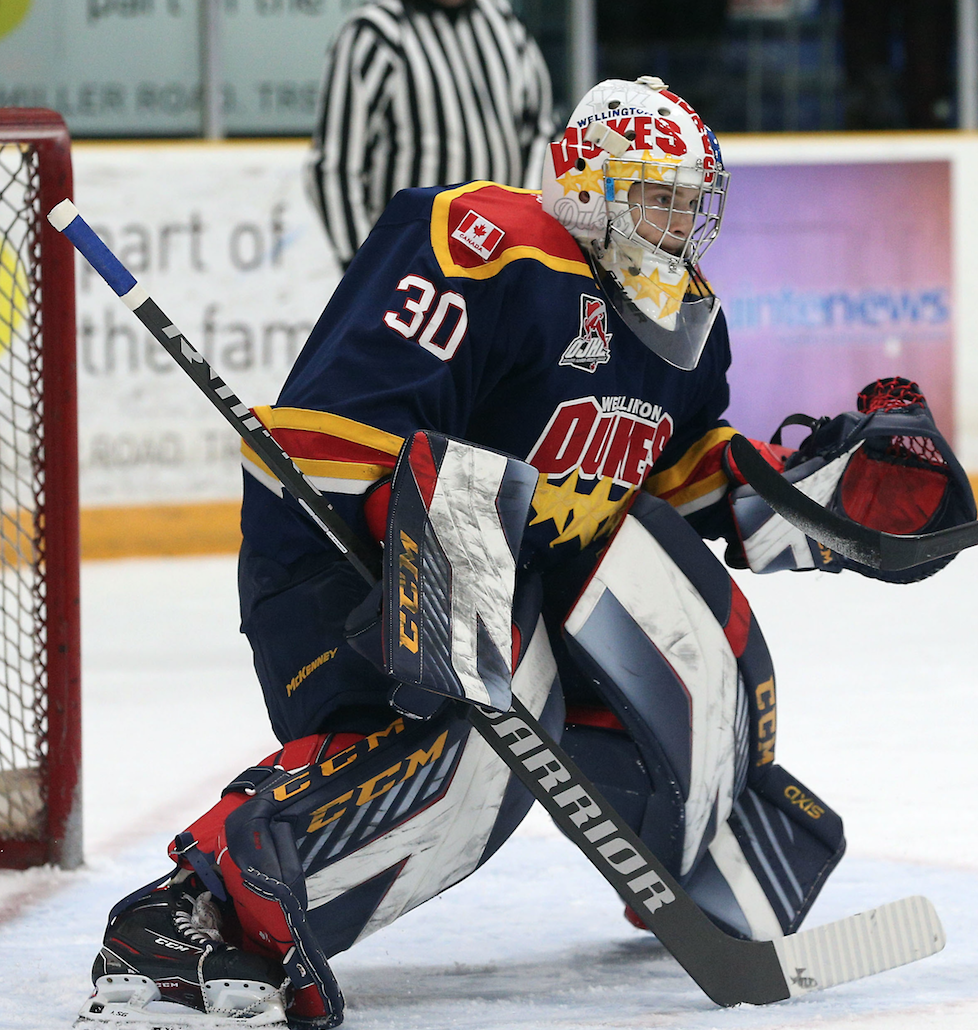 The Golden Hawks and the Dukes cranked up the offence and scored a dozen goals between them, settling for a 6-6 draw.

Down 5-3 going into the third period, the Dukes battled their first test of adversity and a pair from Barret Joynt got the contest back to even.

The Dukes would pull ahead for the first time since the first period with a Ben Woodhouse power play marker at 11:44 but Jacob Campbell beat Shiller with just under five minutes to go to square the affair at six goals apiece.

Wellington Dukes bench boss Derek Smith said that while falling back by a pair of goals is never part of the game plan, he was proud that his charges came roaring back with an answer for Trenton in the third period of Game 5.

“Momentum has been everything in the series.  I am sure both teams and their coaching staff were pulling their hair out at times,” Smith said. “We showed a lot of resiliency coming back in the third.  The guys stayed positive.  It is a good testament to our players to be able to come out of the game with a tie.”

With the tie, Wellington moved ahead of Trenton on points 7-3 and find themselves in a Hasty P’s Cup clinching position as of Game 6 on Wednesday when the two teams meet in Qunite West. Should the teams be tied in points after Game 8, for the first time in the series there will be sudden death overtime.

As has been the formula for Wellington throughout almost the entirety of the series, the Dukes would get ahead by more than one goal in the first period.

Former Golden Hawk Tyler Ignazzitto would fire a power play marker past Nic McGowan at 13:49 of the first, collaring the puck off a blocked Ben Addison shot and beating the Trenton goalie to the near post.

With just three seconds left in the frame, White would have the easiest tap in of his junior career, lurking at the lip of the crease and slipping a bounding rebound past McGowan for a 2-0 lead.

The Golden Hawks would have the only goal in the second as Evan Jamieson would black a Wellington defender’s point shot and streak alone towards starter Ethan Morrow.

The Dukes netminder seemed to have the breakaway handled but the wobbling puck slowly snaked its way through the goaltending paraphernalia and over the Wellington line for a Golden Hawk goal.

Morrow was quick to preserve the one goal lead in the dying seconds as the 16-year-old was forced to make a ten bell save in the last seconds of the stanza.

Up 2-1 into the third, Wellington got some much needed insurance when Cole McGuire’s quick shot from a tough angle caught mesh behind McGowan at 8:11.

White’s lightning quick release was on display later in the frame as he took the puck from his own end and into the Trenton zone before ripping a wrist shot over the shoulder of McGowan with lest than five minutes left in the game. Morrow turned in a massive effort for Wellington if the shots on goal are to be believed, making 58 saves for the Dukes

What else but a 2-0 Wellington lead?

Evan Miller would be the beneficiary of a nice Copper Matthews rush at 2:48 as the rookie found the veteran sniper in a nice shooting position and Miller beat former OHLer Joe Ranger for an early lead. 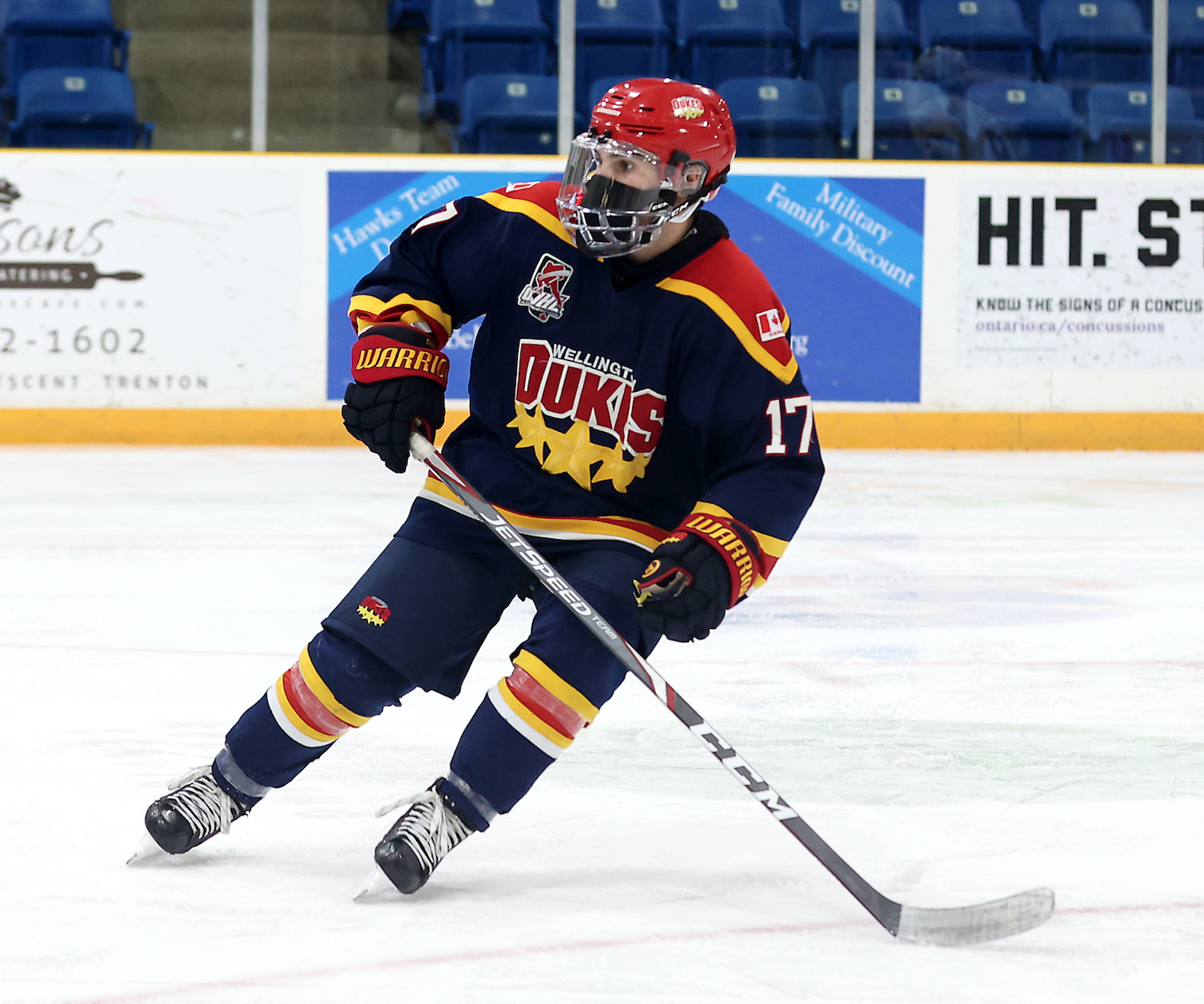 Just over two and half minutes later, Brodie McDougall’s first of the series was a laser beam from just inside the blue line off the faceoff to Ranger’s right’

But the Golden Hawks had something for the Dukes midway through the frame as Dalton Bancroft, Matteo Disipio and Jake LaVille all lit the lamp for Trenton, busting out to their first lead in the series.

That lead would last just over a minute in total.

Woodhouse, who has been magic around the Trenton net, put the puck to the lip of the crease and let White do the rest as Wellington’s leading goal getter knifed a tip in through the legs of Ranger at 15:52.

Owen Kruse would bag the Game 4 winner, sniping the only goal of the second as the Burlington, ON native started the play on a nice angled dump in that was collected by sophomore Joynt.

Joynt played the give and go perfectly, shovelling a back hand pass to Kruse at the top of the crease at the 11:47 mark.

In the third, the Dukes built on their lead and it was Woodhouse torquing a blast from the slot area through Ranger at 6:06 to put Wellington up 5-3.

In the later stages, McDougall ripped his second of the contest on the power play to finalize the scoring at 6-3 Dukes.

In addition to scoring, Woodhouse had four assists.

For the second game in a row, the Golden Hawks would pound away at the Wellington goal but Shiller made 51 saves for the win.

McGowan was back in the Trenton net and it was Ignazzitto opening the scoring again, beating the Foxboro native just 21 seconds off a tip from rookie defence man Aaron Brown.

White’s seventh goal of the series would give Wellington a 2-0 lead at 9:03.

Trenton was quick to respond at former Duke Bancroft’s tip in on the power play carved the Dukes lead in half at 2-1.

The goals were coming quick partway through the period and just 30 seconds later, Wellington restored the lead of an nice sequence from the face-off at centre ice. The Dukes controlled the draw off the face off and the trio of White, Woodhouse and McDougall took Trenton to task in the Golden Hawks end.

Finally, after a Trenton skater nary breathed on the puck for the entirety of the shift, Woodhouse and Ben Addison played pitch and catch with the defender finding the wide open forward with a nice seam pass at 11:31 for a 3-1 Wellington lead.

But Wellington had trouble in the back half of the frame.

Bancroft set up Campbell at 15:58 to make it 3-2 and then, with time winding down, a puck was sent into no man’s land in the Dukes zone. Killing a penalty, Wyatt George caught up with the disc and fed the pesky Griffin Fox in the slot with 16 seconds left in the period to make it a 3-3 game after 20.

Former OHLer Andrew Bruder would push Trenton ahead at 12:22 of the second and Campbell’s second of the game on the powerplay at 17:32 built a 5-3 lead from which Wellington would come back and reinsert themselves into the driver’s seat, only to see Campbell cap off a hat trick effort in the late going of a contest that wound up 6-6.

After Wednesday’s Game 6, the Golden Hawks will host Game 7 on Friday afternoon at 1:30 p.m.

Check out the action on YourTv Belleville with David Foot and Lindsay Harren or on HockeyTV with Allan Etmanski.

Craig Foster has the call on County FM 99.3.