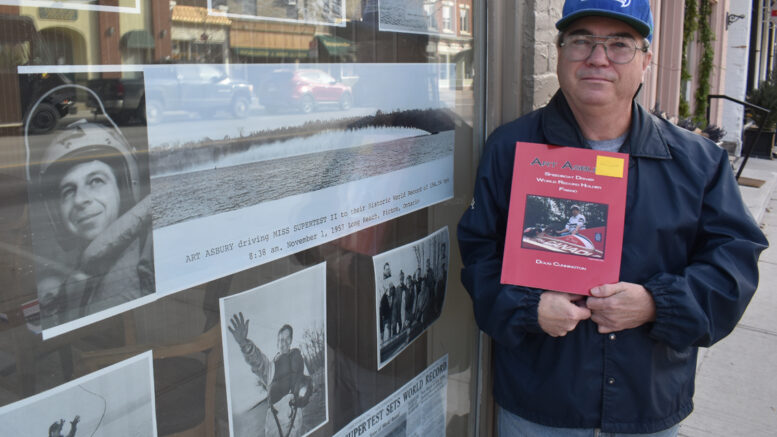 MAKING THE MARK Local powerboat historian John Lyons holds up Art Asbury: Speedboat Driver, World Record Holder, Friend by Doug Cunnington. The biography details Asbury’s Hall of Fame career including his run behind Miss Supertest II at Long Reach which set a world water speed record in 1957. Lyons is in front of John's Barbershop where a tribute to the world's record attempt and Asbury hangs in the window. (Jason Parks/Gazette Staff)

The legacy of the man who first brought the roar to Long Reach, put Picton on the map as a powerboat racing haven and set the stage for the 1960 and 61 Harmsworth Cup races being held locally is being honoured in a detailed and fully illustrated biography.

Art Asbury: Speedboat Driver, World Record Holder, Friend details the life and Hall of Fame career of the Dwight, ON native who was behind the wheel of Miss Supertest II on Nov. 1, 1957 when the hydroplane boat and its Rolls Royce engine roared the full length of Long Reach from nearby Forester’s Island all the way to Picton Bay proper and then back in search of infamy. 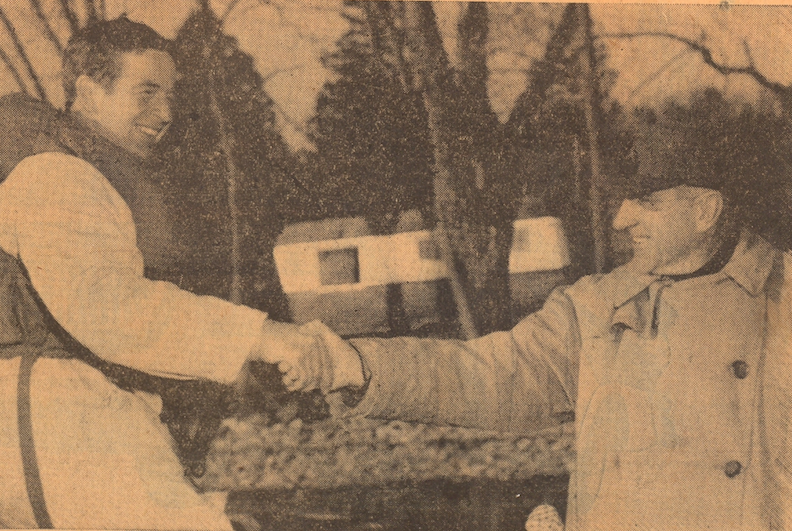 The back-and-forth run would average out to a mark of 184.54 Miles per hour and set the world water speed record and while the mark would only last a few weeks, the notoriety of the successful bid helped the Thompson family lay the groundwork for a future parlay into the Harmsworth Unlimited Class races with pilot Bob Hayward and Miss Supertest III in the coming years.

Doug Cunnington who knew Asbury as his friendly ‘Uncle Art’ has pieced together hundreds of news articles and photos including many that appeared in the Picton Gazette, countless first hand stories and personal photographs including a few from the Sibthorpe family and even Asbury’s hand written notes about the various limited class Canadiana Racing Team vessels the driver piloted and worked on throughout his career which culminated in his election to the Canadian Motorsports Hall of Fame in 2001, two years before he passed away at his home in Bobcaygeon, ON.

Other aspects of the book include Asbury’s time as a member of a B-24 Liberator bomber crew in WWII and his time as a “community-minded” guy and a humble friend to anyone who was lucky to meet him.

Cunnington had always heard about his uncle driving speed boats and can recall at the age of 12 Asbury showing up at the author’s childhood home with a pair of hydroplanes in tow. Cunnington was 16 when he and his family travelled from the Huntsville area to western Ontario for a family visit and dropped in on uncle Art at the shop in London where preparations were underway for the world’s record attempt later that fall in Picton.

“I remember there was a lot of family pride with regards to what he was trying to do,” Cunnington told the Gazette. “I think the family was kind of wondering when Art was going to settle down and get one of those 9-to-5 jobs that everyone else had and that he wasn’t fitting the mold (Laughs). But once he set the world’s record, there was a realization that he was really on to something.”

Roaring down a calm Long Reach at speeds never reached before by a watercraft provided a lifetime of exhilaration in mere moments for Asbury and while he would be known as a record breaker, the unlimited class was a bit too much of a wild ride for him.

“He had concerns about Miss Supertest entering the world of racing and I’ve included his hand written notes in the book that detail his thoughts on the Thompson boat,” Cunnington said. “What Miss Supertest did for my uncle was kick start his career in the class speed boat racing world with the Canadian Racing Team.”

Cunnington, a retired school teacher who has written a handful of historical novels always had the idea of writing about his uncle and the COVID-19 pandemic put those plans into action.

“The number of people he knew and met over the years is mind boggling,” the author said. “He never really talked about his career too much, he would speak about it if you asked him but he was pretty humble. He would always say “Oh, it was just in a days work.” While Cunnington maintained a scrap book of news clippings from his uncle’s power boating exploits, he paid tribute to family friend Chuck Boothby for story leads and artifacts as well as Picton’s power boating historian John Lyons who forwarded several Gazette articles, photographs, etc to help build the chapters about the red letter day of Nov. 1, 1957.

Cunnington is hopeful that the book will be picked up and stocked in local book stores.In the mean time, he is fielding online orders at dcchowie@hotmail.com .