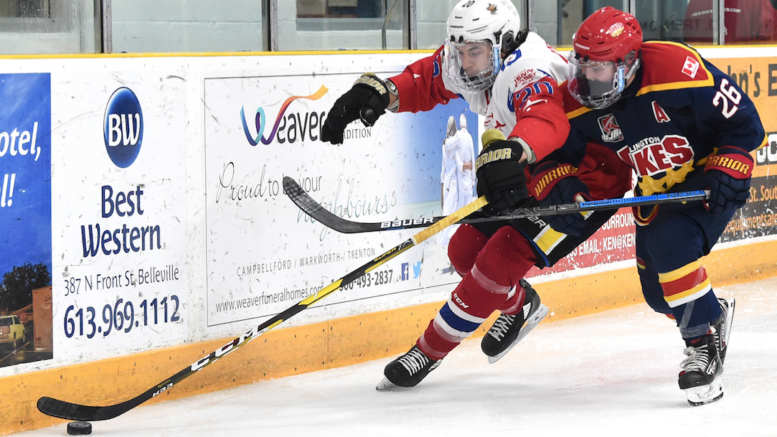 It’s down to one game between the Wellington Dukes and the Trenton Golden Hawks in the 2020 Hasty P’s Cup Summit Series.

Wellington, with a comfortable lead and a chance to clinch over the last two games has seen their lead in the exhibition eight game series evaporate, setting up a winner-take-all affair on Wednesday at Lehigh Arena. 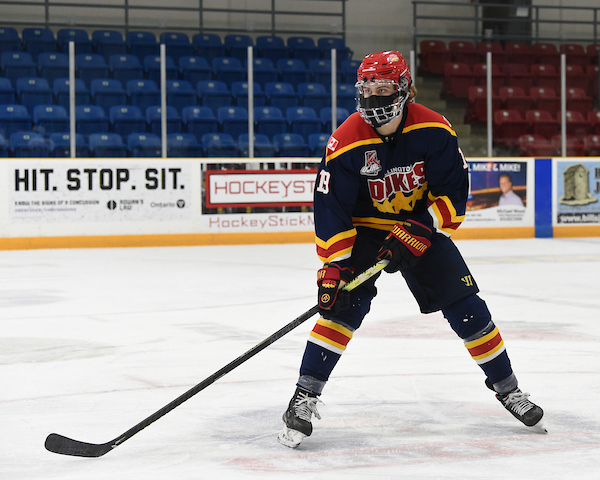 It’s not as if the locals have been exerting their dominance in the meet up which has been serving as a sort-of Jr. A hockey-like substitute in the void of regular season Ontario Junior Hockey League action. In fact quite the opposite.

Despite being outshot and outplayed for swaths of time over the first half dozen contests, the Dukes took a 2-0-3 record into Game Six on Wednesday in Trenton only to be stymied by the Golden Hawks and net minder Joe Ranger in a 1-0 loss.

Wellington would come up goalless again on Friday at the Duncan MacDonald Memorial Gardens in a 3-0 whitewash and everything that was going right for the Dukes suddenly isn’t.

Trenton Coach Peter Goulet said his squad has shown marked improvements since the start of the series.

“The last two games have been start to finish,” Goulet told the media after Game 7. “Guys have done a great job; they have bought into what we are doing.  You can see things improving every game.  This is not over, however.  No one won anything here today, so we have to keep our feet on the ground, we have to be ready to go next Wednesday.”

Wellington bench boss Derek Smith thought the series would be a close affair and the ebb and flow have revealed a one game, winner-take-all contest.

“Going into the final game all tied up is where I thought this would be.  This is going to be fun,” Smith said.

The coach said  his club didn’t put forth its best effort in Game 7 but were going to learn from it.

“One positive thing I have seen in the last two games is the great goaltending both teams have had.  Eli Shiller and Ethan Morrow have played great for us.  Joe Ranger has been strong for Trenton.  We need to get more pucks to the net and make life difficult for them,” Smith added.

One shot was difference in Game 6 Wednesday as Trenton skated off with a 1-0 win.

After a scoreless first, both teams would waive at empty nets midway through the second including Wellington’s Brodie MacDougall who could have broken the ice if not for a sprawling stop by Ranger.

Shiller was also scintillating in his 40 minutes of work.

Just under seven minutes into the third, it was Andrew Bruder from the half wall picking the top shelf through a screen past Shiller for the game’s opening marker.

James White, who had been automatic in the series up until, would get a glorious chance to bury a game tying effort off the rush with about a minute left but a Ranger kick save and dislodged net ended the threat.

Off an ensuing face-off, Wellington again slipped a puck past Ranger but defender Brannon Butler picked the tumbling biscuit off the Trenton goal line and preserved the 1-0 win.

For Game 7, the Hawks remembered the late Capt. Jenn Casey, a media member of the Canadian Forces Snowbird team who was once stationed at CFB Trenton and passed away during a crash in British Columbia earlier this year.

Trenton was quick to the attack and it was Wyatt George shovelling a puck through Morrow off a scramble at the 7:01 mark of the first.

Trenton would extend their lead with the benefit of the power play in the middle stanza.

A Kyle Robinson point shot that slowly leaked through Morrow and came to rest behind the Wellington goalie and in the net 5:56 of the second.

Then, later in the frame, Griffin Fox’s blast deflected past Morrow at the 12:30 mark.

Wellington and Trenton face off for the first Hasty P’s cup at 1:30 p.m. at Lehigh Arena.