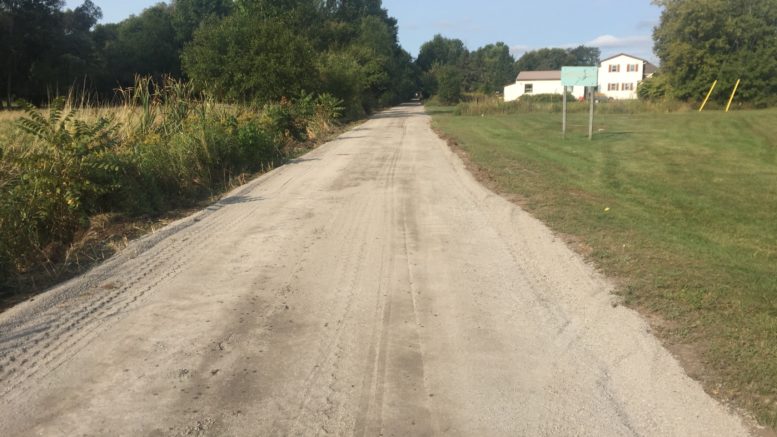 Two of the four proposed launch points for the Millennium Trail forwarded by the Prince Edward County Trails Committee through municipal staff have been approved by Council.

The Rest and Staging areas, which were modelled after the existing Wellington kiosk and would include parking areas and kiosks that would list rules while using the trail, a map of the trail, some local history and a map equipped with local business information have been approved at Consecon’s Salem Road and Hillier’s Station Road.

Neighbouring property owners in Bloomfield brought forward safety concerns regarding the proposed Stanley Street launch point due to an influx of traffic on one of County’s busiest roads and Council chose to deny that propsoed area as well as the Lake Street trail head area.

Council heard from a concerned resident that traffic numbers in 2017  indicated  an average of over 4,000 vehicles travelling on Stanley St. on a typical July day and those volumes have increased during the pandemic.

“That ultimately results in hours of backed up traffic which means residents in this immediate region have to be strategic as to how to even access their own driveways. That has presented safety concerns over this past summer in particular,” she said.

Coun. Phil St. Jean echoed these concerns, saying another entrance/exit point is not welcome on the County’s fourth busiest road.

He also added that with future approval of housing development, several more access points to the trail throughout the County could be added.

Several councillors along with Mayor Ferguson also expressed traffic concerns at the area of Lake Street, stating it would become “an accident waiting to happen.” However, others along with County staff felt that because the area is already a parking lot, it wouldn’t necessarily cause additional traffic issues.

In July, Council referred back to staff for a report exploring alternative locations to all four launch points.

In Consecon, the Salem Road location was noted as cost-effective for development as it is the closest location to the hamlet with no major site grading required to the parking area. The Novotny Court alternative was not recommended due to required vegetation and tree removal to develop a parking area and exhibits lack of visibility to the main road.

Hillier’s alternative location was Jack Taylor Park on Station Road but was declined due to indirect access to the trail. The road is also marked at 50 kilometers per hour with curves and a limited shoulder.

Bloomfield and Picton both had two alternative locations to Stanley Street and Lake Street, respectively.

A staff review recommended moving forward with the originally proposed launch point in Bloomfield rather than considering the nearby Mill Pond Park location due to lack of parking and sidewalk access. Staff also reviewed an alternative location at Shannon Road, but noted concerns with a forced pedestrian crossing and lack of sidewalk.

Staff explored Upper Lake Street and County Road 1 as two other options in Picton, but decided against them due to pedestrian safety crossing the road, and no direct access. While County Road 1 does have direct access, it does not provide a connection to Picton. Some of the land is also not County-owned.

Upon budget discussions, County staff said the annual operating costs associated with the kiosks would cause increased demand on the County’s budget for garbage collection, toilet cleaning and pump out, maintenance of gravel and grass cutting. However, with potential community volunteers covering minor maintenance, which is currently done for the existing Wellington point, could reduce those costs.

Council announced there is a deficit of $59,756 to construct the launch points, which would be reduced with the approval of only two sites. The PEC Trail Committee committed to fundraising any short-fall costs, and not relying on the municipality to cover any unforeseen funds. The committee has raised $128,250 for the trail project.

The two launch points are expected to be constructed and open to the public in 2021.