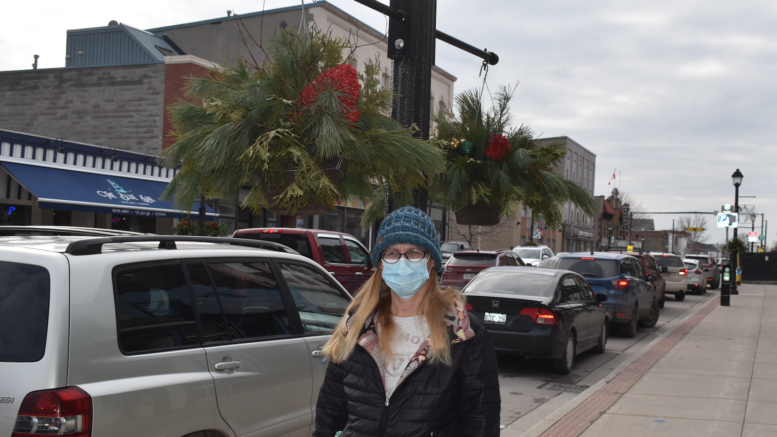 BEWARE- Local woman Ingrid Pierson stopped by the Gazette office last week to speak about her 2019 collision with a hanging flower pot on Main Street. When the Gazette inquired to the municipality about the matter, the County of Prince Edward removed the baskets and stated they would be working with the Picton BIA on a solution. (Jason Parks/Gazette Staff)

Hanging festive baskets installed by the Picton Business Improvement Association have been taken down temporarily in the downtown core as a matter of public safety.

The removal of the baskets decorated with evergreen boughs and other Christmas season decorations  was completed Monday evening, just hours after the Picton Gazette inquired to the municipality about their positioning on lamp posts. This line of inquiry came about when a Picton woman came to Gazette office to tell her story of being severely injured last summer when she walked into a hanging flower basket and reportedly knocked herself unconscious. 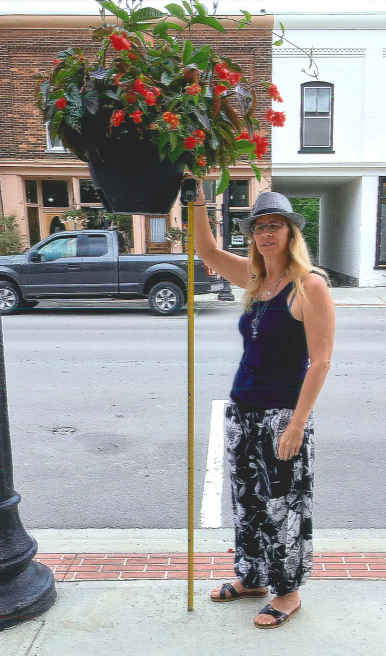 Ingrid Pierson where she reportedly knocked herself unconscious in June, 2019. (Submitted Photo)

County of Prince Edward spokesperson Mark Kerr said the municipality was taking the baskets down while a solution is developed.

“As we take the safety of the public seriously, we are temporarily removing the baskets,” Kerr told the Gazette. “The municipality is working with the Picton BIA to come up with a solution that ensures the baskets will hang from a suitable height in the future.”

The matter started last week when Ingrid Pierson approached the Gazette with concerns that, in spite of an injury she suffered and a settlement having been negotiated between her lawyer and the municipality’s solicitor, the practice of hanging baskets or flower pots on light posts in Picton continued. The baskets are part of a Picton BIA initiative to beautify the town and in summer time, bright annuals bring a splash of colour to Main Street. More recently, Christmas designs were installed by the Municipality who own the light standards.

However, the height of the hangers, which leaves the bottoms of installations just over 5′ off the ground, often leads to people bobbing and weaving around them as motorists-turned-pedestrians exit their vehicle and attempt to walk on to the sidewalk. Visual evidence of close calls (and even the odd cranial collision) can be viewed daily during the summer time from the windows of the Gazette office.

“My sister and I had parked on Main St. to go to the Yum Club and I thought I had forgotten my phone in the car,” Pierson said. “I went back across the street to my car and I was coming around the back of it. As I was stepping up to the curb, I hit my head on the bottom of the flower pot and knocked myself out. The next thing I can remember was hearing the voices of two french tourists.”

Pierson said she embarrassingly picked her self up and went back to the restaurant, telling her sister what had just happened. The Picton woman went home after a couple of hours after becoming increasingly ill and disoriented.

Pierson made inquiries to the municipality and the Picton BIA about what had transpired a day earlier without much success. A nurse practitioner diagnosed Pierson with a concussion and the woman still battles post-concussion symptoms daily. Symptoms and pain grew worse for Pierson by the day and by the sixth day, she knew something was seriously wrong with her upper back and neck. At that point, she contacted a lawyer.

Over the last 17 months, Pierson has seen a plethora of physicians, concussion doctors, pain specialists. And nothing about her condition is improved.

“They are going to try and burn the nerves in my neck and I’m on pain patches.” Pierson said. “There’s really been no improvement.”

After some back and forth, the municipality eventual settled with Pierson who said her intention in contacting the Gazette was not to have the hanging baskets removed entirely but to have them elevated so that someone doesn’t befall the same fate.

“I totally agree that they are beautiful but who wants to be walking down the street and hurting themselves?” Pierson said. “They are hazards and I don’t want this happening to other people. I basically cry every day.”

While Pierson said she knows of other people who have struck the hangers while walking, Kerr said the municipality is not aware of any other instances of pedestrians sustaining injuries from the hanging baskets.

Informed the municipality had taken temporary measures to move the hanging baskets off Main street where people exiting parked vehicles might walk into them, Pierson said she was happy and relieved.

“I just didn’t want this happening to someone else.”