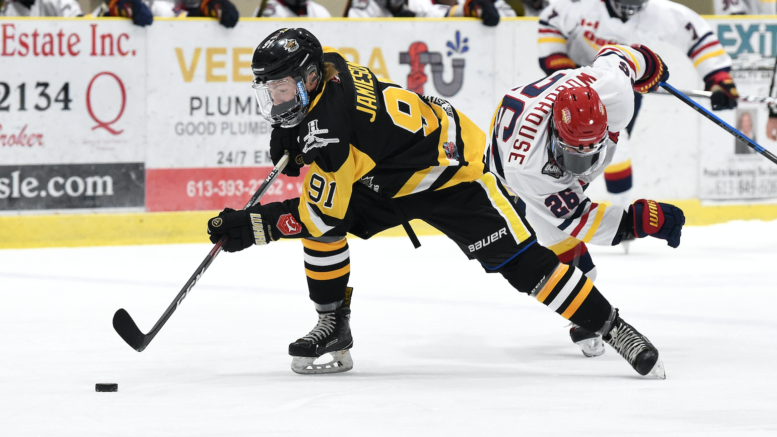 PULLING AWAY- Trenton's Aaron Jamison gets a step on Ben Woodhouse en route to a first period shorthanded goal in the Golden Hawks' 6-3 win over host Wellington in Game 8 of the 2020 Hasty P's Cup Summit Series. (Andy Corneau/OJHL Images)

When they look back on the 2020 Hasty P’s Cup, the Wellington Dukes are not going to have a very good feeling about the eight game summit series against the arch-rival Trenton Golden Hawks.

The locals had the series in hand and simply needed to win one more contest of the three remaining games to ensure they skated off as winners of this Ontario Junior Hockey League exhibition that was created and played out in the absence of regular season competition.

The series certainly served its purpose over the last few weeks, getting high end OJHL talent on the ice facing off against each other while under the stringent COVID-19 protocols laid out by Hastings Prince Edward Public Health, Hockey Canada and Quinte West and County of Prince Edward municipalities. Trenton’s Andrew Bruder always seemed to be lurking at the Wellington net in the latter part of the 2020 Hasty P’s Cup. (Andy Corneau/OJHL Images)

And while it’s never a good thing for a Wellington club to come up short in a series against Trenton (Which is something of a rarity over the course of Jr. A history betwixt the two ‘burgs) at least it wasn’t a loss suffered in march in the throes of actual OJHL competition.

Tied at seven points a piece heading into a winner-take-all Game 8 on Wednesday, the streaking Golden Hawks proved they had figured out how to play a non-contact game and all the bounces the Wellington Dukes had enjoyed over the first five games of the series were evened up by the hockey gods with relish.

In winning the final three games of the series, Trenton received a major shot in the arm as OHL returnees Andrew Burder and Joe Ranger paid huge dividends for the Golden Hawks and their impact came with an exclamation point in Game 8 at Lehigh Arena Wednesday afternoon.

With over 150 OHL games to his credit, Bruder was picked up from the Niagara Ice Dogs partway through the series and had five goals including a Game 8 hat trick to pace his club to a 6-3 win.

In net, Joe Ranger, formerly of the Mississauga Steelheads, pitched back-to-back to shutouts in Games 6 and 7 and only needed to be serviceable in Game 8 as the visitors exploded for half a dozen goals.

“When we left Wellington after Game 5, we were down 7-3 in points,” said Trenton coach Peter Goulet. “The guys never quit.  We had confidence all series, we believed in ourselves and what we were doing.  Joe Ranger got better and better as the series went on and made a huge difference.  I am proud of them.”

Bruder would open the scoring with a tip at the goal mouth off a nice feed from former Duke Dalton Bancroft on a 2-on-1 rush that just beat the outstretched leg of Wellington starter Eli Shiller at 10:38 of the first.

The Dukes would head to the powerplay shortly thereafter but it was the visitors padding their lead as Aaron Jamison fired off a shorthanded rush and beat Shiller low at 13:03.

Down a pair after one, Wellington’s Ben Woodhouse found the seem after a nice toe drag at the blue line and cut the Trenton lead in half at the 2:45.

Unfortunately, Wellington’s momentum didn’t last as the Golden Hawks would strike twice on the powerplay in just over a two minute span to effectively put the series deciding contest on ice.

Jamison’s second of the game was a tip in front of a screened Shiller at 6:45  and then Bruder tallied his second at 8:46 to make it a 4-1 game.

Whoodhouse, who showed no quit in the series and was deemed Wellington’s MVP of the 2020 Hasty P’s Cup kept the Trenton championship hopes on ice at least through the second intermission as his late marker with just over five minutes left made it a 4-2 score heading to the third.

Wellington would edge even closer in the third as Cole McGuire’s shot along the ice handcuffed Ranger at 8:44 and certainly gave the Golden Hawks something to think about.

Moments after McGuire’s tally, the Golden Hawks were again afforded a chance on a 2-on-1 rush but Shiller stretched out to make a big save and keep Trenton at bay in the interim.

But too many second looks and odd man rushes were part of Wellington’s defensive scheme in the last half of the series and the dagger-Bruder’s hat trick effort- was example of that. Eli Shiller lays out to make a save in the late going of Game 8. (Andy Corneau/OJHL Images)

After Shiller made a big stop to stone Wyatt George on another 2-on-1, Bruder was able to knife home a loose puck on the door step to make it 5-3 Trenton.

Griffin Fox would fire home an empty net effort in the late going to make it a 6-3 margin for the victorious Golden Hawks who were presented the 2020 Hasty P’s Cup from Summit Series title sponsor and former Duke Chris Auger on behalf of his Trent Valley Distributing.

Recalling the days of the old Dukes/Sting rivalry, Auger was happy to see the two centres faceoff and reignite the Bay of Quinte battle with a new wrinkle.

“That battle is very much alive.  The series was the talk of the community.  A lot of customers that came into TVD were talking about it.  The support in the Quinte area for these two teams is tremendous.  For TVD to be a part of it was great, and it is something that we hope will continue for years to come,” Auger said.

Dukes Captain Ben Woodhouse was a powerhouse in the final game and in the series, leading the way with three points in Game 8 and 15 points throughout.

He discussed the uniqueness of the series and COVID hockey with the media afterwards.

“It is not a regular season, and each day needs to be a grind.  You must keep working and preparing yourself to get better.  A series like this is only going to add fuel to the fire in the Trenton/Wellington rivalry.  I talked with our coaching staff and they agreed that this is only going to add more tension between the two clubs.  It has always been there, and it will continue to boil over,” Woodhouse said.

Dukes coach Derek Smith isn’t sure when his club will take the ice next but jokingly said he would be happy to see a different opposing sweater.

“We are looking forward to playing another team,” Smith said with a laugh.  “This has been a different season, and we have to look at approaching things in a new way.  We brought in some great veterans over the last few months and we also have some good young players.  The result was not what we wanted, but our development has been strong.  I am happy with how the guys have come along.”