Usually when neighbouring MP Derek Sloan makes the pages of Canada’s oldest community newspaper it’s because the Hastings -Lennox and Addington MP has done or said something so outlandish, so against the grain of progressive politics that it demands some of our attention.

This week is no different as the also ran in the this summer’s Conservative leadership race (Remember the Neverending Story Part IV: MacKay’s Muff?) is making national headlines for sponsoring a petition that questions the science and safety of potentially live saving COVID-19 vaccines.

The petition, which appears on the House of Commons website and has more than 31,000 signatures, calls into question the fast tracked development of COVID-19 vaccines, stating they are “effectively human experimentation”. The petition also says the development of a vaccine to fight the virus is “Standard, prudent safety protocols, such as prior animal testing, are being waved.”

The petition goes to call for the government to “preserve and protect our ethical, legal, and moral right to informed consent,” “legally ensure COVID-19 vaccines are voluntary,” and “require that vaccine safety studies comply with standards equal to or exceeding other pharmaceutical products,” among other things. Over 1,700 House of Commons paper and e-petitions are sponsored by MPs annually-Some with merit, some without and some downright kooky.

We’d let you, dear reader, decide for yourself which column this belongs to but know its author, Gisele Baribeau, is on the Board of Directors of Vaccine Choice Canada, a fine group of folks who encourage Canadians to forego immunizations and are still plugging the discredited hypothesis that vaccinations causes autism.

So far during the COVID-19 pandemic, Sloan has questioned a number of things: The loyalty of Canada’s Medical Officer of Health Dr. Theresa Tam, the mandating of a vaccine once one was widely available and the wearing of protective mask, refuting the science behind those as well. Sloan would say that, in this case, the petition is a sign that every one’s voice matters in the House of Commons, even those that run counter clockwise to the rest of Canadians who are weary and anxious to see the end of the COVID-19 nightmare.

But all of Sloan’s statements are the type of political parlour room theatrics that serve as nothing more than dog-whistles to the anti-vaxxers and conspiracy theorists that seem to be gravitating to the right side of the political forum and are helping to partially stave off a dwindling base of Conservative supporters.

Perhaps that’s these misguided souls only worth in this political ball game but it says here they need less light, not more. None of this is helpful outside the throes of a pandemic and extremely dangerous while living in the midst of one.

And these are Sloan’s positions, statements and motions on COVID-19. There’s a whole other lot concerning his stances on Bill C-6, the federal legislation aimed at banning the harmful practice of conversion therapy. Sloan and six other MPs were on the wrong side of that issue as well. MP Sloan seems to question a lot of things.

We would question how he might even remotely appeal to centrist or non-social conservative voters in Hastings and Napanee when it comes time to vote in the next federal election-if that’s anything someone who boasts being unapologetically conservative worries about. 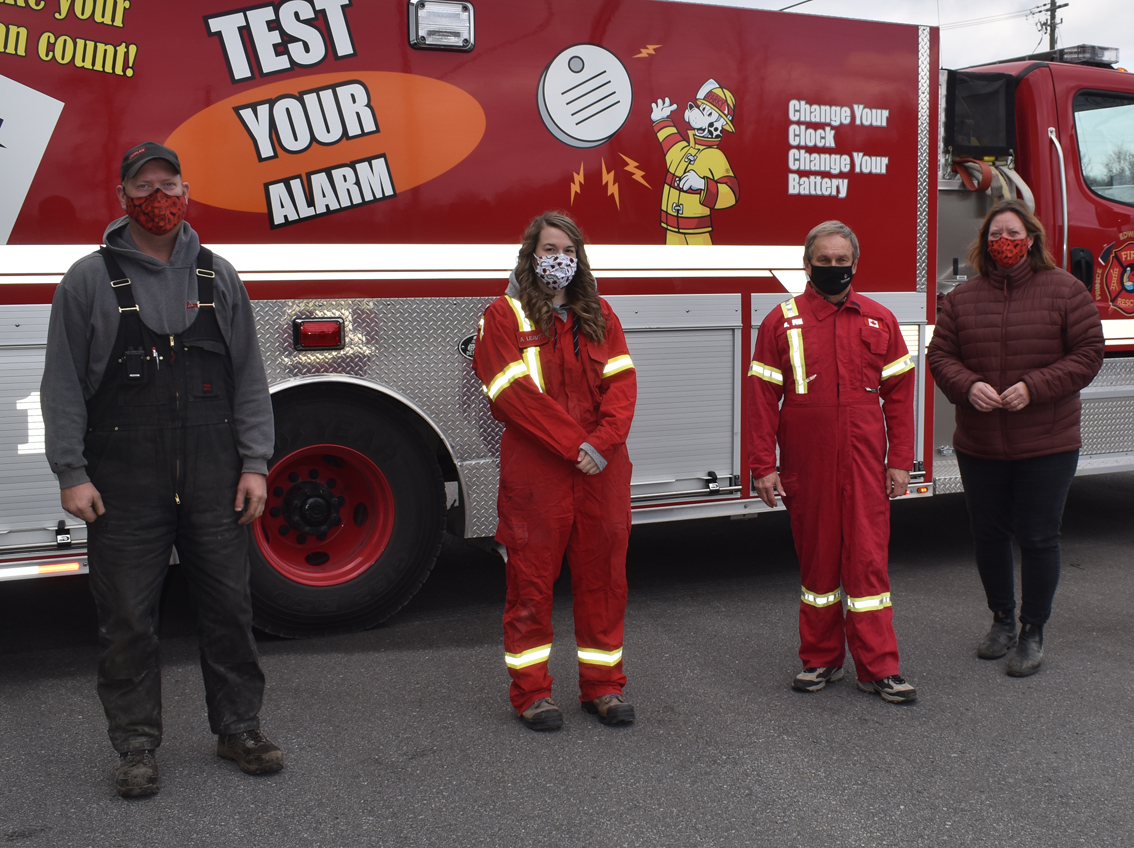 Loch Sloy supports Firefighters association – (Left) Steven Everall and (right) Jacqui Burley of Loch Sloy presented $2,628 to Prince Edward County Firefighters Association members Alison Leavitt and David Fox last week. The funds were Loch Sloy’s share of the popular Ghosts of Camp Picton Halloween spooktacular event. The funds will go towards several charities the Association supports on a monthly and annual basis in Prince Edward County. In 2019, the Association put over $6,700 back into the community through various causes and initiatives. (Jason Parks/Gazette Photo)