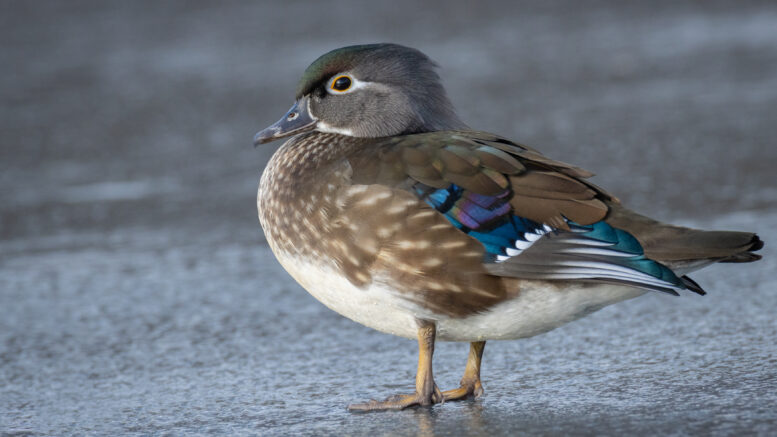 A wood duck with a broken wing stands perched on some ice in the Picton Harbour. (Paul Jones for the Gazette)

The Picton Gazette’s ornithological observer Paul Jones notes that for a second straight winter, a wood duck with a broken wing will attempt to survive the cruel Prince Edward County winter at the Picton Harbour.

Jones said the county is somewhat farther north for the medium sized migrating perching duck that typically spends the winter months along the Atlantic Ocean coastline in the southern United States.

“It is a bit of struggle for her to survive,” Jones said. “Unable to fly south, she has to make do as best she can. Sometimes the available open water freezes down to almost nothing, and the temperature can drop below what she was built to usually withstand.”

On the plus side Jones noted, the local citizenry regularly deliver supplies of bird seed for her to eat  and she has teamed up with some local Mallards for company.

“Having made it through at least one winter, chances are good that she will survive another,” Jones said, adding those looking for a glimpse of the colourful waterfowl can se her  just below Bridge Street at the base of the harbour.

“She is much smaller than the Mallard Ducks at the location and sometimes hides amongst them,” he said.