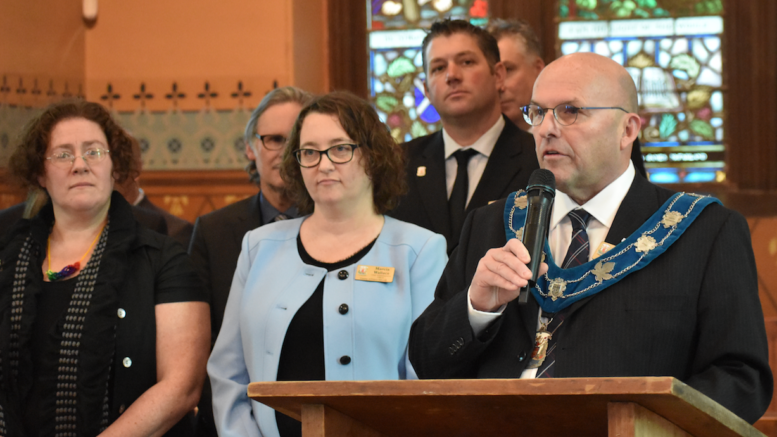 In the place of his annual New Year’s Levee address, County of Prince Edward Mayor Steve Ferguson is taking his message of reflection and prospects for the upcoming year to cyberspace.

After presenting a New Year’s message online earlier this month and speaking to listeners of County 99.3 on Monday, Ferguson visited virtually with the Rotary Club of Picton on Tuesday during their weekly Zoom meeting to outline where the County had been in 2020 and where it was going in 2021.

Suffice to say, this wasn’t just any regular, hum-ho year in the history of this island municipality. Plans for a regular New Year’s Levee have been shelved for a while due to the COVID-19 pandemic and Ferguson quipped that little has gone according to plan in 2020.

The Mayor recalled how in early January, 2020, no one could have foreseen a world turned upside down by the novel coronavirus and the associated challenges all Prince Edward residents would face due to this insidious threat.

“I’m proud to say Prince Edward County residents answered the call to keep each other safe. We stayed six feet apart, we wore masks and we limited our travel,” Ferguson said. “Changing our day-to-day lives hasn’t been easy and I recognize that many people have suffered physically, financially, emotionally and spiritually. I wish to thank everyone for doing their part to limit the spread of COVID-19.”

Despite the direness of the situation facing the community, the Mayor said he was inspired by the efforts and commitment of front line workers including doctors and nurses and personal support workers caring for those in hospitals and nursing homes. His worship also mentioned those working tirelessly at local grocery stores, pharmacies, restaurants and other businesses that ensured local consumers could still access essential items and services.

Ferguson also highlighted local service clubs, volunteers and not-for-profit organizations who reached out and ensured vulnerable segments of the county population weren’t isolated and left behind in the wake of lockdowns and reductions. The Mayor mentioned these shining examples of humanity during the pandemic offered a glimpse of the best of Prince Edward County.

“The municipality worked hard to respond to the pandemic. We strived hard to health, safety and well being of the community while ensuring our ability to offer services in new and innovative ways,” Ferguson added. “We managed to stay fiscally strong by focussing on the core services residents and businesses need most from us and that will remain a focus in 2021.”

With the arrival of a vaccination program, Ferguson said he remains hopeful there is light at the end of the COVID-19 pandemic tunnel but the community will still need to remain vigilant in the coming months to halt the spread of the virus.

“If we can slow the spread, I believe Prince Edward County is well positioned to bounce back in 2021 and beyond,” he said.

Among the key priorities for the municipality in the coming year include adopting a tourism management plan. The Mayor said tourism is vital to the local economy but balancing the needs of local residents is just as important as being a welcoming community for visitors. Also slated for investment in 2021 was infrastructure projects that address roads and bridges.

“In 2020, we undertook the largest road rehabilitation program in our history with more coming as we move forward with our asset management plan in the new year,” said Ferguson.

In terms of the upcoming new Official Plan, Ferguson said this updated municipal schematic will ensure a more predictable planning process and better align infrastructure with new development. Other key priorities included the work by the not-for-profit affordable housing group and its goal of developing properties that will allow young families to remain in Prince Edward County as well as support of the redevelopment of Prince Edward County Memorial Hospital, the redevelopment of HJ McFarland Memorial Home, better broadband access, food insecurity initiatives and better relations with the Mohawks of the Bay of Quinte.

Ferguson added the further modernization and delivery of services offered by the municipality will see some items go virtual.

“2021 will be another challenging but promising year for Prince Edward County. Staff remain committed to serving local residents,” Ferguson added.

During a question period among Picton Rotarians, Rob Leek asked Ferguson what a vaccine roll out might look like in Prince Edward County. Ferguson said preliminary discussions such as where a mass vaccine might be administered are taking place but that it was still early days in the process. In terms of further development and more demand on the County’s water and wastewater services, Rick Jones wondered how well the municipality was suited to hook up the number of developments in various stages of completion.

The mayor stated the town of Picton was ok in terms of potential capacity and whoever water service in Wellington would need upgrades to meet the demands of future development. The current depth of the municipal water intake in Picton was something that was also being assessed.

“We are looking at whether the intake will need to be moved further into the bay or elsewhere, “Ferguson said. “In an ideal world, getting water from the Wellington intake is good idea but the cost (Estimated to be about $20 million) is prohibitive.”