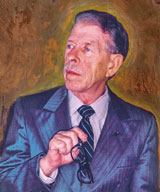 It is with great sadness that we announce the peaceful passing of Eugene Moszczynski at the Trent Valley Lodge Nursing Home on Friday, December 18th, 2020. Eugene of Carrying Place, was at the age of 97. Beloved husband of 65 years to the late Barbara Moszczynski (nee Wolar). Dear father to Susan Moszczynski (Richard Papp), and Edwin Moszczynski. Lovingly remembered by his grandchildren Samuel and Ian. Predeceased by his sister Krystina Krysciak (Jerzy) and brother Leon Moszczynski (Barbara) both of Poland and brother Edward Moszczynski in Kitchener. Eugene was born in Lodz, Poland in 1923. Eugene had an eventful and difficult life. It began at a very young age of 16 where he was arrested in April 1940 and taken to concentration camp Dachau in Germany with his brother Edward. This lasted for five years until they were liberated by the U.S. Army. Eugene found the love of his life Barbara and were married in 1947. To start a new life, they immigrated to Canada in 1948. As some of you may know, Eugene had a natural artistic talent. This got him through his time in the concentration camp by earning extra food and tobacco by doing artistic pictures. Eugene’s talents took him further by painting cartoons and pin-up girls on the walls of mess halls and dance halls during his work with the U.S. Army. When in Canada, he would paint for pleasure and give his work away as gifts to friends. After receiving his diploma in commercial art, he took his art professionally and became a staple in the community and is widely recognized for his efforts. His work can be seen in countries such as Poland, Germany, England, and coast to coast in Canada. Another trait Eugene possessed was his ability to draw cartoons and carictures. His cartoons use to appear in the Trentonian and Intelligencer for quite some time. Eugene also wrote a book about his wartime and subsequent experiences as a new immigrant to Canada, entitled ‘Will My Son Be a Prisoner of War’. Eugene also had worked at Bata Engineering as a Machinist before he moved to the Bata Shoe Division where he became a Draftsman. One of Eugene’s fondest accomplishments was becoming a founding member of the Quinte Polonia Club. To pass the time, Eugene would go fishing and ride his 750 B.M.W. motorcycle. Eugene was a loving dad and grandfather who tirelessly worked to provide and care for his family. Eugene’s life story epitomizes the best of what it means to be a successful immigrant and a patriotic Canadian. In keeping with Eugene’s wishes, there will be no visitation or service. In lieu of flowers, donations to the Alzheimer Society would be appreciated by the family. Arrangements are under the care of RUSHNELL FUNERAL CENTRE 60 Division St., Trenton  (613-392-2111). To leave a condolence, please visit www.rushnellfamilyservices.com