A 37-year-old Belleville man has been charged in connection with a series of break in in Picton and Wellington prior to Christmas.

Members from the Prince Edward County Detachment of the Ontario Provincial Police (OPP) are investigating four break and enters to businesses. Three businesses entered were in Picton and one in Wellington.

As a result of continued investigation by the Prince Edward County Community Street Crime Unit (CSCU) and the OPP’s Forensic Identification Services Unit (FISU) an individual has been arrested in relation to these break, enter and thefts.

Belleville’s Allan Laidley, 37, was arrested and charged with the following the Criminal Code (CC) offences:

The accused is currently in custody for unrelated occurrences and appears before the Provincial Court of Justice on Jan. 21, 2021.

In other OPP news this weekend: 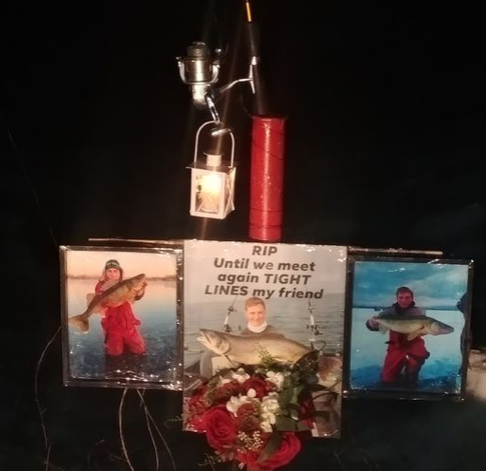 A memorial erected in memory of Tyler Ballance at Point Anne. (Facebook photo)

• On Saturday shortly after 5 p.m. members from The Ontario Provincial Police (OPP) Prince Edward County Detachment responded to a report of an individual who had gone through the ice. The report stated this was in the Point Anne area of the Bay of Quinte. OPP responded with emergency services from both Prince Edward County, Belleville and Trenton.

While the OPP did not release the name of the deceased, social media posts indicate Quinte Health Care employee Tyler Ballance, a well-known angler in the Bay of Quinte fishing community, lost his life Saturday. Memorials for the young and talented angler are being planned.

OPP Community Services Officer Constable Aaron Miller asked the public to stay on shore until temperatures are more consistent for on ice activities.

“While the ice may look tempting for ice fishing or other activities, please make the safe decision to stay off. The temperatures have been erratic this winter and most ice is not yet thick enough to safely support people. Don’t put your own life, and the lives of first responders at risk,” Miller said.

The Constable added if a person ventures onto the ice, the proper use of safety equipment can reduce the risks of traveling over ice covered bodies of water. Possibilities include: wearing of survival suits, carrying picks (used to grip ice to pull yourself out of the water) and carrying a rescue rope.

• Members of the Ontario Provincial Police (OPP) Prince Edward County Detachment responded to a disturbance on Jan. 8, 2021 just after 10:00 p.m. at a Richmond Street address in Picton.

Officers arrived and conducted further investigation. As a result, it was discovered that a party was in possession of prohibited weapons. Racheal Meehan, 29, of Picton, was charged with four counts of possession of a prohibited device or ammunition contrary to section 92(2) of the Criminal Code.

The accused was released on an appearance notice and is to appear before the Ontario Court of Justice in Picton on Feb.  24, 2021.