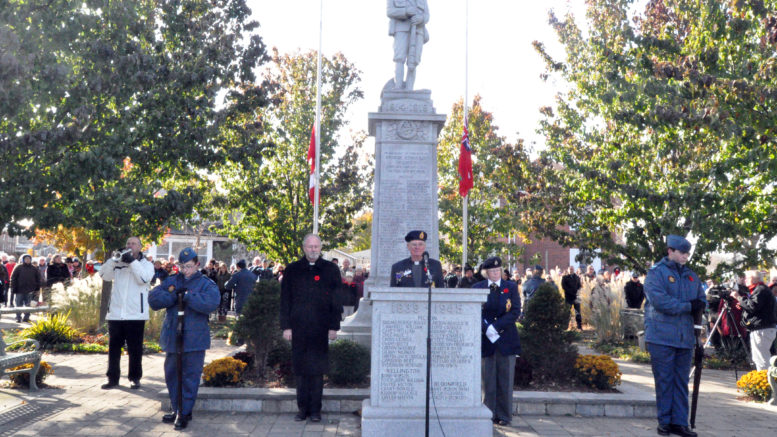 Picton's Cenotaph during the 2017 Remembrance Day ceremonies. Names from the memorial are being used to name new streets and roadways. (Adam Bramburger/Gazette file photo)

Inclusion of County heritage was a key element of Council’s discussion around new street and road names for Picton developments.

Council passed a report for naming streets and roads at Thursday’s Committee of the Whole meeting, which featured proposed street names that appear on the Cenotaph.

However, there were some councillors who felt naming streets after Cenotaph names, while important to local history, is not inclusive of the traditional land acknowledgement that Council supports.

Coun. Roberts raised the concern by saying though he’s in support of the Cenotaph names, there are many names of Indigenous peoples that are less well known.

“Our traditional land acknowledgment speaks to Indigenous friends as being here since the beginning. We also say that their historic Indigenous connection to the County is present and alive and that they live here – this is still their home. I’d like to ask going forward that we act on that land acknowledgement statement by re-inserting some kind of Indigenous presence on our streets and I would like us not to ignore that going forward,” he suggested.

Many municipalities across Canada, Roberts said, have street naming policies that see committees set up with specific street naming criteria, and posed whether this is something County staff would consider implementing in the future.

CAO Wallace said to look for this in the future, but that the current opportunity allows for new development to move forward.

“This is likely the last time we would be bringing a large package of roads that need names under the current practice, which is not a formal transparent policy but more of a tradition of using the Cenotaph names and other ways of remembering and that’s really the basis of all the names that are identified for these roads,” she explained. “Going forward as part of the by-law and policy review that the municipality is undertaking … We are looking at a celebration and commemoration policy that would help us deal with a whole number of matters related to this. We have some outstanding issues that Council’s left us in that category as well, so the idea is that we would bring back something that would allow for a more transparent, criteria-based approach, more participatory in the developing of such policies.”

Aynsley Osborne, Civil Engineering Technologist, said it was her understanding that once street names are passed through the by-law, the sign gets put up, but nothing more takes place in terms of an unveiling event.

The Foodland/Rollins Development across from No Frills, will see Street ‘A’ named George Wright Boulevard.

Coun. St. Jean suggested staff in some cases, specifically thinking of Wright, a highly decorated World War II veteran and a member of the Picton municipal police force for decades, should consider some way to commemorate the naming of streets.

“I don’t think I need to elaborate on his contribution to the community or his contribution prior to that – but I know for the sake of his family, that the recognition of this naming is a very important thing to them and I’d like to figure out some way to make sure they are engaged and see it collectively,” he suggested. “If you could bare that in mind as the sign goes up, I’d like to make sure they are certainly engaged and involved and know about this.”

Coun. Bolik touched on steering away from naming roads after people completely for a number of reasons.

“First of all, the policy of going from our cenotaphs, although it honours our heritage, it is terrible for diversity. As we’re looking at people who died before and up to the Korean War, we’re talking mostly about Loyalist people in the County and that’s not a very diverse population up until the 1950’s. Secondly, we have seen time and again that yesterday’s heroes sometimes become today’s villains,” he said. “I would suggest that we look at naming our streets not after people, but about things a lot less controversial.”

St. Jean agreed that when it comes to naming of streets, Council should be more cognisant of not just most recent history, but of the “shared multi-century history, which includes our Indigenous peoples, our people of French heritage and our people of English and other European language.”

“That is our history. History lives here and we need to recognize that. For that reason, I absolutely believe it is important we include some of the history without actually naming specifically a person,” he said.

Coun. St. Jean made a suggested amendment to the proposed naming of the Port Picton Development streets, saying he thinks it is important to recognize the former properties that once stood on the grounds, including Villeneuve Castle which exploded in 1986.

“That particular piece of our shared local history [should] be included in the naming of a private street,” he explained.

The Port Picton Development on Bridge Street will now name the five streets as follows:

The new Rutt Division, situated on the corner of County Road 3 and Loyalist Parkway, just before Taft Road, will see Street ‘A’ named Michael’s Way.

Gary Rutt, a resident, wrote to Council announcing his right of passage to name the street after his son, Michael.

“It was 32 years ago that my son Michael was taken from me at the age of 20, in an industrial accident, never to come home again,” his letter read. “It has always been on my mind, as I have been involved in the building and development business since my early retirement, that if I had the opportunity to put together a plan of a subdivision that required a road, I would do everything possible to have that street named Michael’s Way as a memorial to him. I firmly believe that the Rutt family has done their duty to help achieve our freedom we all share today.”

Editor’s note: An earlier version of this story misappropriated quotes at the beginning of the story. The quotes were from Coun. Bill Roberts and the story has been corrected.