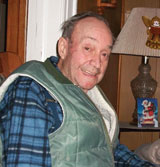 Peacefully entered into rest at the Prince Edward County Memorial Hospital, Picton on Saturday, January 16th, 2021, Carman Brown of Picton died at the age of 90. He was the son of the late Archie & Dora Brown (nee Clapp) and husband for 42 years to Beverly (nee Ferguson). Carman was the father of Wanda Seaborn (Steven) of Picton, Janice Jackson (Kevin) of Ameliasburg, Jon Brown, and Michelle Cole, both of Picton and is predeceased by son Colin Gorley, daughters Viriginia Kelusky and Deborah Spence (late Larry). He was the dearest grandfather to many grandchildren, great grandchildren and 1 great-great granddaughter. Carman is survived by his brother Wayne Brown, and his sisters Pat Beer, Dale Osmond and Sheila Sherman and will be fondly remembered by his many nieces and nephews. Mr. Brown is resting at the Whattam-Hicks Funeral Home, 33 Main Street West, Picton (613-476-2450). Private Family Services will be held with A Graveside Service in the Spring at Cherry Valley Cemetery. If desired, donations to Canadian Cancer Society would be appreciated by the family. Online condolences www.rushnellfamilyservices.com