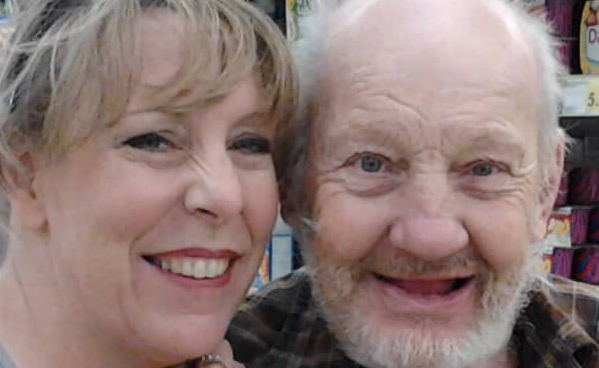 Editor’s note: Picton lost a familiar face last week with the passing of Doug York. While you may not have had a conversation with Dougie, there’s a good chance you have spotted him pulling his wagon full of empties on their way back to the Beer Store or stacked with Picton Gazettes ready to be delivered. Heartful County residents have always looked out for and looked after folks like Doug who add colour to our community and one of York’s many friends, Michelle Found, shares her remembrances.

I learned that Dougie York passed away, and it hit me. It just really hit hard and made my heart break.

Ol’ Dougie was known by anyone who walked or drove regularly through Picton. A pipe in one hand, and his other hand pulling a wagon towards The Beer Store… full of empty beer bottles that he’d collected that week. The guys playing baseball weeknights beside Picton Arena always left their empties for Doug to come and collect them, to reap the reward of dollars from the brown glass.

And if it was Wednesday or Friday, the wagon would be loaded with Picton Gazette newspapers. He’d stop at most of the stores around town (his “delivery route”) and proudly hand out the latest fresh-printed happenings from The County.

I’ll never forget an encounter at a local store on Picton Main Street about 31 years ago. I walked in and heard Dougie in a fit of rage. Hoping to calm him down, I went up to him and said “Hi Doug!”.

He spun around and pulled his arm back ready to punch me right in the face! When he focused and realized it was me, he lowered his arm (thank the Lord!), and I asked him what was wrong. He pointed to one of the employees and said “She buys all these papers and then takes them home and BURNS THEM!!!” (The employee stood and snickered at him as he shared his frustration with me… I wish now that I had gone over and slapped her for laughing at him!).

Dougie took pride in his “job” of delivering that important media and was enraged when she laughed at him. You see, many young, smart-assed kids over the years (and a few very immature ignorant adults, too) have teased and taunted Doug.

He just wanted people to be nice to him. When dealing with disabilities, life can be extra hard. So I think that’s why I always made sure I’d say a simple hello to him. And then as time passed, our conversations grew longer and deeper.

If I was driving, I’d slow down, roll down the window, and honk the horn and wave. He’d make sure he recognized me before waving… then he’d lift that arm, raising that pipe in the air, and would smile and holler back “Hello!!” Ol’ Dougie had wormed his way into a little corner of my heart.

Over the years after I had my boys, we’d see Doug when running errands in town, but mostly when we popped into John’s Barbershop. He liked to hang out there and catch up on the latest gossip. I always told the boys to stick up for Doug should they ever see anyone harassing him.

I remember seeing Doug sitting on a bench on Main Street one sunny afternoon. He’d been out collecting cigarette butts from the sidewalks (thankfully Owen hadn’t swept them all up). Dougie must not have had extra money for pipe tobacco that day, so he was squeezing the little bits of tobacco out of the cigarette butts and filling his pipe. Well, at least he was thrifty, bless his heart.

Around 2013 or early 2014, I realized I hadn’t seen Doug in a very long time. Then one day in June 2014 in No Frills, there he was! He looked so good! So healthy! So clean! And sure enough he recognized me. We hugged and had a little chat. The worker who accompanied him to get groceries kindly honoured my request to take our photo.

Fast-forward to July 2019, I was at my youngest son’s baseball game, and there was Dougie, waiting for the games to end to collect the empties.

All these years, still collecting his bottles. He said “Now I live right over there!”, and he pointed across the ball field to his house on Maple Street. After the game ended, and I walked back to the car to leave, I said to my daughter-in-law, “I’ll be right back!”. I raced back to the ball diamond, ran over to Doug, and said, “Dougie! Let’s get a photo!”.

So I snapped a pic and gave him the biggest ol’ bear hug and told him how I enjoyed seeing him again… and if I’m not mistaken, I think that’s the last time I saw him.
And now I’m crying again.

People don’t have to do anything for you to care about them. There are some people to whom God leads us, and He says to us “Just love them”.

And I loved Dougie.