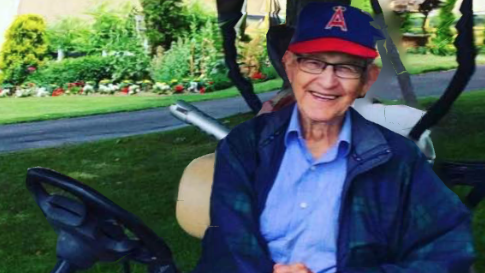 Your humble scribe didn’t have to beat an unknown trail or track down a phone number to speak with Prince Edward County’s newest centenarian this week.

Most of you know him as the great gardener who makes the passage along Loyalist Parkway between Wellington and Bloomfield more colourful.

Some of you know him as one of Prince Edward County’s best holstein cow men whose breeding stock was a highly sought after commodity for decades.

For me, I know Ross Parks, the patriarch of the Parks clan on the “Front Road” (as longtime locals refer the stretch between Bloomfield and Wellington to) as Poppy or Pop.

My grandfather turned 100 years old on  Tuesday, Jan. 19 and while the COVID-19 pandemic denied the mass gathering that would befit such an occasion, his day was undoubtedly made as over 150 cards and messages were either mailed or dropped off at his farm house in a socially distant manner. 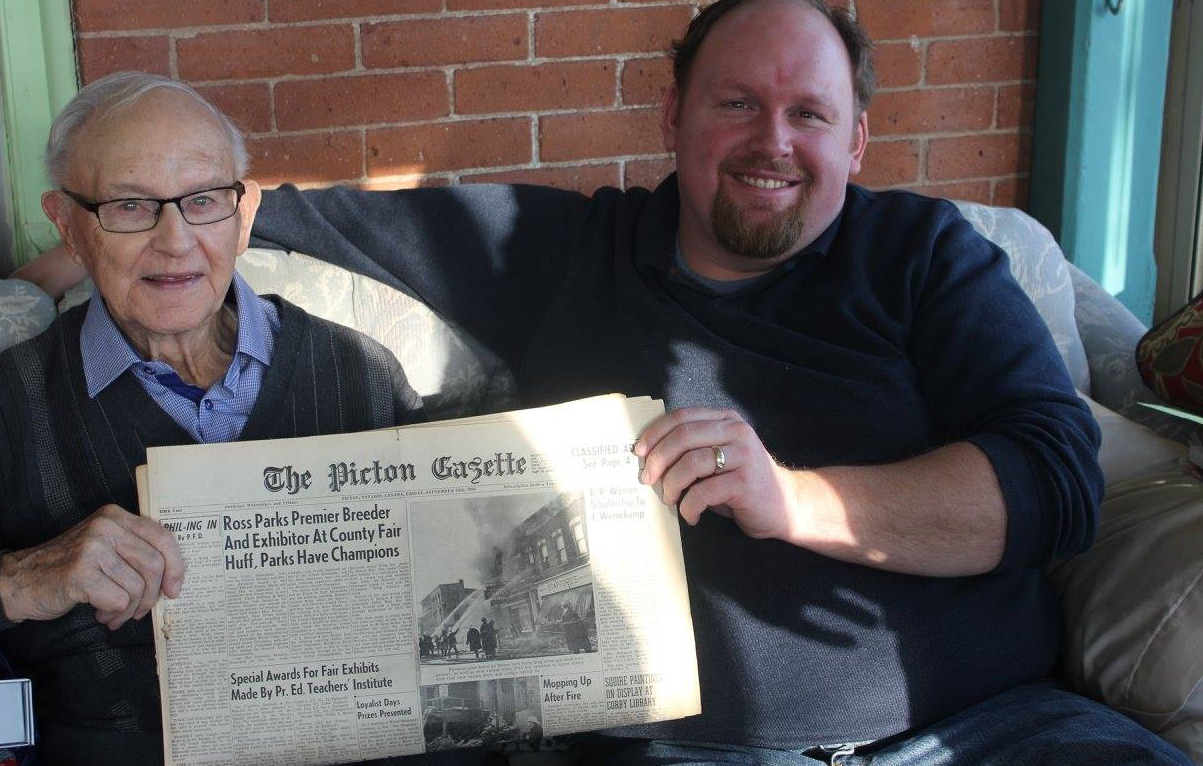 The author with his grandfather Ross Parks and a copy of the Sept. 3o, 1966 Picton Gazette detailing the latter’s win at the Picton Fair’s Black and White show. (Photo by Barb Parks)

Family and close friends, distant relatives and a good swath of appreciative strangers all reached and wished him well and those expressions of kindness were much appreciated by Ross.

See, my grandfather is a reader and a life-long learner so` opening up cards and notes was about the best gift anyone could have given him Tuesday.

“There’s a note here from a nurse at the hospital that treated me when I had pneumonia five years ago,” Ross said proudly as the stacks of birthday cards surrounded him. “Now, isn’t that wonderful?”

His 100th birthday aside, the stacks of correspondence, magazines and newspapers delivered to his home might have lessoned slightly in more recent years but volume of subscriptions that he’s held to dailies and periodicals would be in the hundreds if not upwards of a thousand if one was so inclined to undertake a tally. Everything that has reflected his passions over the last century has shown up at the farmhouse in print form.

Car and Driver for his love of automobiles and automotive technology. Maclean’s to keep up on national and international issues. Golf Digest to improve the game he picked up later in life. Hoard’s Dairyman to stay abreast of all the news in the cow world.

Getting the mail at Pop’s house involved heavy lifting most days.

A day after hitting the century mark, I asked Pop if he felt 100 years old.

“Oh yeah,” he said with a slight smile. “Up until I turned 92, I didn’t feel much different but I really feel my age these days. But I still look forward to what’s ahead.”

Ross’s acumen as a dairyman with a keen eye and streak of good fortune developed from an early age while under his father Oscar’s tutelage. He knew the value in purebred Holsteins and relied on the age-old adage that ‘If you look after your cows, they will look after you.’

It was humble beginnings for Pop and my grandma, the late Eleanor with rented land and a small herd of cows and calves when they married 1946 but success eventually came. With the class of animal produced at Parksdale Farms, the cows were proven, top rate dairy producing stock and the farm name was quickly known amongst the milking sect all over North America and even the world.

Cows with lineage tracing back to Parksdale wound up in America’s dairy land of Wisconsin, New York state and even England, South America and Cuba. 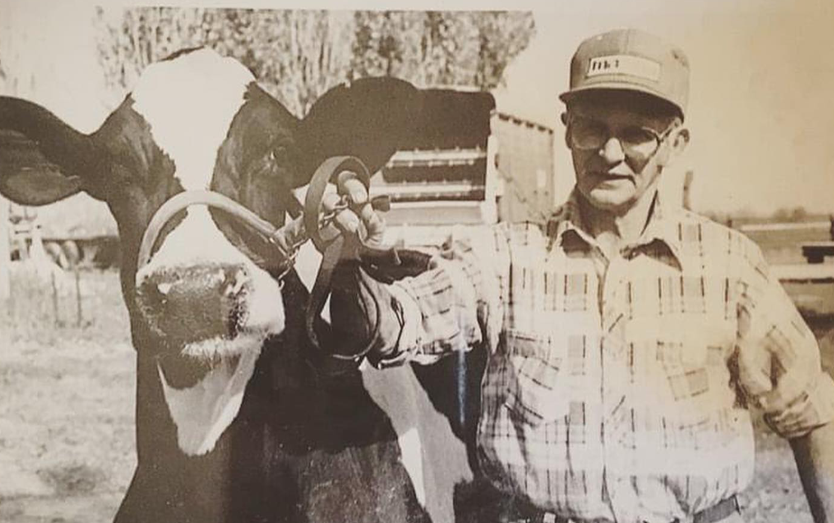 Ross Parks and one of his many prized Holsteins. (Parks family collection)

Pop would generally be at the top of the list at the annual Black and White show at the Picton Fair as the Parksdale name was amongst the very best for a long stretch of years.

A well earned retirement from dairying in the late 1980’s allowed Pop to discover new pursuits and talents.

He picked up the game of golf and, up until very recently, played a weekly round at the Wellington-on-the-Lake track. In his late 80’s, he was able to shoot around his age.

He also developed into a top notch pastry chef and one of his delectable pies earned $1,000 at a charity raffle.

Perhaps that outlook was something engrained on Pop before my grandmother, a well known elementary school teacher at Pinecrest Memorial, passed away. Always learning, always discovering something new.

But the most outwardly passion and one the public seems to enjoy are his flower gardens.

With the yellow barn and brick farmhouse that’s been in the Parks family since 1929 as the back drop, Pop’s plantings of geraniums, salvias and marigolds draw eyes every summer from locals and visitors alike.

In fact, a number of cards and messages on Tuesday thanked Pop for his gardening skills with one Wellington resident stating the flower beds made the drive to Picton “worth the trip in the summer time.”

Taking a page from father Oscar whose rock garden and colourful beds of pansies would slow traffic along Stanley Street in Bloomfield, son Ross has that same passion to colour the world just outside his front door.

Traditionally, as Oscar bought flowers from Creighton Lockyer, Ross sources his flowers from Greg Moore and Lockyer’s Greenhouse and even on a blustery mid-winter Wednesday, Pop couldn’t help but bask in the sun peering through his window and think about warmer days, what colours of flowers he might order and what lies ahead in his 101st year.

“Winter’s like a vacation but I’m already thinking about spring,” he said looking at the flower beds. “I have to move those salvias up a little bit this spring and I didn’t have enough marigolds last year so I need to make sure I order more.”