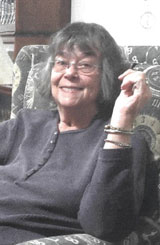 Peacefully entered into rest at her home on Friday, January 22nd, 2021, Shirley Jeffery (nee Thompson) of Picton, died at the age of 75. She was the daughter of the late Bryce & Ada Thompson (nee Cunningham) and loving wife for 54 years of Milton Jeffery. Shirley was the beloved mother of Stephanie Jeffery (Steve Kellar) of Picton and cherished ‘ma’ of Dalton (Bonnie) and Alexis. She is survived by her brother John Thompson (late Elaine) of Orillia and the late Donald Thompson. Shirley will be fondly remembered by her nephews Michael, Christopher, and Shawn and her niece Patricia and their families. Mrs. Jeffery is resting at the Whattam-Hicks Funeral Home, 33 Main Street West, Picton (613-476-2450). A Graveside Service will be held at a later date at Cherry Valley Cemetery. If desired, donations to Diabetes Canada would be appreciated by the family. Online condolences and to share memories of Shirley, please visit: www.rushnellfamilyservices.com