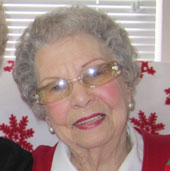 Betty June “Betts” McKenzie
98, beloved wife of the late Arthur LaVerne “Vern” McKenzie, loving mother of Gary McKenzie (Barbara) and Dale McKenzie (Paula); loving grandmother of Christopher McKenzie (Amy) and Scott McKenzie (Kristin) and the late Erin McKenzie; loving great grandmother of Connor McKenzie and Ian McKenzie; beloved daughter of the late John and Lillian Manning; cherished sister of the late Virginia Manning; beloved daughter-in-law of the late George and Leone McKenzie; dear sister-in-law of Geraldine Harrison (Percy), Wilma Rattray (Bill), Donald McKenzie (Marlene), Donna Vancott (Lawrence), and the late Gerald McKenzie (Carma) and Lorrain Ruttle (Bud) and David McKenzie (Judy); dear niece of the late Margaret Feiling (Mike) and George Polk (Ella) and Naomi Moore (Howard) and William Polk (Dorothy); treasured cousin of Nancy Brooks (Dan), Isabel Greenleaf, James Polk (Mary), William Polk (Debbie), Robert Polk (Alexis), and the late William Polk (Nancy) and Sandy Ogilvie (Kay) and Thomas Polk and Karen Martin (Chuck); and loved by her many great-cousins as well as her many wonderful friends. Betts met the love of her life, Vern, while on a fishing trip to Canada with her family when she was 12years old. They married nine years later during WWII living in Halifax, Nova Scotia while Vern served on a Canadian minesweeper in the North Atlantic. After the war, Betts and Vern settled in Cleveland and eventually North Olmsted, Ohio, where they raised their family. Betty’s legacy over a long, beautiful life was the spreading of her “joy” to everyone she met. Her laugh was infectious and will be remembered along with the kindness and love she gave to all. Most importantly, Betty loved her family with all her heart. Public viewing was held ONLINE ONLY on Friday, January 22, 2021 from 1-2 and 7-8 pm at JenkinsFuneralChapel.com. Private interment in the spring at Rose Cemetery, Waupoos, Ontario. Please no flowers, memorial contributions may be made to Hospice Prince Edward or the Alzheimer Society of Hastings-Prince Edward.  Celebration of Betty’s Life will be held at a later date. Canadian Arrangements entrusted to the Whattam-Hicks Funeral Home, 33 Main Street West, Picton (613-476-2450).  Online donations and condolences for the McKenzie family can be made at: www.rushnellfamilyservices.com