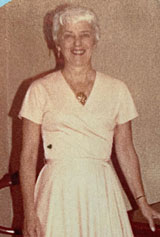 Joan Elizabeth Young
Peacefully passed away at the H. J. McFarland Memorial Home, Picton on Sunday, January 17th, 2021. She was the daughter of the late R.V. (Bob) & Edith L. Macaulay (nee: Harley). Wife of the late Pierre C. de Serres and later T. Harry Young. Predeceased by her sister Mrs. Helen Loucks and her brother Mr. Donald (Don) Macaulay, both of Toronto. Joan was the loving mother of Ms. Jan de Serres of Richmond Hill, and estranged son Mr. Robert (Rod) L. de Serres. She will be fondly remembered by her nieces and nephews. After attending public schools in Westmount (Town of Mount Royal) and MacDonald College graduating in Home Sciences, she met Pierre at McGill University and looked forward to becoming a ‘wife and mother’. Joan had fond memories of her first employer, a Montreal company specializing in Carrera Marble (when it was a 6 day work week). After marriage and adopting two children, and several transfers, the family settled in North York, enabling weekly family visits with her parents. She returned to the workforce coordinating Chaplaincy Services at the local hospital, later organizing blood donor clinics with the Red Cross, then Volunteer Services at old The Buttonwood Hospital in Weston for disabled residents. She met her second husband, Harry, while both were active members at St. Phillip’s Anglican Church in Weston/Islington. They honeymooned at Lake On The Mountain, and chose to retire to Picton and build a home. She was always involved with quietly providing services to the community – her churches, PTA, various Auxilliaries (including The Second TIme Around Shop), Meals on Wheels, supporting Service Club activities, PEC Yacht Club, even canvassing for charities while in her 80’s at the Westwinds complex or helping out her neighbours until she could no longer drive. A lifetime of Community Service. Mrs. Young is resting at the Whattam-Hicks Funeral Home, 33 Main Street West, Picton (613-476-2450). In keeping with her wishes, cremation has taken place and a Private Family Graveside Service will be held at St. Phillip’s Anglican Cemetery, Etobicoke in the Spring. If desired, in lieu of flowers, donations may be made In Memoriam to any of the following – The Canadian Cancer Society, The Alzheimer’s Society of Ontario, the Canadian National Institute for the Blind (CNIB), or other Charity of Choice. After a life of community service, any donations will be appreciated by the family. Online condolences www.rushnellfamilyservices.com