Even though I haven’t seen it in over 20 years, the look on my face, much like every detail of that horrific, life altering day remains etched in my mind.

I’m speaking of a photo someone in our party took in the hours after a friend had been swept away in a torrent of white water on the Rouge River just north east of Hawkesbury on the Quebec side of the provincial boundary.

Everyone on the post-PECI graduation trip in 1997 was praying for the best for our classmate Tanya Fox. But the look on my face, as I sat at that picnic table at a Calumet, QC area campground showed someone distraught, devastated and fearing the absolute worst.

Some know the story but for those that don’t, I’ll offer the abridged version. As had been the ongoing tradition for several years, PECI grads would organize amongst themselves a whitewater rafting trip after culmination ceremonies- three days of white water rafting and camping in the woods of western Quebec. After a three hour bus ride and tent set up, 18 or so hot and sweaty teenagers embarked for the river where we would cool off and imagine the good times that lay ahead. One last get together to kick off our final summer of adolescence.

We started swimming en masse to a rock island in the middle of the river as had been the custom for campers through the years. But this year, the water seemed to be higher. More rapid. Myself and some class mates arrived at the island and looked back. Tanya had started to lose pace against the current.

I moved to the end of the sand bar made of sediment left undisturbed by the current, trying to reach out to her. Scenes of panic replaced the yells and laughs of teenage frivolity that had filled the air just prior.

While she had been keeping pace previously, Tanya started to slip further down river and closer to a series of small water falls about one kilometre north of where the Rouge emptied into the Ottawa River.

Panic set in. In an instant, I decided to swim to her. I didn’t know what my plan was really. She was so tiny, maybe I could get to her, throw her on my back and swim to safety. If I’m being honest, I’m not sure I would have succeeded.

I got to within a few feet of her and was looking into her eyes when she was pulled under. Within two seconds, I reached the same point in the river and didn’t surface until 10 seconds later, in a short gap of river between the waterfalls. We never saw our classmate again. I popped up in the water down river after getting sucked under and around rocky point.

An otherworldly voice that boomed in my brain reminded me of my previous rafting experience and told me to swim with the current, head to the shoreline where the rocks have cracks in them and grab hold. I held onto one rock a few feet off shore. I slipped. Then I found a better rock to jam my fingers into. I held on and screamed for help.

Three friends- Jamie Lavender, Barkley Vanhecke and Jamie Lawlor- appeared running down the shore. They linked arms and made a human chain to yank me out of the water. Not only had I just experienced a close brush with death, I’d been involved in a tragic scene. Survivor’s guilt along compounded by being within inches and seconds of my own demise at the age of 19.

An hour later, the aforementioned picture was taken as someone in the group who was trying to stay positive that Tanya would be found safe. There would be relief and the snapshot would be a funny reminder of what almost happened. We came back to Prince Edward County the next day and would take part in a couple of grief counselling sessions before and after the funeral.

For a decade or more, I’d visit Tanya’s grave in Cherry Valley regularly, maybe drop off some flowers and say a prayer (still do) however, the tragic experience didn’t stick with my day-to-day thoughts.

But then kids entered the picture and the fragility of life started to feast on ruminating fears in my subconscious. Never mind the fact we live in a rather boring and peaceful place in the world, my kids wouldn’t be out of eyesight for more than ten minutes before my mind would start to envision all sorts of catastrophic scenarios and my anxiety would churn and churn and churn some more.

In my mind, my kids walking to the Gazette office after a day at PECI was akin to a 1,000 mile trek through the most dangerous jungle in the world. That worrying inflamed a generalized anxiety that eventually became debilitating. Constantly waiting for the absolute worst to happen in all situations and trying to live through that consistently pessimistic outlook on life was doing major damage to my mental health.

Despite a cheery veneer, there were some dark days where my anxiety would roil and those episodes started to become more frequent.

I was confused. In my heart I knew things were probably going to be ok but my brain would not stop catastrophizing over every scenario that came my way. Some piece of bad news was always lurking around the corner and whatever was in front of me was worse.

Eventually, a close friend suggested I get some help and talk about my feelings and for that, I will be forever grateful. Through therapy with the mental health professionals at Prince Edward Family Health Team, I processed and worked through my trauma.

I learned children are natural triggers for someone in my situation that’s experienced a traumatic event in their adolescence.

I started to understand there will be always be challenges that come up in life but worrying is like a rocking chair. There’s movement, but it doesn’t get you anywhere. I’m in a far better place than I was a year ago or even five years ago.

On this #bellletstalk day, I encourage those struggling to reach out and start the conversation.

It’s ok to not be ok but it’s not ok to think there isn’t help through health care providers to find the medical advice you need to improve your mental well being. Visit letstalk.bell.ca to find resources and simple steps to help maintain your mental health as well as links for further supports.

You can also connect with the folks at Addictions and Mental Health Services Hastings Prince Edward at 310-OPEN (6736) and they will be able to help you get started on your journey.

If you are like I was and in danger of being pulled into a river of despair, anxiety and bad thoughts, please reach up your hand out and call for help.

Someone will be there to grab it. 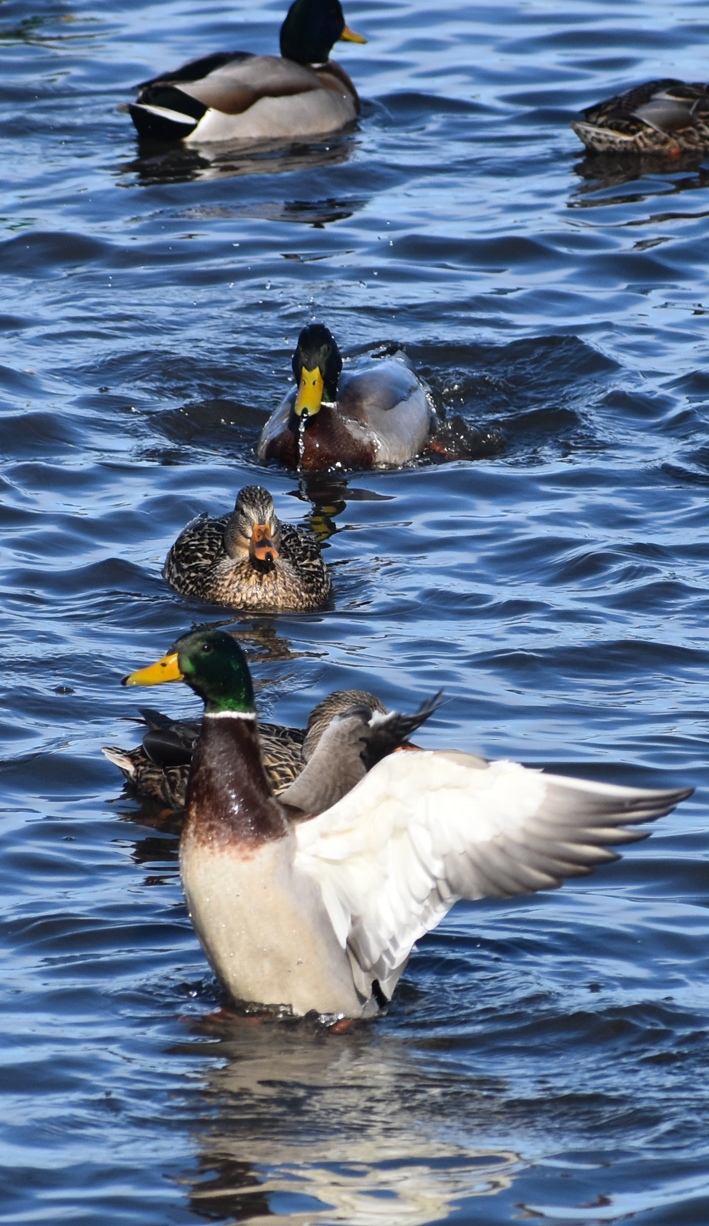 WATER OFF A DUCK’s BACK Even Picton Harbour’s winter time duck population was enjoying the sunshine on Sunday afternoon. (Jason Parks/Gazette Staff)