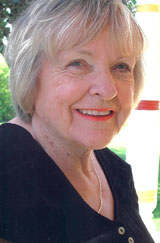 It’s with great sadness we announce the passing of our mother, Pauline Mary Jenkins, on January 30, 2021 at Prince Edward County Memorial Hospital, Picton Ontario. Pauline was the beloved wife of Ralph (deceased) for 51 years. Cherished Mom to Sean, Ralph Jr., Siobhan (David Harrison) Paula (Doug McLachlan) Brendan and Eamonn. Loving Grandmother to Jessie, Kevin, Alana, Carter, Lyla, Caitlin and Rafael.  Pauline was predeceased by her parents James and Margaret Brennock of Dublin, Ireland and siblings Philip (Flora), Tom, Margaret Boldy (Julian) and Doreen.  Mom was very fond of her in laws, Beverly Hykel (late Mike) of Toronto, Sandra Saunders (late Ross) of St Thomas, Deirdre DeMarchi (Richard) of South Carolina and Garth Jenkins (Solange) of Montreal. She was also a beloved aunt to numerous nieces and nephews throughout North America.  Pauline was born and raised in Sandy Cove, Dublin, Ireland where she enjoyed a wonderful childhood with her family and friends by her beloved Irish Sea. Those treasured friendships lasted a lifetime.  Pauline graduated from Sion Hill College Girls School and shortly after graduation worked in the banking industry in Dublin.  Pauline was always ready for an adventure, and in 1958 she travelled to Toronto to visit her brother Tom and to Yellowknife to visit her sister Peg.  Pauline loved Yellowknife and decided to stay one year working in a geologist’s office, with the thought of returning home to Ireland. Fate had other plans when she and Ralph met and fell in love. Now that was the beginning of the true adventures! Soon they were married and their son Sean was born in Yellowknife. Shortly after Sean’s birth, Pauline and Ralph took their son to Ann Arbor Michigan where Ralph had received a scholarship to pursue his studies in Civil Engineering at the University of Michigan. They welcomed Ralph Jr in Michigan, followed by Siobhan in Dublin, Ireland, while Ralph continued his studies in Ann Arbor. Upon graduation, the family reunited and moved to Port Credit, Ontario where Paula was born.  When they arrived in Beaconsfield, Quebec in 1966 they had four children! Their family was completed with the arrival of two more sons, Brendan and Eamonn. Pauline and Ralph loved raising their family in Gables Court and have many fond memories of their time there and the lifetime friendships that were made, particularly Pauline’s close friend, Kathy Miller, who continues to live in Gables Court.  Pauline supported Ralph’s professional interests that required extended relocations in various cities throughout Canada. In typical fashion, Pauline rose to the occasion and quickly adapted to new locations and made many new friends across the country, eventually semi-retiring in Picton, Ontario in 1998. They bought a lovely century-old farmhouse where they spent many happy years. After the passing of her beloved husband, Pauline moved to an apartment in Picton a few years ago, where she continued to enjoy her life, particularly spending time with her numerous friends as well as socializing at Lake on the Mountain.  She also enjoyed the company of the ladies of the Costmary Book Club and joyfully sang in the Shout Sisters choir for a number of years.  Pauline was a stylish lady who loved fashion and especially visiting her hairdresser Darek. Pauline was an avid reader, music and art lover, read the Globe and Mail daily and watched the BBC nightly.  She enjoyed movies and discussing current events. She loved her IPAD which kept her informed on matters of interest. She was an excellent tennis player in her younger days and loved watching tennis on TV cheering on her favorite player, Roger Federer.  Pauline had the best of Irish characteristics – charisma and warmth, gift of the gab, loyalty, toughness, full of fun, a keenness for all things spiritual, resiliency and unwilling to give up on life even as she grew older. Her clothes were often red, with matching accessories. She loved crazy shoes, jeans and yoga pants.  In spite of the medical aids in later years, she often looked gorgeous. Her recent purchase of a bright new red racy Honda was yet another indication of her optimism and sense of fun.  Unfortunately, Pauline faced many serious health issues over the last ten years, however that did not prevent her from enjoying her life fully. She was a tremendous fighter who was determined to persevere and she beat the odds many times. During those tough circumstances, Pauline was always the epitome of grace and courage. She was an inspiration to us all. She loved her family and her friends dearly and will be terribly missed. Rest now, Mom, knowing that you had a life well lived and that you were much-loved.  The family wish to express their heartfelt gratitude to Dr. Graham Burke, Dana and April for their dedication and support as well as the ICU medical team at Belleville General Hospital. Also, great appreciation to Pauline’s caregiver, Lorraine, who provided loving care to her. Pauline affectionately referred to Lorraine as her “angel”. In lieu of flowers, donations gratefully accepted to the Prince Edward County Memorial Hospital “Back the Build” at  www.backthebuild.ca
May the road rise to meet you,
May the wind always be at your back.
May the sun shine warm upon your face,
The rains fall soft upon your fields.
And until we meet again,
May God hold you in the palm of his hand.
When circumstances allow a funeral service and a Celebration of Life will be announced.  Arrangements entrusted to the Whattam-Hicks Funeral Home, 33 Main Street West, Picton (613-476-2450)