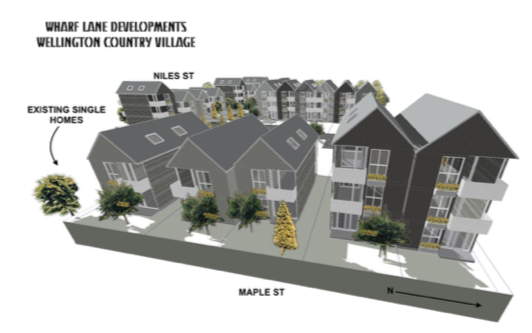 The push to turn the site of the former Dukedome into affordable housing for the village of Wellington is getting helpful assist from the Canada Mortgage and Housing Corporation (CMHC).

The County of Prince Edward announced the Prince Edward County Affordable Housing Corporation (PECAHC) has secured $180,000 in seed funding from the CMHC for the redevelopment of the former Wellington Arena site Friday.

“We are excited and appreciative to receive this initial support from CMHC,” said Charles Dowdall, Executive Director of PECAHC. “This is a significant milestone in this important project, and we look forward to moving ahead with the creation of new affordable rental housing in Prince Edward County.”

The seed funding from CMHC will assist with the costs associated with the due diligence and pre-development components for the project. PECAHC is transforming the site at 230 Niles Street in Wellington into a multi-unit affordable rental housing complex featuring one-bedroom and two-bedroom units.

“Access to affordable housing is key for the long-term health of our local economy and the vitality of our community,” Mayor Steve Ferguson said. “With the support of CMHC and the municipality, PECAHC is unlocking the potential of this site to keep more people in Prince Edward County instead of them moving away in pursuit of rental rates that they can afford.”

All of the units in the new development will meet the CMHC guidelines for affordability, with rents at least 20 per cent below the CMHC median market rent for the community. The finished site will serve all demographics.

“Securing safe and affordable housing for all is a government priority that improves our area’s social and economic wellbeing. It is fantastic that organizations like the Prince Edward County Affordable Housing Corporation have taken the initiative to address it in a community-centric fashion and I look forward to future collaborations as this project progresses,” added Bay of Quinte MP  Neil Ellis.

The municipality transferred the property to PECAHC in June 2020 with the intent of transforming the site into affordable housing. Construction is planned to begin between December 2021 and January 2022 with occupancy expected to take place 12 -15 months after construction begins.

The design and architecture of the site will respect the surrounding community. The development will incorporate energy efficiency features with the goal of reducing the overall carbon footprint. The finished site will be fully accessible for persons with physical disabilities. PECAHC intends to hold public consultation on the project in late summer 2021.

“This development is the first in what we hope will be a number of steps in addressing housing needs in the County,” said PECAHC board president Peter Landry.

PECAHC was formed as part of County Council’s strategic plan goal to build livable communities with affordable housing. The independent non-profit corporation works with the municipality, the Province of Ontario, the Government of Canada, and many local and regional community partners to ensure its work is collaborative and reflects the needs of the community. Learn more about the Prince Edward County Affordable Housing Corporation.