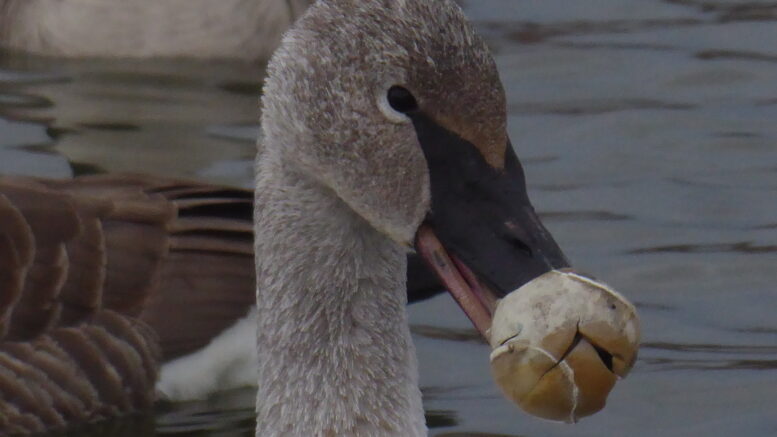 WILSON’S WILD RIDE- A Trumpeter Swan cygnet that earned the nickname Wilson from concerned local residents was in a dire situation over the past few weeks as a broken tennis wound up around its beak and made natural feeding impossible. However, Wilson’s story has a happy ending. Jim Agombar/Ian Barker photos)

Editor’s Note: The ordeal involving a Trumpeter Swan cygnet in peril at the Wellington Harbour a group of well meaning and heartfelt volunteers has a happy ending. The following is a first hand account submitted by Wellington on the Lake resident Jim Agombar on the efforts to free a waterfowl from its rubber and nylon nightmare.

Anyone who has ventured to the Wellington harbour docks to take in the beautiful scenery is usually taken aback by the large numbers of waterfowl that make the harbour their temporary home.This is especially true in winter, when frozen inland waterways and lakes drive the waterfowl to the last open sources of shallow water feeding areas along the shores of Lake Ontario.

Two examples of such areas are Wellington Harbour and Barcovan where moving currents tend to keep the water from freezing over and provide these waterfowl with the accessible bottom vegetation they require to get them through the winter. On any given day, one is likely to see over a thousand birds comprised of Swans, Canada Geese, Mallard Ducks and various others, feeding in the shallows. 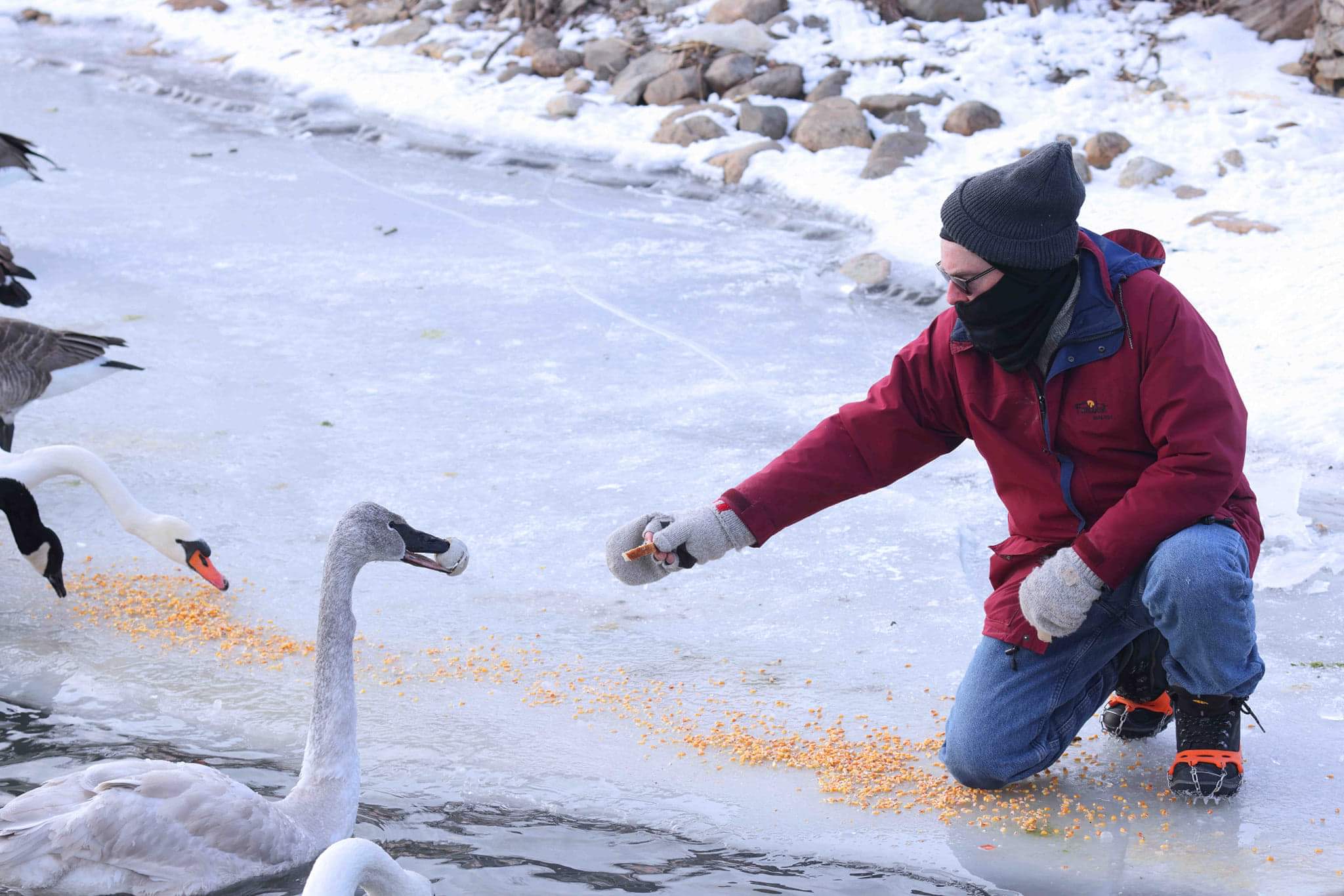 A favourite among many are the beautiful white majestic Swans that seem to immediately draw your eye as they gently glide among the waterfowl in search of a meal.

In the last month there has been something truly unusual in our harbour. A Trumpeter swan cygnet with an old tennis ball stuck on the end of its bill.

Don’t ask me how it got there. It was first spotted on Jan. 10th by Marcia Spelde who reported it to Kim Stevenson of the Ontario Trumpeter Swan Group Facebook page. This triggered a series of calls resulting in them contacting Ange OZ McLean MacIsaac, their contact to the Foster Forest Wildlife Orphanage operated by Dee Newbery near Trenton.

A request was then relayed to me to confirm the sighting of this distressed cygnet. Sure enough, there he was, with a ball attached to the end of his bill making it impossible for him to close his mouth. This would have to be a race against time to save him, since the ball prevented him from feeding in the usual way. Many ideas were suggested, as several volunteers and concerned individuals such as Dale Smith, a local WOTL birder and PEPtBO volunteer also got involved. Terry Sprague, our local naturalist, as well as Toronto Wildlife Centre and Sandy Pines Wildlife also gave advice and suggestions. Several capture attempts were made by Ange, Dee and Dale using chest waders and nets, all to no avail. “Wilson” as he came to be known, was too wary and maybe too smart for his own good. He just wouldn’t come close enough for capture.

Throwing a net now seemed to be the best option for capture, but the frigid water and slippery shoreline made recovery efforts nearly impossible. The use of boats was abandoned as the family would simply fly away whenever they felt threatened. More and more it seemed that nothing more could be done to help Wilson. The only option left, was to hopefully, develop a bond of trust between the swan family and Dale.

Since he was familiar with Nanuuq (pronounced Nanook), the large yellow tagged (K46) male of the family, Dale volunteered to try to build on that trust through regularly scheduled daily feedings in the morning and afternoon. Dale and I are both involved in a winter supplemental corn feeding program meant to support the swans during the short times when the open water shallows freeze over. This was how Dale and Nanuuq first met. With us being around regularly, the plan was for Dale to try to feed the Trumpeters while I distracted the rest of the waterfowl by feeding them in another area.

After some experimentation with healthy supplemental foods such as lettuce, peas, corn and duck feed, it became obvious that Wilson could not manipulate such small particles of food, due to the ball being in his way. It looked more and more like Wilson would suffer a heartbreakingly slow death by starvation, had it not been for his ability to adapt and find a way to manage large pieces of whole wheat bread. 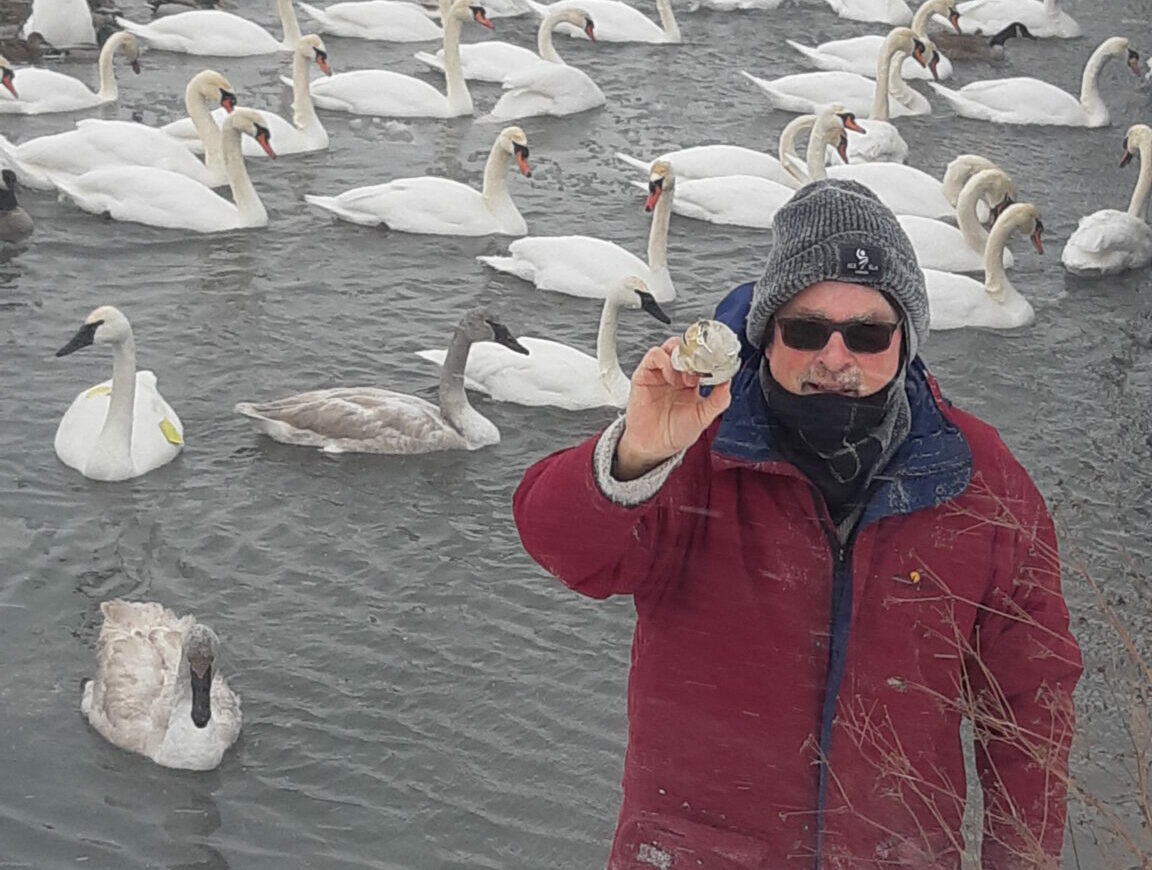 SUCCESS- Dale Smith holds aloft the remains of a tennis ball that was previously affixed to the beak of a cygnet. (Agombar/Barker photo)

While bread is normally frowned upon as a junk food for waterfowl, due to its lack of nutritional value, in this case, something was better than nothing. More importantly, it bought us time to keep trying for a rescue.

Now Wilson had a chance for survival and we fell into a quiet routine of daily feedings while always being at the ready if the opportunity to remove the ball came along.

Each day usually started with a “Where’s Wilson” conversation or text as we continued with our plan. The cold weather and water conditions made the prospect of a capture, much more easily said than done. Attracting Wilson also meant attracting the rest of his trumpeter swan family, compounding the difficulty of our efforts.

Nanuuq and his family are part of the Ontario Trumpeter Swan Reintroduction Program originally started at the Wye Marsh area (north of Toronto) back in the early 90’s. The tags on Nanuuq are used as identifiers meant to help scientists and naturalists track his location and migration patterns. Weeks passed, and word of Wilson’s plight got around on social media, bringing many well-intentioned people out to investigate for themselves. This posed a serious problem to our efforts until finally a request to the municipality got road barriers installed at the beach-park and marina docks.

These were placed to deter spectators and cars from approaching and helped to restore a more peaceful atmosphere from which we could work. Eventually the Trumpeters were coaxed closer and closer to Dale every day but Wilson remained frustratingly, just out of reach.

Often setbacks would occur, likely caused by well-intentioned individuals, who were also trying to help, but had missed with their efforts of reaching out for Wilson. This only made him more wary of us as he stayed at the rear of the family for several days. But again, almost a month from Wilson’s initial sighting, and in spite of some of this year’s worst winter weather, our patience and determination finally paid off.

While I drew the large flocks off with a good corn feeding at the end of the dock, Dale was able to feed the hungry Trumpeter swan family by hand, and eventually removed the ball from Wilson’s bill.

I was fortunate to witness the shock of surprise on Dale’s face when he came up with that ball. Wilson also looked a bit surprised, not realizing right away what had just happened.

In the next few days, Wilson has been observed to be back to eating his usual corn and seemingly suffering no major ill effects from his ordeal. Dale and I, on the other hand, now seem to have a lot of time on our hands. “Tennis anyone?” The success of this operation, would not have been possible if not for our dedicated team of countless volunteers, and concerned citizens who offered their support and time to save Wilson. Those that deserve special recognition for their efforts include Dee Newbery, Ange OZ McLean MacIsaac, and Andrea Kingsley for their assistance and advice on rescue techniques. In short, our amazing team of Swan rescuers were really “On the Ball!”

The Foster Forest Wildlife Orphanage is a local non-profit organization which relies on its volunteers and donations for the successful rehabilitation and release of local orphaned wildlife. Please consider a donation to them by contacting the centre at (613) 394-6667 or visit her Facebook page https://www.facebook.com/FosterForestWildlifeOrphanage

If you would like to help sponsor our Swan winter supplemental feeding program in the form of a donation for corn, please contact the County Farm Centre in Picton via the “Forest Wildlife Account”.   You can contact the Farm Centre at (613) 476-2171 and ask for the front cashier counter.

You are also encouraged to report sightings of trumpeter swans (especially those in lesser frequented areas) to the sites listed below, to help them track their location and migration patterns.