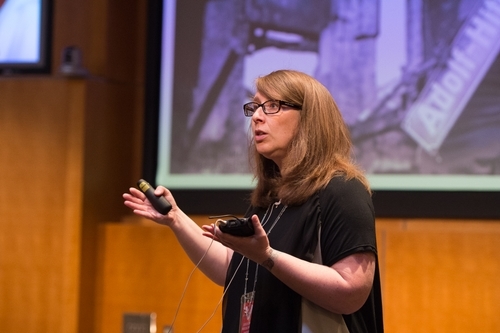 Melissa Mikel, Director of Education for the Friends of Simon Wiesenthal Centre for Holocaust Studies, presented the story of Faigie Schmidt Libman at Flashback February on Tuesday. (FSWCHS Photo)

As part of the municipality’s Flashback February history and heritage celebration,  Melissa Mikel, Director of Education for the Friends of Simon Wiesenthal Centre for Holocaust Studies (FSWC) and a former Prince Edward County  resident who now resides in Trenton, spoke over a virtual Zoom call about the Holocaust and how it connects to Canada.

The FSWC is a non-profit human rights organization committed to countering racism and antisemitism and to promoting the principles of tolerance, social justice and Canadian democratic values through advocacy and education.

“We always start with an introduction to Mr. Wiesenthal because we find most of the time people are not familiar with who he was,” stated Mikel. “He was a Holocaust survivor, he was an architect, he was an author, he was an artist, he also became known in his post-war years as a Nazi hunter. And we’re always very cautious to make sure we explain what it means to be a Nazi hunter. I had a group of 12-year-olds once I was working with that said “Well it means he goes out with a shotgun and he finds the guys who did this and he shoots them,” so that was a good teaching moment to make sure we clarified what Simon Wiesenthal dedicated his life to. His belief was in justice and in holding those who carried out atrocities accountable for their actions.”

Mikel talked about survivor Faigie Schmidt Libman whose story leads right to the Canadian connection, the relevance of Nazi hunting and why the FSWC is an important organization to have in Canada.

Libman was born in Kaunas, Lithuania in the late 1920’s as an only child. Her mother was a surgical nurse and her father owned an international bookstore. They spoke many languages and came from an affluent family.

“She (Libman) had a lot of privileges  growing up in this family and had family that emigrated to the US,” Mikel expressed. “And one piece she talks about is her Shirley Temple doll. For her fifth birthday she received a Shirley Temple doll sent from New York, she was quite excited because it was this prize internationally, her and her father use to go to the movie theatre to watch Shirley Temple and of course receiving this doll made her the envy of all of her friends, no one else had a Shirley Temple doll in Kaunas.”

In 1941 when Germany invaded and bombed Lithuania, Libman and her parents were forced to leave their home and move to what they referred to as a ghetto where Lithuanian Jews were sent.

The Kaunas ghetto, as was with similar ghettos, was a restricted area as Jewish citizens were forced to live and reside. One couldn’t simply come and go as you pleased and a pass was required in order to leave.

As a surgical nurse Libman’s mother was marched in and out of the ghetto on a daily basis, whether it was a work detail or to perform a specific medical task. This meant Faigie Libman at home a lot of times.

“There were times however once and a while where her mother would say to her ‘Your coming with me, we have special permission’ and Faigie (Libman) would go out on these work details as well,” said Mikel. “Faigie always says she hated going -it was so early in the morning, it was kilometres of walking and  it was this horrible experience of seeing prisoners yelled at and beaten. Faigie had a level of protection with her mom because her mother was a necessary but it was traumatizing for  seven-year-old child.”

On one of these rare excursions outside the ghetto, mother and daughter were returning late at night and Faigie recalled the most horrendous sounds that was coming from the settlement.

“They couldn’t figure out what it was and it just kind of seemed to ripple as everyone was being marched back into the ghetto,” Mikel said.  “Word was passed back that trucks had come in and all of the children and all of the elderly people had been rounded up and taken away.”

Libman’s grandmother was one of the residents of the Kaunas Ghetto taken that day and subsequently executed by the Nazi scourge.

“She (Libman) was devastated that day, all of her friends were gone,” Mikel expressed. “She said her friends were her lifeblood and now she was all by herself. If you meet Faigie today, her motto in life is “it will be good” but she can tell you specific days when it wasn’t and this was one of those days. In her devastation she did the only thing she felt could relive her which was the take her Shirley Temple doll and to smash her on the floor, which of course not only did she lose her friends now she’d lost her doll, which was really that source of hope.” 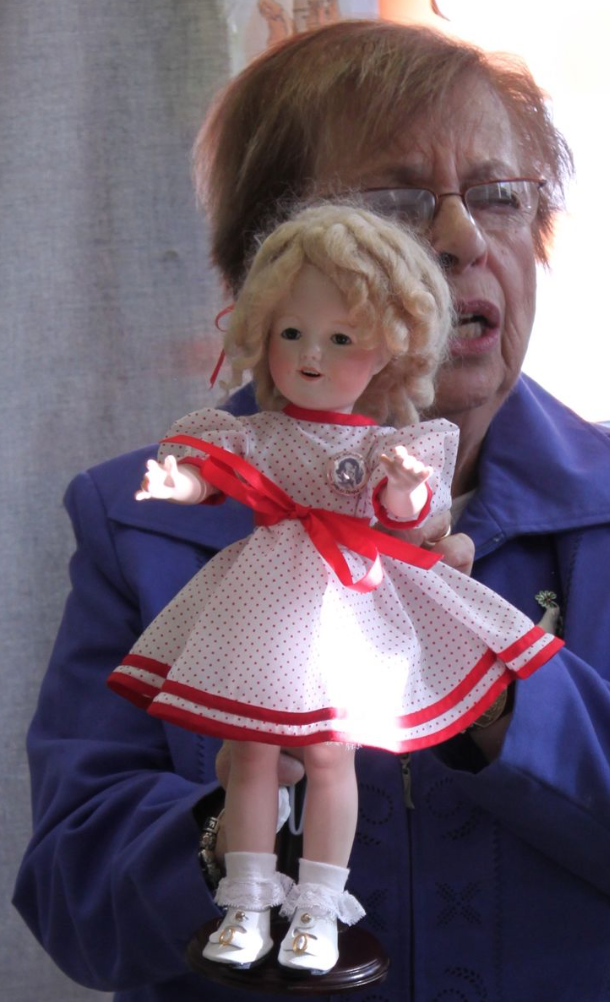 In 1944 the Jews of Kaunas were transported in cattle cars to concentration camps. Libman’s father was sent to and later died in Dachau. Libman and her mother were shipped off to Stutthof where they would be until they were liberated by the Russians in 1945.

“They were eventually liberated from Stutthof and started looking for her father,” said Mikel. “For many years, she didn’t know what happened to him but eventually they discovered he had been part of a group that were rounded up to be taken out on a death march and he refused to go.Libman’s father didn’t feel that she (Libman) would have survived so he lost hope and, in his refusal to g,o he was shot by one of the guards and never left Dachau. Sadly her father was murdered approximately one week before Faigie and her mother were liberated from Stutthof.”

Faigie’s mother had family in Montreal  managed to find their way to Canada first where Libman would meet her future husband Benny Libman, start a family, have four children together.

However, fate and upheaval would arise again as the young family were witnesses to the brewing FLQ crisis.

“She said ‘We’re not waiting this time’ t after recalling pre-war Lithuania and thinking everything would be okay,” Mikel said.

The family relocated to Toronto where Faigie took a position of Kindergarten teacher and enjoyed some nice years only to have the horrific memories of Stutthof and the Jewish Genocide come flooding back.

“One day in 1986,  Faigie came home from teaching, picked up the newspaper and had to sit down,” Mikel stated. “She called in sick to school the next day, went and closed all of the curtains and tried to close her self off from the world Why? Because Helmut Rauca lived two blocks from Faigie  in Thornhill.”

Rauca was known as a gardener, a nature enthusiast, loved classical music was regarded as a good neighbour since he came to Canada in 1950 and received his citizenship in 1956

“He had tons of praise from everyone who lived around him. The reality however was, that Helmut Rauca had come to Canada in 1950 and  had hidden his role in the war. He was the gentleman who had been standing on the mount at the ninth fort in the Kaunas gehtto where Faigie (Libman) and her family marched past him. Rauca would so nonchalantly selected out those who would live and those who would die. Over 40 years later, he was  living two blocks around the corner from her,” Mikel said.

Mikel explained Rauca lived a very successful life in Canada, had done very well for himself and had praise from neighbours who couldn’t understand or comprehend this idea of someone who was an accomplice to the murder of over 11,000 people was a nature lover and a good neighbour.

To this day, Helmut Rauca remains the only Nazi war criminal extradited from Canada to Germany to be held accountable and placed on trial for his crimes. Rauca died before he could ultimately stand trial.

Mikel went on to talk about Libman being one of the first survivors she heard speak when she started at the FSWC in 2008.

“When she (Libman) was telling her story and talking about her Shirley Temple doll,” Mikel said. “It really hit close to home because my mom is a doll maker and all I could think about was when I was seven, eight, nine years old, I had a doll for every Christmas. When I heard her tell her story and I realize we are world apart with our growing up and what our experiences were but the idea of this young girl destroying the only toy she had left, I just could’t imagine it.”

So moved by the story, Mikel had her mother craft a Shirley Temple doll for Faigie.

Now Shirley travels all over the world with Faigie (Libman) and has fuelled Faigie’s desire to share her experience and serves to remind the Holocaust survivor there is goodness in the world.

“That someone who had never met her, who who didn’t know her, would go to all this trouble of making her this doll, it’s her symbol of hope. And she sits right at Faigie’s bedside table right next to her bed when she’s not traveling and is her reminder of good people in the world.”