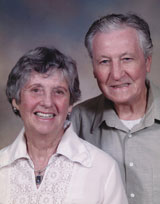 Verner Malcolm Booth
P. Eng. U of T, Class of 45
Retired Sub-Lieutenant, Royal Canadian Navy, WWII Veteran
Born in Toronto, Vern attended Lawrence Park Collegiate, and U of T, before joining the navy on Canada’s east coast. After the war, a business opportunity led him to New Jersey, where he met and married the love of his life, Hope. With a transfer to India, they began their family, first a daughter and then a son. Four years later, living in Montreal, the family grew by two more sons. By the end of the 50s they had settled back in Don Mills, Ontario, where they would remain until retirement. Hope and Vern then began an active and adventurous life.  With a house in Ballantrae, Ontario, and another in West Palm Beach, Florida, they would spend months on their 36-foot sloop in the Bahamas, and still find time to travel the world extensively on cruises with family and friends. Many years later, when Vern was widowed, he relocated to Prince Edward County; a few years at Quinte Gardens in Belleville, and finally, Hallowell House in Picton. He passed away in his 100th year, on Sunday, Feb. 21, 2021. Pre-deceased by his beloved Virginia Hope (nee Gastmeyer). Father to Lucinda Sprules (Robbie), Bruce Booth (Joanna), Todd Booth (Cynda) and James Booth of Haines Junction, Yukon. Vern is the proud grandfather of Erica Sprules (Stephen), Jamie Sprules (Teresa), Tye Sprules (Johanna), Britton Wasylenko (Blair), Teal Booth, and Daylen Booth, and great-grandfather to Bronwyn and Teagan Sprules, Orson and Phoebe Sprules, Riley and Isabel Wasylenko. Vern is pre-deceased by his sisters Joyce Girvan and Barbara Fletcher. He is fondly remembered by his many nieces and nephews. The family wishes to extend gratitude for the kindness and care Vern received at Hallowell House Long Term Care Facility.  Mr. Booth is resting at the Whattam-Hicks Funeral Home, 33 Main Street West, Picton (613-476-2450). In keeping with Verner’s wishes, cremation has taken place and a private family gathering will be held at a later date. Reunited with Hope, their ashes will be scattered together. If desired, donations to the Canadian Cancer Society in Verner’s memory would be appreciated by the family. Online condolences and to share memories of Verner can be made at: www.rushnellfamilyservices.com