It would only serve as the coldest of comforts to a Prince Edward County resident who believes in the ongoing experiment of this island municipality that divisive rhetoric doesn’t stop at the US Capitol building.

Last week saw an old and worn out chestnut get unwrapped at the Shire Hall horseshoe as freshman Councillor Andreas Bolik decried his colleagues for not doing enough to ensure woes of the ward of Ameliasburgh were properly addressed in the County of Prince Edward’s new Official Plan.

“It is a product that fails to incorporate a true understanding of all areas of this County and certainly not the needs and wants of Ameliasburgh residents,” Bolik said of the Plan. “Residents of Ameliasburgh Ward asked for very little from this municipality but they received even less. Unfortunately this is not new. It goes back to amalgamation 20 plus years ago. My constituents are tired of bank-rolling experiments and mistakes in other areas of this County.”

Bolik went on to vent how this current council started out two years ago with vim and vigor.

However, in his view, the new boss has become the same as the old boss.

Up until this point in his diatribe, Bolik was toeing the line between scathing criticism and secessionist speak. But then Bolik turned his sights on how the Official Plan addresses Prince Edward County’s key economic driver and “caters to tourism and tourists” and stated this:

“Those activities may be part of the County’s future, but they have little positive relevance to those of us in the northwest. For Ameliasburgh, single-tier governance has been an abject failure. This draft plan is a perfect example of that. I can only conclude that it is now time to work toward extricating Ameliasburgh ward from the unwelding and unworkable municipal structure with which we are currently saddled. As I already stated a number of weeks ago, I cannot, nor will I, support this plan,” he said.

In that last mouthful, Bolik laid bare his impassioned feelings towards the seat of municipal government and a united Prince Edward County.

This fallacy that if Ameliasburgh could just somehow escape the evil clutches of the Corporation of the County of Prince Edward and that a mixed rural/urban utopia awaits is not new but it certainly hasn’t been this exposed in a long stretch. Let’s imagine for a second this provincial government would entertain such a reversal and a generally low interest in municipal politics in the ward (Ameliasburgh’s voter turnout in 2018 was around 33 per cent) was somehow amped up enough to get a majority consensus on the wishes of the constituents via plebiscite and that was a yes.

What then? Walk into Quinte West or the City of Belleville hat in hand, hoping they will take on the new responsibility? Is it a certainty hard-done-by ratepayers are going to get a better shake on the other side of the bridge? Will those courted municipalities be willing to give Ameliasburgh a better bang for the buck than already established wards when it comes to the array of councillors? You know, like the one they have currently at Shire Hall?

If the answer is no to these questions, are the taxpayers in Ward 4 willing to take the hit to start building their own municipal staff, securing their own police services, fire rescue equipment, etc. If tax bill anxiety is high already, can you imagine if your municipal government was just starting out? Even at a phased in rate?

There’s sound reasoning why the Ministry of Municipal Affairs and Housing would crush such a notion out of hand and it’s for both the aforementioned reasons as well as setting precedent- If the province was to somehow successfully unscramble an egg and put the shell back together, how long would it be before there was a flood of requests from ratepayer groups in wards of various Ontario municipalities that feel thing don’t go their way enough down at their respective City Hall? Probably a nanosecond.

There would have to be evidence of malfeasance on a global scale before the Province would even think of going down that de-amalgamation road. 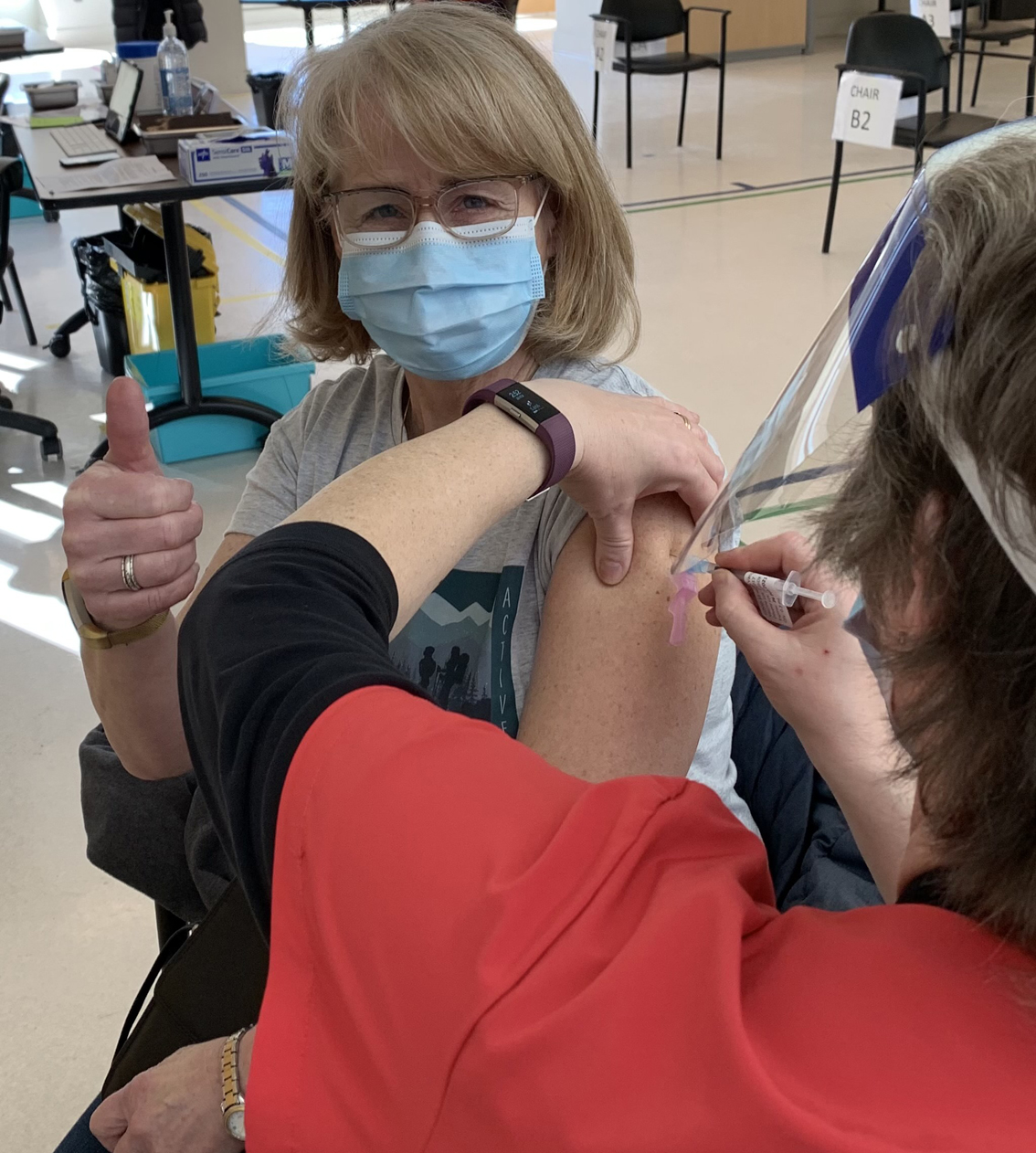 A SHOT IN THE ARM – Prince Edward County Memorial Hospital Emergency Room and Heart Function Clinic nurse Mary Stever was one of the first local QHC front line employees to receive a dose of the Pfizer COVID-19 vaccine last week. The COVID‐19 Vaccination Clinic for highest priority frontline staff and physicians at QHC was launched in the Education Centre at Belleville General Hospital a week ago and over 750 employees of the 1,000 contacted by the hospital group had registered for clinic. QHC stated they would operate internal clinics daily for the first nine days and then five days per week in subsequent weeks depending on supply allocations. (Prince Edward Family Health Team Submitted Photo)