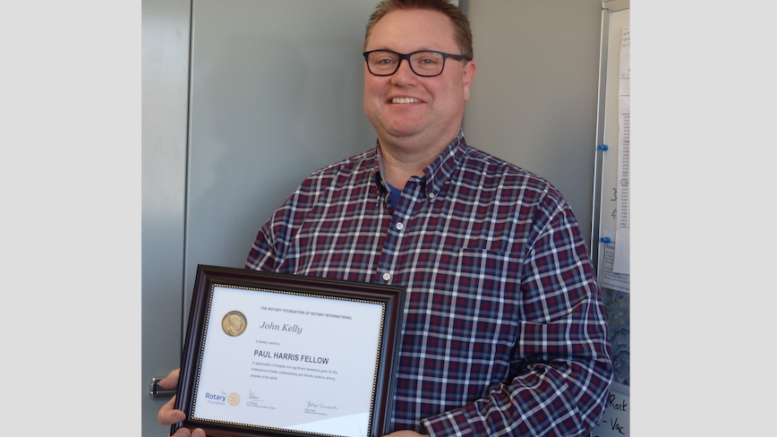 THIS ONE'S A KEEPER- Minor Hockey and Baseball coach and executive volunteer John Kelly was awarded a Paul Harris Fellow award by the Rotary Club of Picton last week. Kelly has volunteered with both organizations for upwards of two decades. (Rotary Photo)

A long time volunteer with the Prince Edward County Minor Hockey and Baseball Associations has been recognized for for nearly two decades of service to local youth athletic organizations.

The Rotary Club of Picton found fit on Tuesday to honour the legacy of volunteerism of John Kelly with a Paul Harris Fellowship Award. The Paul Harris Fellow award is Rotary International’s highest award and named after one of Rotary’s founders. This award has been given to people from all around the world such as Jimmy Carter and Mother Teresa and is meant for non-members who support local clubs and their initiatives while honouring Rotary’s mantra of “Service above Self”.

Kelly, a PECI grad, has been a stalwart volunteer with local minor baseball and hockey for upwards of two decades.

According to presenter  Kelly grew up in Kincardine, ON and moved to Prince Edward County when his father John Sr. took a position as head cheese maker at Black River Cheese.

Kelly himself was a standout in the local sporting scene and played for the Picton Pirates before settling down with his wife Tracey and starting a family.

Both his sons Ryan and Braeden followed in their parent’s footsteps as being leaders in local atheletic causes. When presenting the award at Rotary Club of Picton’s  weekly Zoom meeting, Past Club President Scott Lavender spoke of the importance and benefits of community activities that help children socialize and build fundamental skills outside of the class room environment.

“John is being recognized today for his outstanding achievement in his commitment to kids in Prince Edward County,” Lavender said.  “Most people on this Zoom Call today were probably involved in some type of Community activity as a child.  For some it could have been sports such as Hockey, Baseball, Gymnastics, Dance, or golf.  For others it may have been Scouts, Girl Guides, or Air Cadets.  All of these organizations have the goal of keeping our youth off the streets, away from video games and cell phones, and building qualities that will help lead them to success later in life.”

Lavender explained Kelly has been a major part in the successful operation of minor sports in our community and ran through a laundry list of accomplishments that included 17 years of coaching  youth hockey teams in Prince Edward County and, in several of those years,  was on the staff of multiple teams.

Currently, Kelly serves as he has for the last 16 years on the PECMHA Executive with his main duties being the Ice Scheduler. Kelly also sits on the Arena Board, assisted with the fundraising and the planning for the new Wellington Arena , served Ice Scheduler and a Volunteer for the Annual Milk Tournament as well as several volunteer positions with the Wellington Dukes and  Jr. A Tournament and showcase committees.

On the diamond, Kelly coached baseball teams in both Prince Edward County and the Belleville Royals for 15 years  connsectutively, again usually coaching multiple teams each year. He was also involved in the construction and organization of Wellington’s Field of Dreams baseball diamond.

“I want to make a couple of key points about the list that I just went through that need mentioning,” Lavender added. “Several times he coached teams that his two sons were not a part of including last year when he helped coach my youngest son’s hockey team. There are countless times when a timekeeper would back out in the last minute and John would go the rink and run the game clock so kids would be able to play hockey and parents and grandparents could watch. There are countless times in each year where John has picked up a young man for a practice or a game because his parents could not or would not give them a ride. As well, there were numerous times when John would pay for a kid’s dinner or even hotel room when his parents could not or would not be able to provide the money to do so.”

Based on his own experiences with the local minor hockey executive, Lavender estimates that with all the dual coaching and staffing roles and times spent attending meetings, Kelly has put forth around 15,000 hours of volunteering over the last two decades.

“I have spent most of my life in this community and I can not think of too many people that have that kind of volunteer commitment in their resume’s,” Lavender said. “ To sum up, I can not think of a more fitting community member to be recognized with a Rotary Paul Harris Fellow than John Kelly. “

Kelly thanked the Picton Rotarians for the esteemed honour and appreciated the club acknowledged volunteer efforts through the Harris Fellow award,  particularly in a small community like ours.

“I also extend appreciation to Rotary for all the support the club has given to minor sports over the years,” Kelly said. “I know they’ve picked up the tab for kids when they were on the sidelines because of registration fees.”

While the numbers are far too many to count at this stage, Kelly admitted he’s had a lot of fun working behind the scenes  with a great number of like-minded volunteers who shared in the goal of making minor hockey and baseball available for the children of Prince Edward County.

“I do take quite a bit of pride in the number of kids I’ve coached and now that they are getting older, it’s great to see them maturing into successful members of our community,” Kelly added.