To a man, the former senior councillor representing Hallowell will typically bristle when talk of Sandbanks Provincial Park comes up in conversation.

Living within the belly of summer’s biggest beast here will do that. Your humble scribe could only imagine what it’s like trying to run a beef and grain crop operation at Prince Edward County’s version of Grand Central Station. This past summer particularly.

Fair disclosure dictates we remember Keith MacDonald operates MacDonald Farms on ground he sold to the province about 30 years ago with the stipulation the former MPP and Allan Cup Champion could lease the farm land back from the province and live at his home along County Road 18 for as long as he wants. Compared to the price of real estate today in Prince Edward County versus what the going price of an acre of farm land was in the mid-1980’s, there would be some serious brow furrowing when looking at the numbers.

While the money left on the table has compounded twenty fold, the lease at least allows MacDonald to dictate the path of his agriculture activities and remain on land that was in the family for five generations.

Congestion, noise and trespassers aside, what rankled MacDonald the most in his conversations with your humble scribe concerning the park was the way his parent’s house was left to sit and be ruined through the ravages of dereliction and time by the Ontario Parks system. Norman and Aoda MacDonald’s farm house became such a shambles, such an eyesore that even Keith wished sometimes the Ministry would take down his parent’s former home so no one who could recall the glory days of Lakeland Lodge would drive by and see the house in its current and dilapidated state.

Many years ago, it was the park’s pledge in their Management plan buildings like the MacDonald and Hyatt houses would be kept up and not fall into disrepair but the shirking of that mandate is why the situation is as we find it currently- citizens who deeply value history upset over erasure of County heritage by an indifferent provincial body that could and should have done something sooner to shore up these former homes.

One only needs to look north a few kilometres as the crow flies and see the success that is Maple Rest Heritage House. The brick farm house on the shores of West Lake was carefully restored from a state not unlike the Hyatt for MacDonald houses in 1998 and now stands as one of the Ontario Parks system’s most popular roofed accommodations. The former Barrett family home might have been a new foray into these types of rentals for the Ontario Parks system at the time but the volume and its mushrooming popularity should have indicated to someone in the bureaucracy of the Ministry that these types of value-added accommodations in a history-centric community like Prince Edward County could be good business.

The Ministry is indicating they intend to build new roofed accommodations at the MacDonald and Hyatt sites once demolition is complete and if that doesn’t indicate this is government process, we’re not sure what will. A few ounces of preventive maintenence over the years could have equalled pounds of cure today.

Instead, the wrecking ball recipe seems to be the Ministry of Environment, Conservation and Parks’ go-to move.

And why not? After the buildings have become a squirrel and raccoon paradise and an easy mark for any degenerate with a rock and a strong throwing arm, it probably makes the most sense at this late, late stage of the game.

We hope that for the sake of County heritage, a proper assessment of the homes can take place to see if buildings can be rehabilitated and re-purposed. If possible, there should be some sort of effort to save them-even if it’s a facade that incorporates what existed with a new build.

But no matter the outcome, this sad episode is another instance where Provincial Parks bureaucracy has remained disconnected from this community, operating in a silo without much care for the wants and wishes of the citizenry who live here. 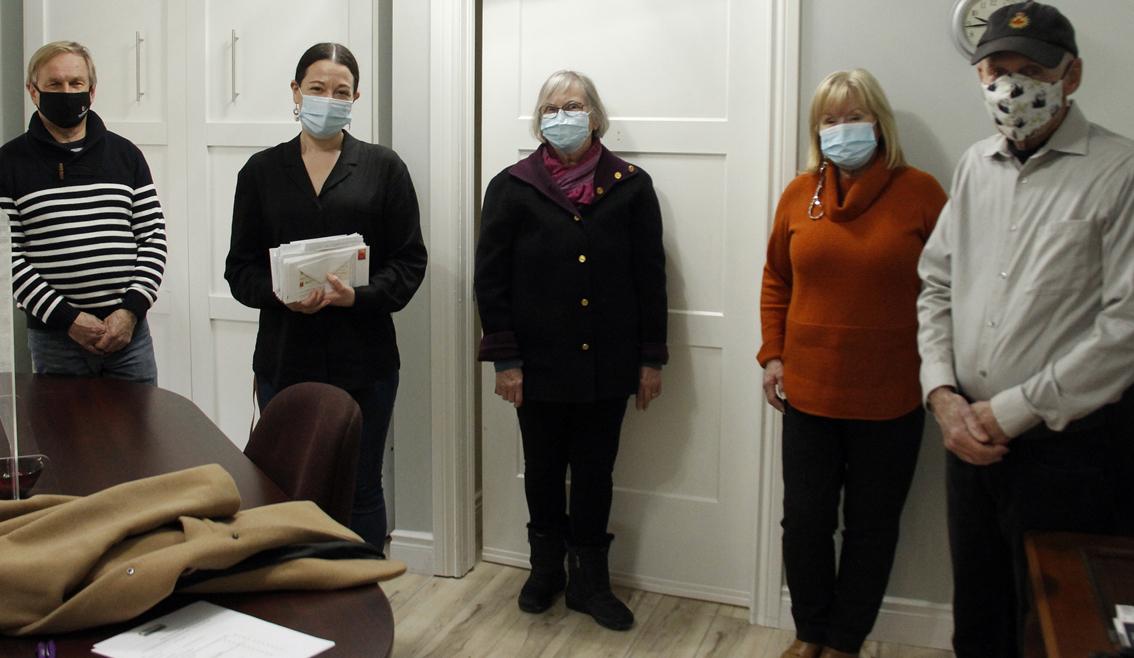 PEOPLE WHO CARE – The local philanthropy group 100 People Who Care Prince Edward County voted to support an Alternatives for Women initiative and presented cheques totalling $8,800 to the women’s shelter last month. (Second from left) Alternatives Executive Leah Morgan accepts cheques from 100 People group members David Fox, Marion Hughes, Judy Sanders and Richard Byers. Morgan said the funding will go towards improvements at the women’s residential shelter. “This is so generous, thank you, it means so much,” expressed Morgan “We need to put in a parking lot for the residence so this is really going to help with that project and help with maintenance and repairs that we have yet to schedule and secure funding for.” (Desirée DeCoste/Gazette Staff)