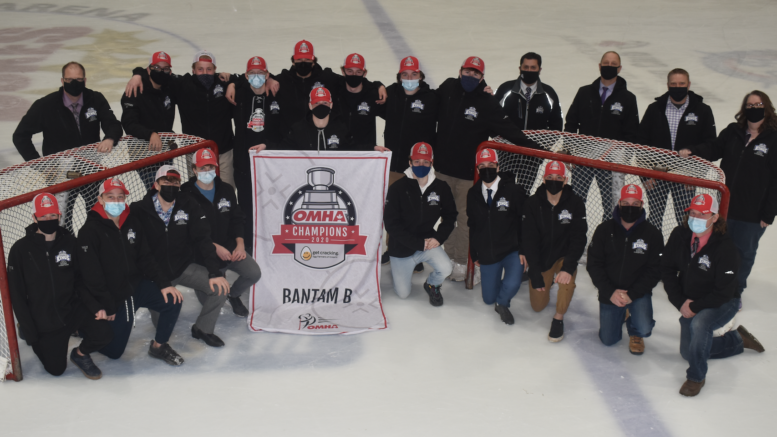 If you listened closely to the echoes of a sparsely populated Lehigh Arena Saturday evening, you could almost hear the faint echoes of what was supposed to be.

A blaring air horn and Queen’s victory standard ‘We are the Champions’ trying to keep pace with 1,000 screaming fans as the Lehigh Bantam B Prince Edward County Kings mobbed goaltender Austin Stock in the moments after earning the minor hockey association’s first Ontario Minor Hockey  championship in decades.

Hugs and tears of joy in the stands amongst parents and grandparents as the exclusive red hats signifying Ontario Champions were distributed amongst the players by OMHA representative Suzanne Terpstra. Superfan and facebook team broadcaster Amy Steen yelling at the top of her leather lungs “I TOLD YOU WE WOULD WIN!” 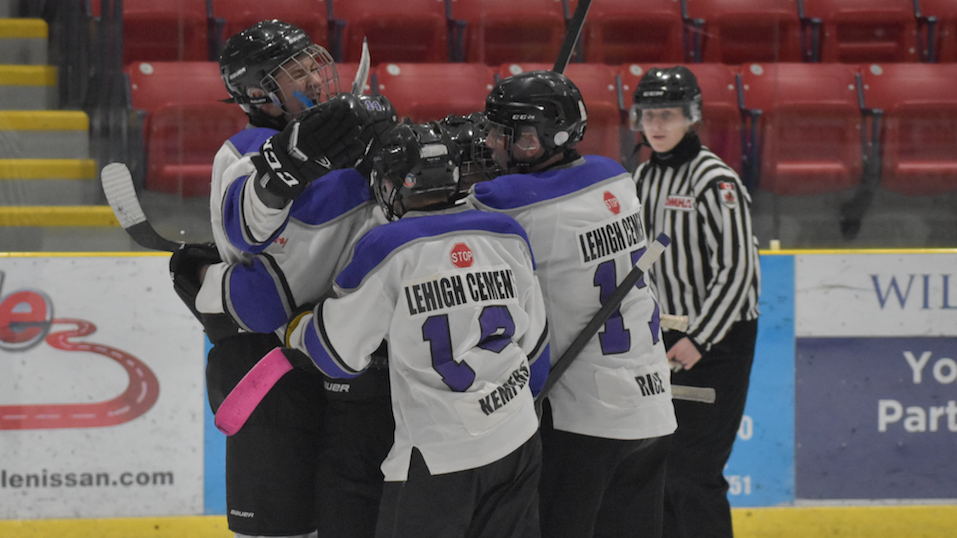 Coaches Chris Rice, Adam Smith, Peter Moyer and Dan Kempers looking for their kids on the ice to give them an extra pat on the back and let them know how proud they were to see this heroic moment that will standout in the lore of Prince Edward County hockey history.

The Kings were All-Ontario Champions for 2020. The famous dressing room quote of late NHL Coach Fred ‘The Fog’ Shero that goes “Win together today and we will walk together forever” had been realized by a group of local players.

The club was finally presented its banner on Saturday night at Lehigh Arena but to far less fanfare that was befitting a team of local hockey players that marched through the regular 2019-2020 season with a 14-3-2 record before besting Ennismore, Elmvale and Listowel in the OMHA play downs before setting up an All-Ontario Championship series against the Ayr Flames.

With the Wellington Dukes set to take on the Trenton Golden Hawks in Round 2 of the OJHL playoffs and the Picton Pirates and Napanee Raiders facing off in the Tod Division finals, the Kings deep march into the OMHA play downs had set up a local hockey lovers dream sequence for the third week of March a year ago.

Everyone reading this space knows what happened and it was nearly one year to the day on Saturday night when COVID-19 took control of our daily lives and changed the world forever, washing away the Kings All Ontario hopes along with a billion other hopes and dreams with it.

In the summer the OMHA declared both entries 2020 Champions and the players and parents of the Kings gathered one last time to fete the starry season past and get a gander of new OMHA Champion banners that will hang at both LeHigh and Huffs Estate Arenas.

Speaking from experience as a member of a 1996 PECMHA Midget AE entry that won an OMHA championship against the Watford Rotary Club Kings, Association President Steve Payne told the players  that the hats their your heads, the rings on thier fingers and the banner in the rafters is what the team competed so hard to earn last season.

“But the memories of your playoff run, the friendships you’ve made with your teammates is what will live on for the rest of your lives,” Payne said. “Your minor hockey careers may have certain highlights you will remember as you get to be older and have children that play but 2019/20 hockey season specifically the playoffs will continue to stand out. You won’t forget each other and I’m certain later on you will find reasons to get together and reminisce. I know this from experience because I’ve been there, and I know that a few others in the room have as well. And I could still tell you about every player on that “All Ontario Team” and our road to the championship.”

While the players can only be recognized as champions, the lingering inability to have some sense of finality from the 2020 playoffs will be an unfortunate byproduct for all 2020 OMHA finalists. That can ring especially true for this Kings club as long OMHA playoff runs to the finals for PECMHA clubs aren’t exactly commonplace in recent years.

Getting so close to the dream and not being able to play for it clearly remains emotional for Rice as he addressed the players and parents for the final time.

“It was an awesome year,” Rice said with his voice cracking. “I’m so proud of the players, the parents and our group. I will remember this season for the rest of my life and it means a lot to me.”