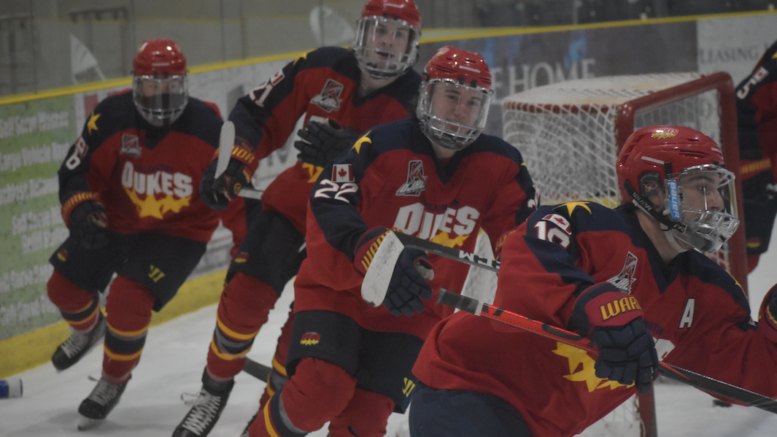 ALL ABOARD- Led by goal scorer Jacob Vreugdenhil, (From Left) Jacob Dietz, Mason Reeves and Cooper Matthews head to the Wellington Dukes bench with a quickness after making the score 2-0 for the home side on Friday afternoon. (Jason Parks/Gazette Staff)

The race towards the 2021-22 Ontario Junior Hockey League season has started for the Wellington Dukes.

The club is hooking back up with the Trenton Golden Hawks for another eight game series over the next few weeks but unlike the Hasty P’s Cup that was vied for last fall, this set of contests is much less about getting ready for action in the OJHL now and more about preparing for play next winter.

Those with connections to the hockey hierarchy are hearing that those participating under the Hockey Canada auspices could be back on the ice and playing regular season games by January 1, 2022, if not sooner if the COVID scourge subsides in light of a critical mass of vaccinations among the populace. 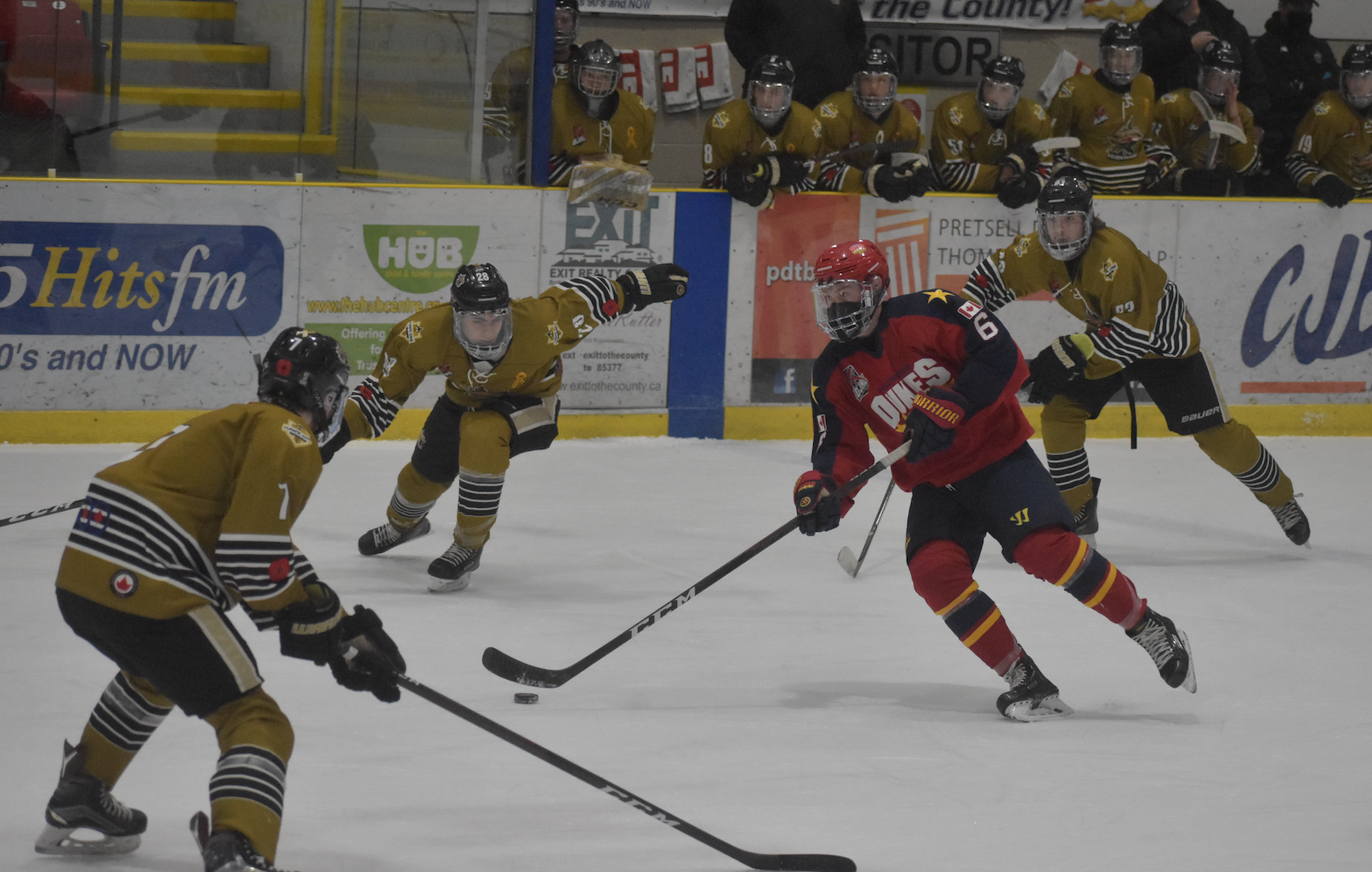 Of course, the phrase “The best laid plans of mice and men…” could be expanded to include junior hockey organizations.

Newly minted Dukes General Manager Rob Ridgely was watching his club put the finishing touches on a nice first period of Game Two of what organizers are calling a developmental  between the two arch rivals on Friday at Lehigh Arena en route to a 4-1 win.

Friday’s home victory came on the heels of a 5-0 shutout in Game 1 in Trenton two days prior.

Ridgely said that while the club will be limited to training and prospect camps in the coming months due to Hockey Canada and Ontario Hockey Federation protocols and restrictions, the series against Trenton allowed for the Wellington braintrust to see how some of the fresh faces preform under the direction of Head Coach Derek Smith.

“We really want to build around team speed and have a quick team that’s really tough to play against,” Ridgely told the Gazette. “We don’t know what OJHL regular season play will look like next winter but having an uptempo style of play when the puck drops for real is what we are aiming for.”

If uptempo is the operative word than Wellington had to be happy with their overall game on Friday and particularly with the opening period’s action.

Wellington took a 2-0 lead to the intermission after peppering Trenton starter Joe Ranger with 13 shots and allowing only two on their own mesh mansion.

Wellington’s Barret Joynt opened the scoring at the end of the only power play of the stanza, pouncing on a loose puck in the slot and firing a bullet past Ranger at the 18:06 mark.

Just 43 seconds later, Mason Reeves made a nice feed off the rush to Quinte Red Devils grad Cooper Matthews who was able to give the puck to Jacob Vreugdenhil with time and space in the high slot.

The second year Duke ripped a shot over Ranger’s shoulder that popped the water bottle off the top of the Trenton net and the tally stood up as the eventual game winner.

In the second, Trenton was a much improved club and got the stanza’s only tally. Mid way through the frame and on the power play, Wellington starter Ethan Morrow made a nice stop at the goal mouth but Golden Hawk Sam Williamson was able to knife a forehand effort to the top of the net for Trenton’s first tally of the series at 7:50.

The game remained 2-1 until late in the contest when Vreugdenhil doubled down, taking a nice Ben Hamilton feed at the Trenton line and bursting in on Ranger before depositing a backhand into the Golden Hawk net with 2:25 left.

Picton Pirates grad Jacob Dietz would send a puck into the vacated Trenton cage with 18 seconds left to make the Game 2 final 4-1.

The Development Series was kicked off Wednesday afternoon at the Duncan MacDonald Memorial Gardens in Quinte West with a 5-0 Wellington whitewash.

After scoreless first, Wellington stepped on the gas in the second frame with four goals put past Trenton starter William Nguyen.

Matthews broke the ice 35 seconds in off a nice set up from Vreugdenhil.

Under half a minute later and with the team still buzzing, veteran  James White got into the act with his first of the series.

A Cole McGuire power play blast at 7:47 off a set up by Matthews made it a 3-0 spread and then fellow blueliner Aaron Brown collected his first in a Dukes uniform, converting a White pass at the 16:14 mark.

Tyler Ignazzitto and Reeves both had a paid of helpers in the second period of Game 1.

OJHL vet Eli Shiller had 25 saves in a perfect shutout effort for Wellington.

The clubs hook up for Game 3 in Trenton on Wednesday afternoon and Game 4 in Wellington on Friday afternoon.