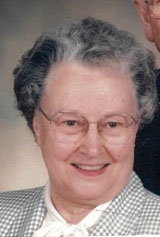 Formerly of Manor on Loyalist Parkway and Ferguson Street, Picton, Hilda Jean Hillard peacefully entered into rest on Thursday, March 11, 2021 at the H. J. McFarland Memorial Home, Picton. Hilda Hillard (nee Hagerman) died in her 100th year. She was the daughter of the late Merrill & Jean Hagerman (nee Vincent) and wife of the late Cyril Hillard. Hilda is predeceased by her brothers Lyle Hagerman (late Irene) & the late Colin Hagerman (surviving Lois) of Kingston and she will be fondly remembered by her many nieces and nephews, especially her cherished niece, Anne Hagerman of Picton. Mrs. Hillard is resting at the Whattam-Hicks Funeral Home, 33 Main Street, Picton (613-476-2450). In keeping with Hilda’s wishes, there will be no visitation or funeral services. A Graveside Service will be held at the Glenwood Cemetery in the spring. If desired, donations to Prince Edward County Memorial Hospital Foundation “Back the Build” or the Church of St. Mary Magdalene would be appreciated by the family. Online condolences at: www.rushnellfamilyservices.com