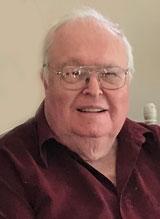 August 9, 1936 – March 8, 2021
(Retired Captain, Air Canada)
It is with great sadness that the family of Carl K. Martin announce his passing after a battle with cancer. Carl died peacefully at home surrounded by the love of his family. He was predeceased by his parents, Ken and Mona, his youngest brother Ralph, and stepdaughter Alexandra. Carl is survived by his brother Bill (Dorothy), his wife Patricia, and children and stepchildren Pat, Chris, Andrea (Mark), Frances (Mike), Gregory (Jen) and Amanda (Eric). He is also survived by grandchildren Andrew (Leanne), Taylor (Irene), Jamieson, Avery, Von, and Jazmine, great-grandson Easton, and a second great-grandson soon to arrive whom he had hoped to meet. Carl was one of those very fortunate people whose life’s work was also his passion – flying. He cherished his time as a pilot and then found much fulfillment post-retirement instructing in the Simulator. He loved sailing, enjoying many years on the waters of Lake Simcoe and later Lake Ontario in the Quinte area. He also found peace and contentment at his “Ranch” in Prince Edward County, making many friends in the area. He appreciated the art of a good conversation. Above all else, he loved his family. He took great interest in, and was a great supporter of each member. His natural curiosity, thirst for knowledge, his kindness, his gentleness, and easy laugh were all gifts that he passed on to his family and we are all better people for having received them. He was not only a brother, husband, father and grandfather to his family, but a friend. Arrangements have been entrusted to Scott Funeral Home, Mississauga. As per Carl’s wishes cremation will occur and no service will be held. Memorial donations in Carl’s honour may be made to the Canadian Cancer Society.