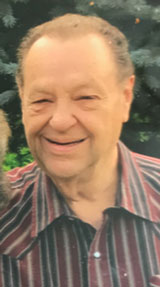 Kenneth William Ireland, age 92 and resident of Trillium Nursing Home in Kingston, passed away in the company of his son, Paul at Kingston General Hospital on Sunday March 21, 2021. Ken was born in Hamilton, Ontario however, lived most of his adult life in Prince Edward County with his wife, Ruth (deceased January 2016) and their four children. Ken was a devote Christian, serving his Lord and Saviour in many capacities within the church. He was a sports enthusiastic being a staunch fan of the Hamilton Tiger Cats. For many years he performed selfless service as a manager/coach of minor sports both in Hamilton and Picton. Ken was an avid reader, a bird watcher and one that loved sharing his time with his children and grandchildren. Ken is survived by his daughter, Lori; his son Brad and wife Kathy; his son Paul and his wife Lorna; his daughter, Elaine and partner Terry as well as four grandchildren; Sydney, Jeremy, Curtis, Emily and two great-grandchildren; Laila and Ellie. Ken is resting at the Whattam-Hicks Funeral Home, 33 Main Street West, Picton (613-476-2450). Visitation will be held on Friday March 26, 2021 from 1-2 p.m., with Funeral Service to follow in the Chapel at 2 p.m. Graveside Interment dedication will be held immediate following at the Cherry Valley Cemetery, in the family plot. Please call ahead to register for the visitation and funeral service during business hours. Donations to the Prince Edward County Memorial Hospital Foundation in Ken’s memory are appreciated. Online condolences at: www.rushnellfamilyservices.com