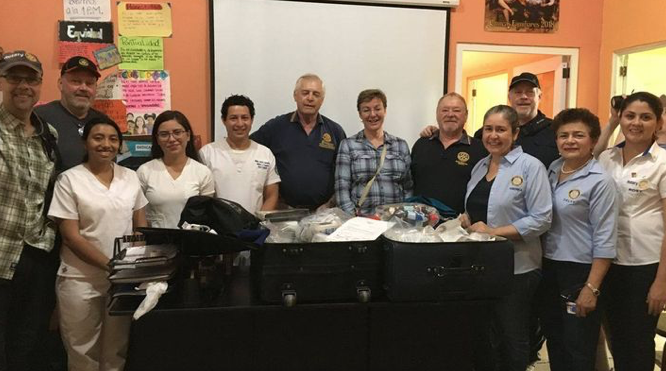 A first-hand account and update of an international project supported by local Rotarians and aimed at improving healthcare for the people of Chiquimula, Guatemala was on tap for the members of the Rotary Club of Picton Tuesday.

As part of the club’s weekly meeting that are now held via Zoom,  Rotarian Claire Conway of Oakville and the Trafalgar Rotary Club spoke on the latest international project receiving Rotary’s Global Grant in the Guatemalan city of 111,000.

The Global Grant was used for improving healthcare for the poor through the equipping and furnishing of the Centro Universitario de Oriente (CUNORI) Clinic in Chiquimula, Guatemala.

The clinic is located on the campus of CUNORI (also translated to University of San Carlos of Guatemala) Chiquimula where medical students rotate through the clinic in their fourth year. The clinic serves the impoverished  of the community with some people travelling three hours by bus just to get attend the clinic.

“When we first started this project we said what do you need and the clinic said ‘We would really like a scale for the babies and some suture kits’,” Conway told her fellow Rotarians. “That’s the kind of things they didn’t have and I said “No we are thinking bigger and better’. I was familiar with the rules for Government Canada funding at the time and Global Grant funding at the time and I knew this would be a project that would qualify for both and could easily be done.

Conway said the Trafalgar club really liked this project was that this initiative was improving patient care for the poor people of the city located in the southern portion of the Central Amercian country within 200 km of the Honduran and El Salvadorian borders.

“They have very good hospitals there if you pay, the hospitals that are free are over crowded and  ou don’t get good hospital care. They don’t have the necessary equipment However, they do have over 1,000 medical students at the University and they are all very eager to learn,” she added.

Conway went on to speak about some statistics they discovered after doing a census of Chiquimula Guatemala- a necessary Community Assessment portion of the Global Grant.

“To tell you a bit about Chiquimula,” Conway stated. “71 per cent live in poverty and the United Nations standard for poverty are under $2 US a day. 41 per cent live in extreme poverty so that is less than $1 US a day and all of them are indigenous Mayan people who tend to live in very remote villages. Only 56 per cent of births take place in a hospital and 19 per cent of children die before the age of 15. Almost 20 per cent of mothers giving birth as teens. These are truly horrific statistics and again it’s a country of extreme divide, the Spanish descendants are doing very well and the indigenous people not as well.”

In terms of reasons for hospital visits,  31 per cent were from bacterial infections while 19 per cent for pneumonia. Both are highly treatable if one can afford to go to a hospital or get access to a hospital.

Conway joined the Rotary Club of Oakville-Trafalgar back in 2013 because she was impressed with its international work. Conway is now a permanent member of the International Committee of the club and has served five years as Chair of the committee, currently taking a break from the board. She has also worked with Rotarians from Milton, Oakville and Burlington to form a cluster of of clubs interested in international works.

“We call ourselves the M.O.B,” said Conway. “Which is the clubs in Milton, Oakville and Burlington, there is eight clubs, and we work together doing international projects.”

Conway noted the clinic previously only kept medical records for three years due to lack of storage for the paper records.

She added that had the project not been approved for a Global Grant, the MOB would have taken it on anyway

“It would have just taken longer to get the money, but what I found with Rotary is if you have a good project, the money will come…you have just got to take that giant leap,” she said.

Now the clinic building is renovated with new washrooms and air-conditioning installed in rooms that needed it.

“It’s always a great opportunity to get a chance to see where the dollars are going and how they are making a difference for people you will never meet but whose lives will be changed because of generosity,”  Jones noted.

In total, 19 Rotary Clubs including the Picton Club, the Rotary Foundation and the Government of Canada have all contributed to the project.

For more information on the Picton Rotary please visithttps://portal.clubrunner.ca/1145/sitepage/about-our-club/rotary-club-of-picton