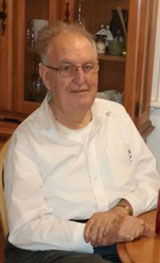 1931 – 2021
It is with great sadness that we say goodbye to Forrest Clarence ‘Buddy’ Rowley. Buddy died of natural causes on the morning of March 12th, 2021. He will be sadly missed by all of his nieces and nephews in the Montreal area, and by his step children, Kathy Henry (Bob), Phil Rowe, David Rowe (Diane), George Rowe (Ronda). Grandpa Buddy will be greatly missed by his grandchildren, Heather Henry (Nick), Ellen Henry (Matt), Parker Rowe (Jill), Emerson Rowe, Christopher Rowe (Monica), Catrina Rowe and his new great granddaughter Dorothy Ann Rowe. He was born in PEI, one of 4 children, and grew up in Montreal where he met and married Norma (1934-1992). They had a son John, in 1964, who died tragically in 1972. He later married Dorothy Gittins Rowe in 1993. Dorothy passed away in 2006. A few years later he married Fran Insley. Fran passed away in 2009. Buddy was a lifelong member of the Legion, and he was a true gentleman. He loved animals and children and they loved him. Whenever asked if he needed anything or how he was he always answered the same way… “ I’m happy”. Special thanks to Dr. Scrivens who took great care of Buddy over the years and was with him at the end. Buddy was laid to rest at Glendale Cemetery in Etobicoke next to his son John and wife Norma on March 19th, 2021. Online condolences may be shared at www.ainsworthfuneralhome.com
Memorial Donations to the Prince Edward County Memorial Hospital Foundation (www.pecmhf.ca) would be appreciated by the family.  Arrangements entrusted to Ainsworth Funeral Home, 288 Noxon Avenue, Wellington